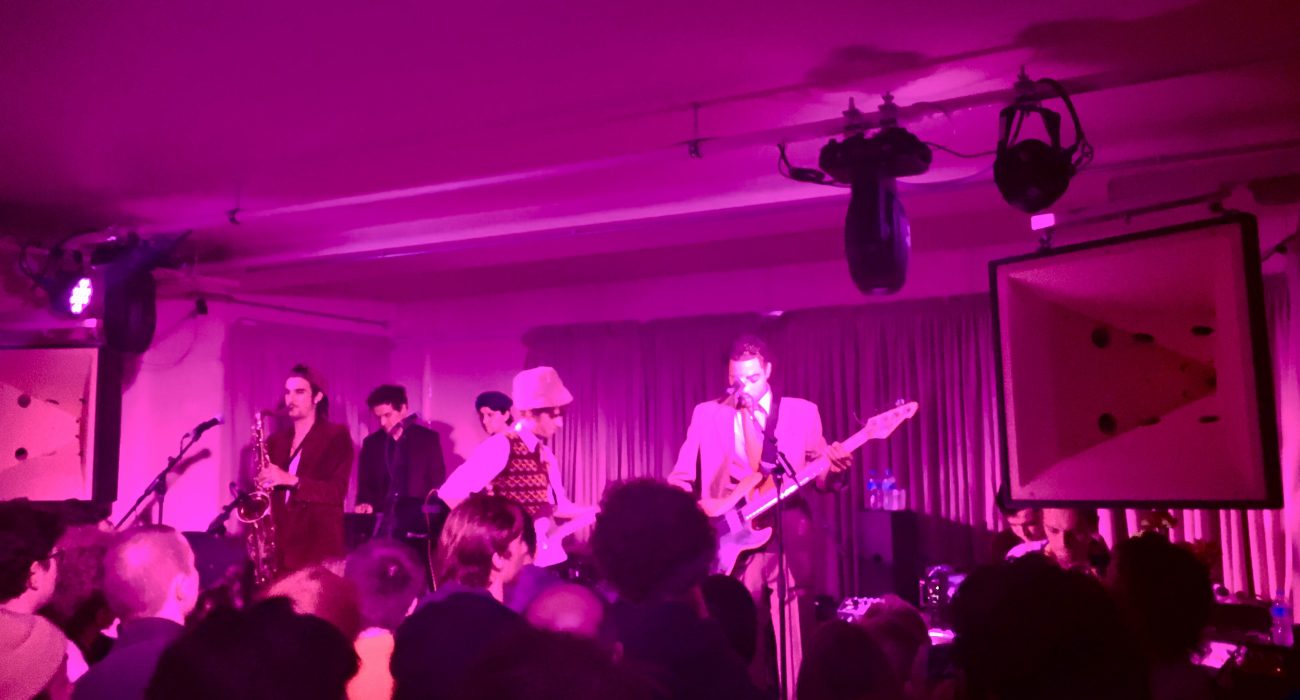 “I am an insecure man,” come the looming, opening words of singer Saul Adamczewski. Insecure is perhaps something he needs not be this evening. Straying away from his Fat White Family roots, the Insecure Men side-project, formed with former schoolmate and childhood frontman Ben Romans-Hopcraft, has very much become a band of its own right, having sold out YES’s 250 capacity Pink Room.

Insecure Men aren’t the first to grace the stage for their set; forever the more idiosyncratic of performers, the band choose to kick off the show with weirdness. First comes a woman dressed in funeral attire handing out, what resembles memorial programmes bearing Adamczewski’s face on the front page, to who she deems to be “sexy” members of the crowd. Next, a man of equal formal dress delivering a rousing, if a little comical, speech on the subject of death, before introducing “the Devil’s favourite pop band.”

It would be daring to say that there is great variation in how this Devil-pleasing pop band’s songs sound but when performed live something just works – with ease these melodies weave together and you find yourself transported to the dream-like world of emotion Insecure Men have created.

From the sound in question, you don’t get the feeling that if you overheard a tune of Insecure Men playing in a bar you would immediately sense it was by a band that takes itself not at all seriously. This is a band, however, who have recently revealed their studio cover of Peter Andre’s ‘Mysterious Girl’ to the world.

“This is a song about the working day – this is a song about grafting,” comes Adamczewski’s conspicuous London twang to launch the band into a brand new track. Struggling on the working grind is perhaps the most relatable of Insecure Men’s themes. Pivoting again around a fascination of death and celebrity demise, there are lyrical tales of Whitney Houston and Cliff Richard laced within their discography.

There’s something about the dulcet tracks from Insecure Men’s eponymous debut album – tracks that make up the rest of tonight’s hour-long set – that is steeped in nostalgia. Even deep within the band’s more upbeat songs, there are undertones of sadness and of longing, if you choose to listen hard enough. But take these songs, ‘Teenage Toy’ and ‘I Don’t Wanna Dance (With My Baby)’ to name a couple, and throw them on stage and the effect is quite different. Instead, there is simply a gathering of beaming life-loving music fans enjoying a few minutes of joyous, carefree abandon.

“Hail Satan!” Adamczewski brashly instructs the crowd before removing his hat and turning his head to the side with a look of sincerity, as if posing for a Napoleonic military portrait.

The oddball move marks the end of an oddball performance of not so oddball music.