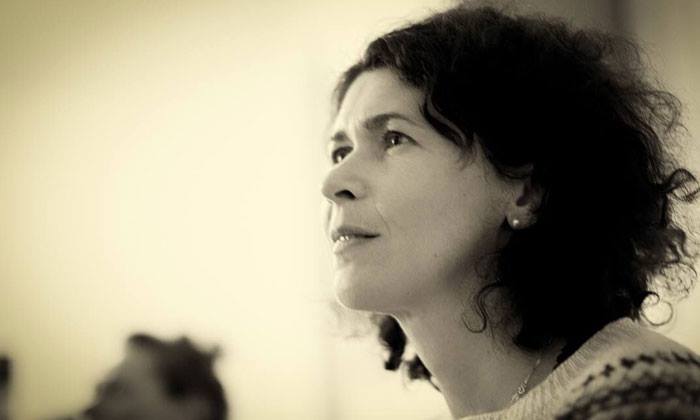 As part of the Manchester Literature Festival, the Martin Harris Centre welcomed writers Sasha Dugdale and Nick Laird to read from their latest poetry collections. The crowd, made up of established fans and newcomers to their works, sat in silence, absorbing the two poetry collections of beautiful, complex verse. The two poets read together 15 years ago, and it was delightful having them both on stage together again.

The evening began with a reading by Nick Laird from his latest poetry collection, Feel Free. A former writing fellow at The University of Manchester, he was welcomed by an old friend, our very own John McAuliffe. Laird’s poems are dense with emotion and sensations presented through adventurous sounds and strong images.

His eponymous poem, ‘Feel Free’, is about a parent on night-feed duty, half-awake, half-dreaming. Amongst the many incredible lines, one which stuck out for me was, “When a photon of light meets a half silvered mirror and splits / one meets the superposition of being two, being twinned: and this repeats”.

This idea of twinning does in fact repeat throughout the collection: the twinning of the natural and the technological; the two times he felt the urge to reach out and hold his father hand ‘Silk Cut’; the feeling of “being in the midst of it/or on my own/ or both at the same time” in ‘The Vehicle and the Tenor’. There is a sense of sound behind the collection, the sound of “white noise machine […] Set to crashing wave”, a constant vibration, and this was heightened when read by aloud by Laird.

When responding to a question about his use of the “language of science” in his poetry, Laird responds: “One of the things you think about when you start to write seriously is you think, what can I write now that people couldn’t of written 10 years ago, or 20 years ago.” A New Scientist subscriber, it seems natural for Laird create a poetic diction which is saturated with scientific language, and there is something fascinating about the newness of the language dealing with universal experiences of love and grief, and ideas of the self, throughout the collection.

Next we heard from Sasha Dugdale, an acclaimed translator of Russian literature and the current writer in residence at Cambridge University, reading from her latest collection, Joy. Her poem, ‘Joy’, was the winner of the Forward Prize for Best Single Poem. It is a monologue written through the voice of Catherine Black, widow of William Blake. The title of the poem seems contradictory as it is a poem full of grief, but as Dugdale herself said, the grief of Catherine is one which can only exist when a joy you have known is gone and you are left “bonded to nothing”.

I also enjoyed Dugdale’s readings of her poem’s ‘Cutting Apples’ and ‘Ironing the Spider’. ‘Cutting Apples’ relays an experience when, while cutting apples, the speaker’s mind wanders, thinking about “absence, which so hates to be considered’. ‘Ironing the Spider’ draws a comparison to the “violence” of accidentally ironing a spider “resting in the pastel scent of laundry” to the “railway victims on the Pskov station board” who had been run over by the train during the winter while using the tracks as roads.

The influence of her travels and passion for Russian Literature can also be seen in her response to Svetlana Alexievich’s book on women’s experiences during the second world war, The Unwomanly Face of War. Dugdale is the master of crafting believable voices, and the twelve parts of this poem each have distinct characters which allow the reader into experiences of war and conflict, with a focus on the female experience.

It was interesting to hear of Dugdale’s recent “obsession” with Eric Gill — a prolific artist accused of sexually assaulting his two daughters throughout their childhood. The second-to-last poem Dugdale read, ‘An Interview with the Keeper’, was written after speaking with Gill’s curator. Although not a poem in Joy, it speaks to current anxieties and struggles, especially those of women and men navigating their relationships with artists implicated in #MeToo scandals.

The caged beast of the poem is Eric Gill, but could be Harvey Weinstein, Louis C.K., or Azis Ansari. The keeper in the poem is Gill’s curator, or us. There is a sense of duality within the poem, the keeper pattern of looking and looking away at the beast, talking “into the night about [her] Janus neck”, her “conjoined sensibilities”. There is also the duality of the caged beast and the keeper, the way the speaker herself feels “confined” within her relationship, unable to escape and unable to detach.

Ironically, Laird sees little point in poetry readings, unless you want to see “what your favourite writer smells like”. I’d have to disagree. When spoken aloud poems open up in a way which is different to simply reading words on a page. Phrases you may have overlooked suddenly appear more vividly than before, and the sounds of the poems take centre stage. And a poetry reading adds another layer of interpretation — why does the author linger on a certain word or phrase? Why do they pause when they do?

All in all it was an exceptional evening of poetry, and I can’t recommend the two collections enough.