For those unfamiliar with the platform, Twitch is a service where people live stream content to an online audience. Starting life in 2011, it quickly became one of the busiest sites on the internet, and was catapulted into the mainstream this year when platform-posterboy Ninja streamed a game of Fortnite with Drake. With Fortnite and Drake joining forces, it was about as marketable as it gets in 2018.

Aravelle freely admitted she may not be playing with Drake any time soon, but the Manchester-born Twitch streamer has been slowly and steadily garnering a dedicated following since she began streaming in 2015, and is now an affiliate with almost two-thousand followers, a not inconsiderable number for a platform where many find it hard to get noticed at all. I sat down with her to find out more about her life as a Twitch streamer.

“I never planned to stream; I planned to do YouTube stuff – then I could do all the lovely editing out of the swearing and the fails and all that stuff, and I could really tailor what people saw of me.”

My conversation with Aravelle started on the same note that characterised most of the conversation. Aravelle was frank but humorously self-deprecating as she explained how she got into streaming.

“I did a few YouTube videos and my twitter followers and YouTube viewers were like, ‘why don’t you stream?’ This was about three years ago when Twitch wasn’t as popular as it is now.”

“The first time I tried it, I was so scared. I couldn’t pay attention to what I was playing; I lost every round because I was so aware that people could see me in real time, which was initially really off-putting.”

“Luckily, I built quite a good foundation of being able to talk total rubbish by having a really active twitter account!”

Despite her initial anxiety, Aravelle revealed that she quickly found that interacting with a live audience quickly became her favourite element of streaming:

“That’s my favourite thing about streaming. If no-one watched me, I’d probably still stream, but I’m very chat and viewer orientated. My community is, quite possibly, the nicest and most random community you’ll ever meet.”

“It’s nice for people to feel like they’re part of something; not like you’re just a viewer number. I’ve been into bigger streams and said hello and your comment just vanishes. In my streams, people can disappear for weeks on end and we’ll still remember what they were doing when they left.”

“I think a lot of people forget when they’re streaming, you’re actually talking to real people.”

The idea that her audience were more than just numbers was a recurring theme throughout our conversation, with Aravelle saying that she often liked to conceptualise her audience as if they were standing in the room with her – a feat that she jokingly acknowledged would be physically impossible.

She seemed, in some ways, quite surprised that so many people were willing to spend their free time watching her play video games, but was genuinely grateful to her viewers, saying that she often tried to find new ways to get and keep them involved in the stream: “I particularly like puzzle games and stuff like that where chat can get involved and help out. Usually because I’m splitting my attention between the game and chat, I get it all the time where I miss things and people will point it out.” 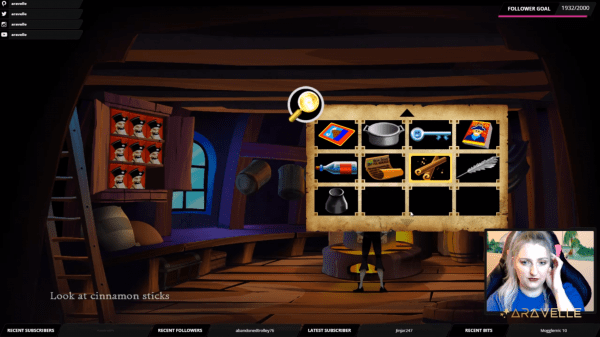 “In the puzzle games, it gives chat the opportunity to get involved; they choose what options I say to people, they choose which paths I take. They kind of run the choices I take; it’s kind of like a choose your own adventure stream, where they make the decisions and I tend to go with it.”

We then spoke about what appeared to be the central paradox of any Twitch streamer’s experience, which was the fear of losing that close connection to individual commenters in favour of a larger and more lucrative channel.

“It does [worry me] a little bit, because I know when I had 300 people in my stream for the best part of an hour, I couldn’t keep up. I became very conscious of the fact that I wasn’t given each viewer my undivided attention.”

“I think as long as it’s a reasonably slow progression, it’ll be manageable. If I became Ninja overnight, I’d probably freak out, but it’s been quite a slow growth over the last three years so I’ve been able to adapt.”

This wasn’t the first time Ninja – a figure now synonymous with Twitch as a platform – had been mentioned, and we chatted for a bit about his impact on the community, as well as his divisive decision not to stream with women, before Aravelle spoke about her experience as a woman on the platform in general.

“It’s not fun being a woman on the internet full stop.”

“You do tend to get tarred with the same brush as some other female streamers who use the platform to promote their cam sites, but there’s a lot of resentment from smaller male streamers as well, as if a woman is wearing something low cut and has 300 viewers, she’s taking their viewers.”

“There is quite a lot of misogyny in the games industry as is. I’ve been gaming for 32 years, so when people come to my stream and try to start quizzing me on gaming to make me prove I’m a gamer, it’s quite sad.”

“It’s bizarre. My first game console was the Pong, and I’m getting quizzed by eighteen, nineteen, twenty year old guys who only play Call of Duty but are still asking me to prove I’m a gamer.”

Although Aravelle said that her large social media following and on-the-ball moderators had meant she had rarely been targeted specifically, she went on to say: “I have seen [misogyny] aimed at a lot of other women I know on the internet, and I know a lot of people of people who play games online and keep a gender neutral profile on everything that’s public to avoid that sort of treatment.”

Nonetheless, she seemed determined to forge a way into the games industry, speaking positively about the present and future of her channel, although she seemed conflicted over whether she’d truly want streaming to be her sole source of income:

“I could never be one of those seven days a week streamers, but I think anybody who has been streaming for the same amount of time I have and says they don’t want to do it full time is a liar, because it’s so much fun, it opens so many doors, you play so many games and meet so many interesting people doing it. There’s always something new going on and its always really interesting.

“Streaming full time would be amazing but it might change the way I feel about gaming. Now it’s something I look forward to and it’s an escape and a way to hang out with my friends.”

Aravelle’s notion that Twitch streaming should be a source of enjoyment first and a job second was admirable, and something that I’d certainly noticed had been reflected in her streams, which were, in my experience, generally lively, energetic and good-humoured. 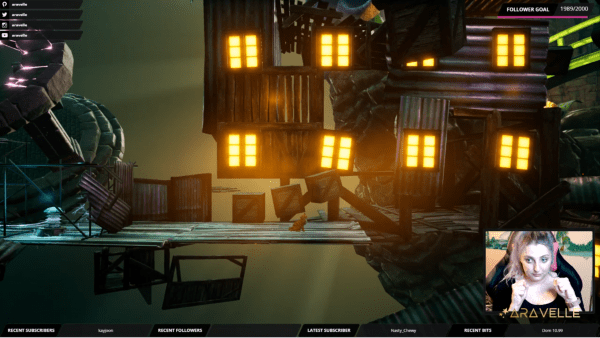 However, Aravelle mentioned that she had noticed that, since Twitch had really been legitimised as a mainstream source of gaming content over the last 18 or so months, creator’s attitudes towards the platform had changed.

“It’s become quite an entitled society as a result. When I started streaming back in 2015, the affiliate programme didn’t exist. You streamed for fun, unless you were a partner, and then you got paid. And the chances of getting made a partner back in 2015 were ridiculously slim.”

“Now, I tune into streams sometimes to check out new streamers and you’ll see people getting really grumpy and disheartened because they’ve got hardly anyone watching; you’ll see people streaming for a week and wanting to be an affiliate.”

“I’m working just as hard as other streamers to increase my audience, but it seems like a lot of people are taking it way too seriously.”

This, she reflected, was evident in many Twitch streams, who expected to generate views just by being there, rather than by generating entertaining content or by engaging actively with the people watching.

“I’ve been on so many streams where people have sub goals when they have 100 followers, and they’re trying to get 100 subs. Not everyone who watches you is going to give you money to watch you stream, and I think people have lost that sense.”

Built into this observation, and as can be inferred from the steadily increasing popularity of Aravelle’s burgeoning channel, was advice to those who want to run a successful stream. Money and followers – if that is what you want from Twitch – will only follow quality, and not vice versa.

One thing that struck me from watching Aravelle’s stream and from talking to her in person was that her stream was opposed to the household names of Ninja, Myth and others in that it was not marketed around – by her own admission – her ability at gaming. That’s not to say she wasn’t capable of playing the games she chose to stream, but, for the many of us to who God-tier Fortnite players remain utterly unapproachable, Aravelle represents a section of streaming that is based not around an exhibition of prowess, but around being approachable, relatable and personable.

This, along with her evident affection for her audience and her grounded approach to her channel, left me with the impression that whatever direction her channel takes in the future, it’ll be an enjoyable ride for all involved.