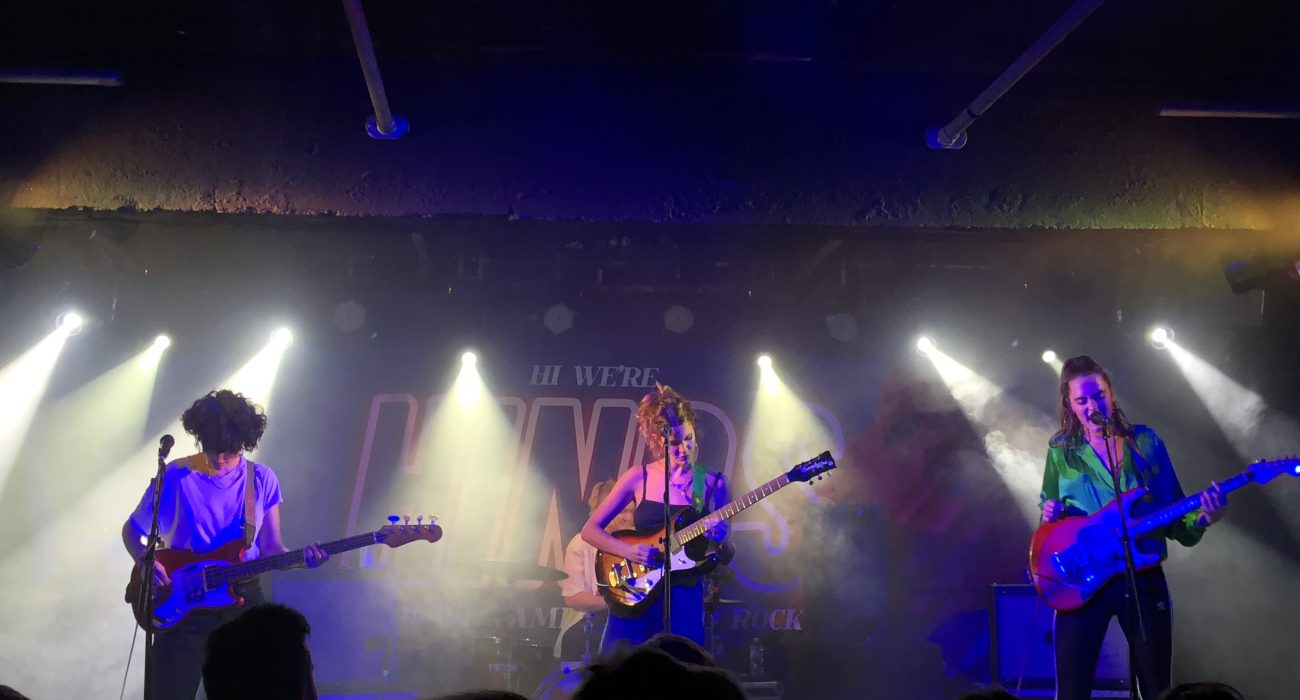 From the moment Hinds walked on stage at Academy 3, the audience knew they were in for a night of unadulterated fun. With the promise of “we’re here to rock your little bodies,” the band launched straight in with their loud fuzzy riffs and infectious energy. It was safe to say they were here to keep their word.

The all-girl four-piece, hailing from Madrid, are well known for their energetic, ramshackle gigs and manage to deliver a feeling of intimacy despite selling out venues of ever-increasing capacities. Frontwomen Carlotta Cosials and Ana Perotte bare it all through personal lyrics sung with raw emotion and passion. Nothing is held back; their lyrics are often brutally honest and not particularly subtle with “should I’ve known before you were also banging her” being yelled throughout song ‘Tester.’ The pair manage to seamlessly switch between screaming their vocals and moving softly through their lyrics, the rasp of Cosials’ voice adding to the unpolished feel of the band.

With Ade Martin on bass and Amber Grimbergen on drums completing the quartet, the chemistry they have with each other is undeniable. Never letting a drum beat or a lick of the guitar fall out of its messy yet coordinated place, the band are synchronised down to their every move.

Fan favourites from debut album Leave Me Alone, such as ‘Bamboo’ and ‘Garden’, seem to have their own mini routines, with Cosials, Perotte and Martin moving in unison. It’s a contrast to the band’s scruffier, DIY, surf rock sound but it conveys such exuberance and genuine joy to be performing live as friends. First and foremost, that’s what the group are, friends. The fun they have playing together is contagious and has the audience laughing along with their jokes as well as singing and dancing until the very end.

During ‘San Diego’, Cosials sheds her guitar and makes her way to the front of the crowd, shouting lyrics such as “stay close to me or know I’ll die” as she leans into the sea of singing faces below her. They follow this boost of intimacy with new single ‘British Minds’ which Martin jokes they wrote for us.

Despite the band’s constant enthusiasm and intensity, the crowd wasn’t always as responsive as the group deserved. During the first few songs, the high energy being thrown at us was not equally matched. Perotte answered this by declaring “it may be a Tuesday night but at least it’s not Monday” before asking the audience to dance with them for ‘Easy’. Following this, the crowd came alive, even maintaining their passion as both singers drawled through velvety sounding ‘Linda’ from second album I Don’t Run.

“Do any of you know The Clash?” is one phrase certain to ignite excitement in a room of already charged rock fans. Their rendition of ‘Spanish Bombs’ was authentically Hinds, bringing their own bouncing take to the punk classic which left fans shouting for more.

With the band dancing off stage to Monty Python’s ‘Always Look On The Bright Side Of Life’ it was hard to not feel a sense of delight at what I had just witnessed.

Feel-good, passionate and authentic, Hinds are queens of having a bloody good time. If anyone sees them live and doesn’t manage to have fun, it says a lot more about them than it does about the band.