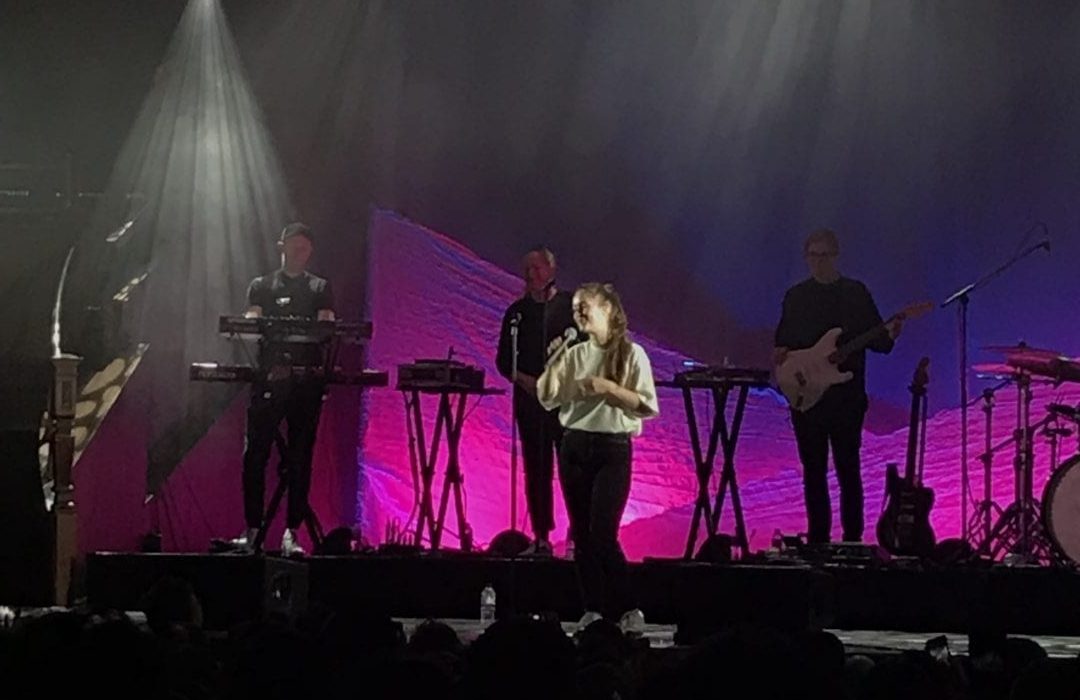 Pop sensation Sigrid kicks off her two night residency at Manchester’s Albert Hall in a way that demonstrates just why she has amassed legions of fans in such rapid succession. Bursting on to the stage to a packed out venue, the 22-year-old brings with her an indisputable sense of joy and infectious energy.

The Norwegian has had a meteoric rise in the last 12 months, managing to snatch the coveted BBC Music’s Sound of 2018 award earlier this year and embarking on a vast tour across Europe and the UK. Selling out not one, but two consecutive nights in Manchester is no mean feat for such a young artist, but Sigrid’s performance shows just why she is quickly becoming pop royalty.

Launching straight in to latest release ‘Sucker Punch’, a song with some of Sigrid’s best production value to date, borrowing small bits and pieces from this style of new wave pop music (à la Charli XCX) that is sweeping the scene at the moment.  In the midst of the fuzzy, distorted beats, Sigrid swaggers around stage with confidence that reflects that of a seasoned performer – and it is truly invigorating to watch.

The biggest moments of the night come courtesy of Sigrid’s quintessential Don’t Kill My Vibe EP, released last year. ‘Plot Twist’, a triumphant in-your-face anthem about realising your own self-worth sends audiences in to a collective riot, who recite the iconic chorus verbatim, arms waving and fingers pointing. ‘Don’t Kill My Vibe’ is received and performed with equally as much passion, with Sigrid’s vocals being drowned out by the sheer volume of her fans all chanting the lyrics back.

You’d be forgiven for thinking that this jubilant pop aesthetic might lack substance and weight, but Sigrid demonstrates a surprising level of depth and wise-beyond-her-years observations within her lyricisms. Hidden behind this brightness is a sense of vulnerability and refreshing honesty that marks Sigrid as a truly talented artist.  ‘Strangers’, which closes the night, is a bittersweet, pulsing pop song with the refrain, “I don’t want you, all you want is someone, going home together to forget we’re alone.”

The night carries some surprises as well and gives us a look in to the future of Sigrid. Unreleased song, ‘Credit’, from her upcoming album, is a darker, grittier style than anything released previously. ‘Go To War’ strays away from the sweet, bubblegum synths for a piano and drum focused single.

Credit is due to Sigrid’s powerhouse of a band, who maintain the same level of buzz as their front-woman throughout the entire set. Unlike other solo artists with their supporting band, the members here feel like truly integrated parts of the Sigrid movement. Particular praise is needed for the guitarist, who unleashes a phenomenal guitar solo during ‘Fake Friends’ to huge cheers from the crowd. Other standout musical moments go to Sigrid herself, for her flawless and hauntingly beautiful encore performance of ‘Focus’ – a moment where her vocal range and ability left me speechless.

Sigrid is an essential artist for this generation. Her ability to write perfectly constructed pop songs with lyrical poise and meaning whilst still ensuring a good time is had is a talent that audiences crave and rightfully deserve. If her consistently brilliant releases and joyous performances are anything to go by, then global domination is not far off.