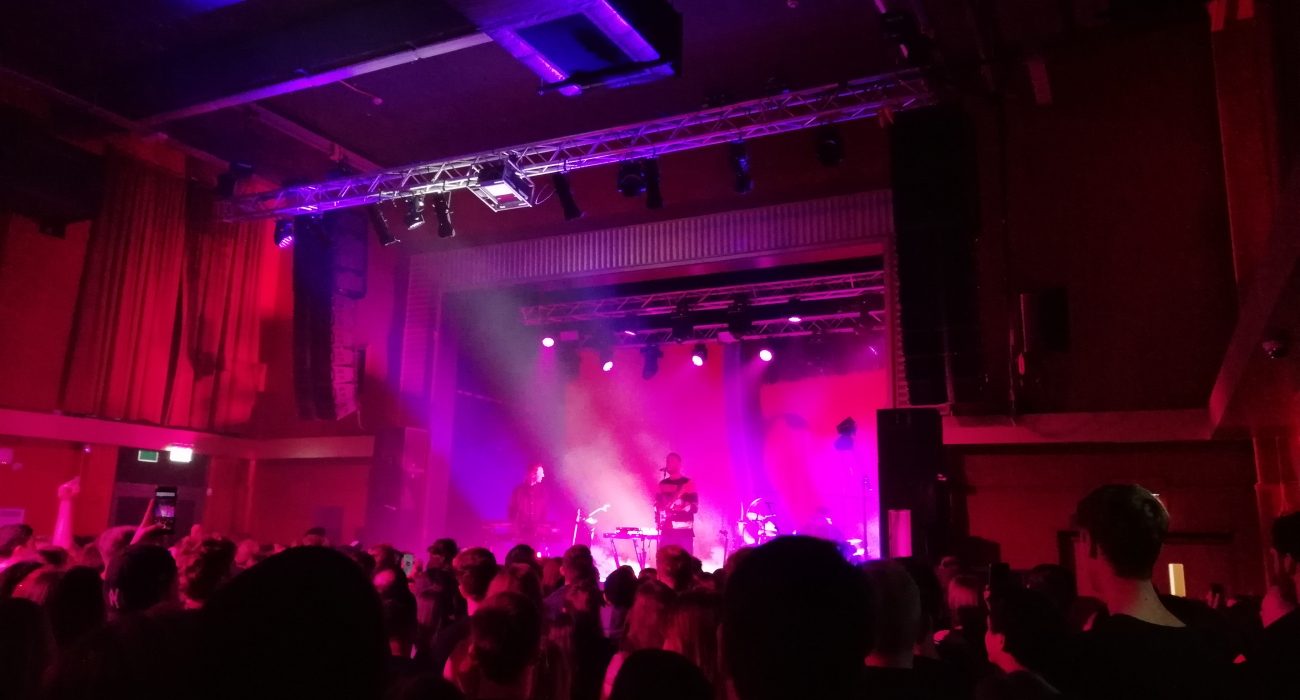 Electronic music duo HONNE emerge from their London studio after two years producing their Latest LP Love Me / Love Me Not, an offering that features a brighter sound of synth-pop with funk influences. Manchester’s Academy 2 was treated to one of only two UK dates on their current European tour. Andy Clutterbuck and James Hatcher were certainly keen to show off new material, with the entire second album dominating the setlist.

Opening track ‘Forget Me Not’ sent steady pulses through the audience setting the tranquil mood that HONNE are best known for. Leading on seamlessly was the more upbeat collaboration ‘Me & You’ where the stylings of Tom Misch can clearly be heard through the bass riff. Next came ‘Coastal Love’ and ‘Good together’ embraced by the audience. The two tracks highlight the more soulful style of the first album where Clutterbuck’s smooth vocals are best demonstrated.

BEKA deserves special mention for providing superb backing vocals. The choreographed dance between her and Clutterbuck’s voices adds another dimension to HONNE’s performance. Before her involvement in ‘Crying Over You’, the band admitted the song was struggling to gain traction, but its stirring delivery was a true showcase of her talents.

HONNE’s mastery of creating an evocative atmosphere is obvious in their live shows. This is appropriate considering their Japanese name translates to “true feelings”. It was a shame that the crowd at Manchester detracted from this element as audible chatter cut across otherwise delicate moments; many in attendance seemed more interested in photographing themselves or getting another drink instead of appreciating the music in front of them.

Unfortunately, fatigue impacted the setlist as the evening went on. Tracks merged into one an another as a similar synthetic melody left much more to be desired. Love Me / Love Me Not is all about its singles, and other, weaker tracks offer little diversity or exploration. Noticeably absent material from EP Gone Are The Days perhaps would have added change to make the gig more stimulating.

Energy in the room was lifted as HONNE announced they were to play some older songs. ‘All In The Value’ was the strongest track of the night with Hatcher’s guitar solo giving everyone shivers. Hit single ‘Someone That Loves You’ was met with enthusiasm and concluded the set with style. BEKA yet again establishing herself as a strong performer, filling Izzy Bizu’s shoes well.

The execution of ‘Warm On a Cold Night’ during the encore did not do the track justice. There was a stripped back feel to it with the bass guitar’s impact lost amongst the rest of the song. Clutterbuck then relentlessly asked the audience to repeat the chorus back to him. His categorical list of who was to sing next was tiresome: left side, right side, middle, anyone under five foot, boys, girls and just about anything else you can think of. One of HONNE’s best songs simply made into an annoyance.

That being said, ‘Day 1’ finished the night excellently. The best offering from the new album was uplifting as well as giving each band member a chance to improvise. HONNE’s stylistic and suave show is one worth watching despite its imperfections. As they continue to produce new music hopefully greater experimentation and variety will help their live shows to develop.