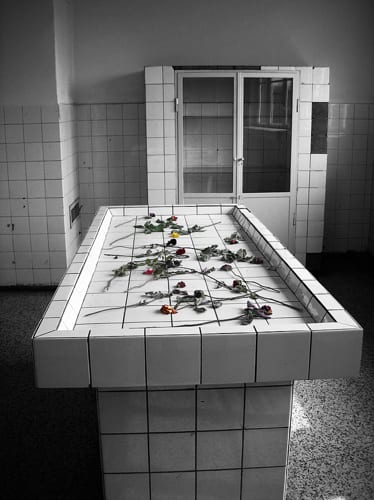 Review: The Possession of Hannah Grace

The Possession of Hannah Grace opens with a very familiar scene. The titular young girl, Hannah, is tied to the corners of her bedpost. Two priests, one old and one young, stand at the girl’s bedside with her father, reciting biblical phrases meant to expel the evil which inhabits this daughter of God. The scene culminates in the father being forced to suffocate the demon and, in turn his daughter, with a pillow when it proves too malevolent. The body of the possessed appears dead.

But we, as an audience, know better.

Flash forward a few months and we meet Megan Reed. She’s a former Police Officer who left the force after watching her partner get shot. When we’re introduced, she’s doing what everyone in that situation would do, and being interviewed for her new job on the graveyard shift at a morgue. At this point the film also gives some early insight into Megan’s mental health due to recovering alcoholism, PTSD, and recent break-up from her still-police boyfriend.

When those two elements of the film’s introduction are paired together in such a way, it’s almost easy to spot the central flaw of the movie. It can’t seem to decide whether it wants to be a supernatural horror with fear routed in possession, or a psychological one where we don’t know if what we’re seeing is real or in the head of a mentally unstable protagonist.

Of course, Hannah’s recently ‘dead’ corpse arrives at Megan’s door and she’s given the task of examining her. Through the course of the night, Megan begins to realise this is no ordinary corpse. It breathes for one thing, and seems to be regenerating its many brutal injuries and coming back.

However, the film condescendingly plays a lot of these events as if the audience doesn’t already know they’re happening. When Megan tells her friend about the breathing corpse, it is explained with the simple biological fact that dead bodies can exhale under certain circumstances. But this bluff doesn’t work when the very first scene we saw informed us that there is a possession going on, so we know this is what’s causing it, somewhat reducing its horrific impact. This only serves to show that the film is not really as smart as it thinks, and further demonstrates its inability to pick a tone.

Shay Mitchell does a solid job as Megan, along with most of the cast who all fit their roles well. The telekinetic death scenes of Hannah murdering side characters look decent, but are too repetitive to be interesting. And, the film is very much filled with nods to classic horror films like The Shining, The Exorcist, and A Nightmare on Elm Street. They, thankfully, aren’t too repetitive. But, when placed in a film as dull as this, only serve to make you think of better things you could be watching instead.