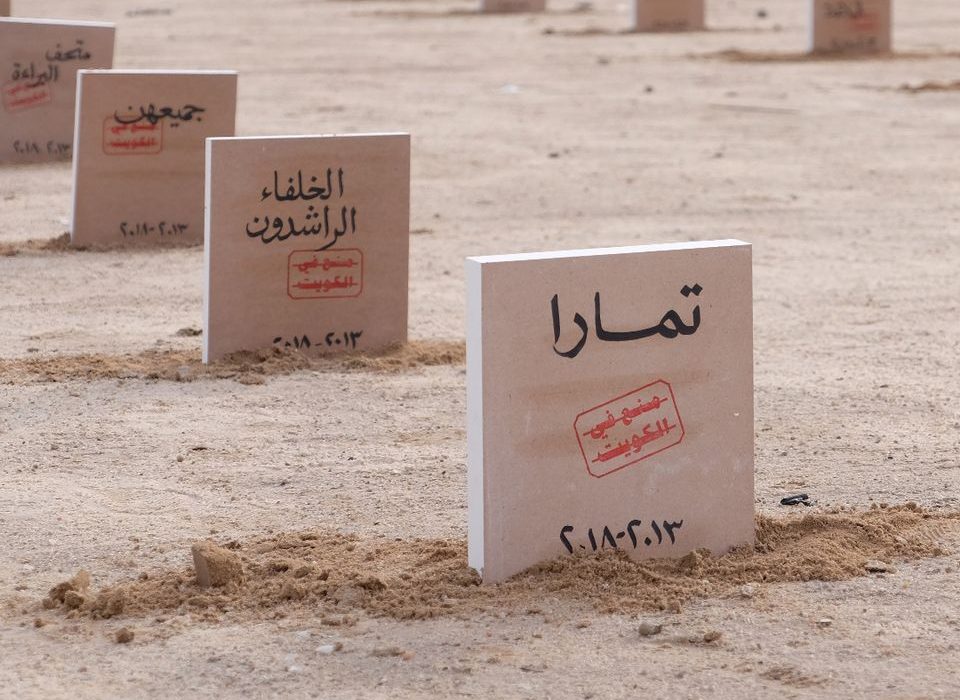 Photo: Mohammad Sharaf, The Cemetery of Banned Books (2018) in Kuwait.

The Cemetery of banned Books: Censorship in Kuwait

Earlier this year a list of banned books in Kuwait surfaced on Twitter. By itself, it seemed hardly noteworthy. After all, most governments have, at the very least, attempted to outlaw certain books before. D.H. Lawrence’s Lady Chatterley’s Lover, Roald Dahl’s The Witches, and Alan Ginsberg’s Howl all spring to mind. What was different about this list on Twitter, however, wasn’t that the Kuwaiti government had decided to ban books, but the sheer number of books they had deemed dangerous to their society.

In August 2018, an official notice from the government revealed that since 2013, the government has banned over 4,300 books. These range through all genres, from encyclopaedias that feature images of Michelangelo’s David (sans fig leaf), to Orwell, and even Ariel from the Disney version of the fairytale. Kuwaiti authors featured on the list too. Mai al-Nakib, who won the 2014 Edinburgh International Book Festival’s First Book Award with her novel The Hidden Light of Objects, was one of thousands banned. The sheer breadth and scale of the Kuwaiti government’s programme to cull and censor is breathtaking and worrying.

There is something incredibly sinister about governments who aim to control the flow of information and knowledge within their borders. More insidious are the reasons with which they justify their actions. The promise to protect and preserve the interests of their people can so easily be taken to extremes and whether it’s intentional or not, it’s dangerous. What are the consequences of governments that no longer believe in their peoples’ ability to discern what information is valuable? More importantly, what are the consequences of a government that believes that it alone can deem what is too inflammatory, incendiary, and a threat to public peace? These are questions that we should be asking ourselves, not just in relation to Kuwait, but in relation to our understanding of our own sense of freedom.

Ironically, in most cases, the act of banning a book increases public interest in the book rather than discouraging it. Ginsberg’s public readings of Howl became infamous in San Francisco, and arguably generated more publicity for his writing than if the book had simply passed through publishers and onto bookshelves unheeded.

When Penguin won their obscenity trial against the British government in 1960 over the right to publish Lady Chatterly’s Lover, they promptly went onto sell over three million copies in the UK.

In Kuwait, there are no open-secret poetry readings, nor are there national trials fighting for the freedom of information and speech. Instead, there is — or rather, there was — a cemetery.

For four hours on the 22nd of November 2018, The Cemetery of Banned Books, conceptualised and installed by Kuwaiti-born artist Mohammad Sharaf, stood in ominous solidarity along the peripheries of Kuwait’s Annual Book Fair before it was taken down by authorities. The irony of this, I’m sure, is not lost on anyone.

The piece consisted of 200 headstones dedicated to just some of the titles that made it onto the government’s list of banned books. Looking at the photos that were taken before the installation was removed is haunting.

Kuwait has always had a reputation of being a hub of independent thought and culture, which is something that the current Emir, Sheikh Sabah al-Ahmad al-Sabah, has been keen to foster. But how can this image hold up when such censorship is so widespread?

Sharaf’s cemetery is not the only act of protest against Kuwait’s ongoing regime against literature. Public protest, whilst allowed in Kuwait, is heavily regulated. Writing in The Art Newspaper, Sharaf noted that: “When I moved back to Kuwait… I noticed that activism around the subject was inconsistent—it kept coming and going from public platforms. This pushed me to try to think of something more impactful that would reach the general public and not only the small group of people invested in the subject.”

In recent years there has been a shift in understanding about how we approach difficult topics, and how we talk to each other about things we might completely disagree with. More and more it seems, people are becoming less willing to discuss tough and sometimes controversial topics. How can you have a dialogue with someone who is not operating in good faith? Someone who doesn’t want to add to the wider conversations but rather aims to obscure them? I don’t have the answer, but I’m worried about what this trend in politics and public debate will lead to. I hope that it won’t lead to the kind of censorship that the Kuwaiti government is currently engaging in.