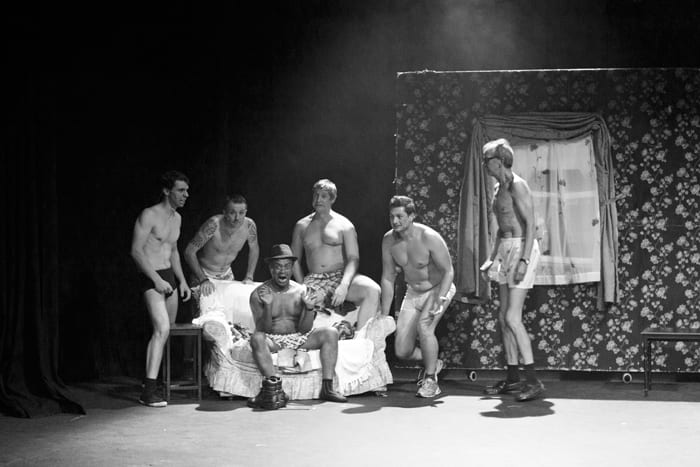 The Full Monty is undeniably one of the most iconic films of the nineties. Performed at The Manchester Opera House as part of the UK tour, Simon Beaufoy’s adaptation of the film to the stage left much of the film’s wit and poignancy lost in translation.

Set in a time of austerity and unemployment, the story follows six unemployed Sheffield steelworkers that, in their desperation, form a male stripper group to generate some quick cash. Inspired by the Chippendales performance at their local working men’s club, the ‘The Bums of Steel’ attempt to nakedly triumph in the face of adversity.

Gaz (Gary Lucy), the pioneer of this grand plan, and his mate Dave (Kai Owen) begin recruiting their fellow job club members to make up their Chippendale inspired troupe. What followed was a hilarious and entertaining sequence of auditions. These introduced the Northern-soul loving Hoarse, charismatically played by Louis Emerick and the well-endowed Guy the Plasterer who left nothing to the imagination as the curtain closed on the Act One.

Beneath all this, Simon Beaufoy’s script was unsurprisingly imitative of the film. Much of the tongue-in-cheek humour remained and the famous one-liners never failed to elicit laughter. There was an obvious desire to stay true to the film and ensure that it encompassed everything that captured the nation’s hearts the first-time round.

However, some of the issues needed to be negotiated slightly more tentatively. The script was unnecessarily misogynistic at times and dealt with the conversations around homosexuality far too brashly. I understand that Beaufoy wanted to maintain loyalty to the original story. However, this also maintained some dated and sometimes uncomfortable dialogue. In fairness, the play does tackle subjects beyond the cheap thrill of the strip tease, dealing with unemployment, poverty, sexuality, and body image – but I feel suffered these suffered at the expense of the cheaper gags.

The production was visually gratifying. The basis of the set depicted the inside of a steel factory, with the ability to be masterfully reconfigured into both the ‘Job’s Club’ and ‘Conservative Club.’ The various levels were utilised well, the transitions between scenes seamless and incorporated into the narration. The blaring, iconic soundtrack including the likes of Bowie and Hot Chocolate underscored the production and fed into the energetic and edgy tone of the show.

The performances were engaging and well-rehearsed, yet overall lacked energy and momentum. Gary Lucy’s portrayal of Gaz was slightly underwhelming. Despite gaining endless woos from the hen parties in the audience with his talent for undressing, his performance was unfortunately undermined by his weakness as the lead. Often swallowing his words, dipping in and out of accents and gabbling through his lines, it left many potentially moving moments lacking.

Lucy was strongest when surrounded by his fellow cast members. The chemistry between produced energetic moments of pure comedy genius. Andrew Dunn’s Gerald and Kai Owen’s Dave both deserve a mention, their portrayals cleverly balanced the comedy and tragedy that is bound within the lives of these working men.

The show did not fail in producing utter hysteria and excitement in the audience, with most of them standing at the end of the boys’ final strip tease. It must be said though, that this was the most exciting part; a shame that it didn’t go on any longer. Importantly for me, this show exposed the problems that we face with the sustainability and viability of theatre in our current cultural landscape.

The show is a play for the film fans, imitative of the nineties smash-hit and no doubt a crowd-pleaser. Yet, I cannot help but think that much of the show’s success is because we get to see Danny Pennant from Eastenders get his kit off: it sells tickets, gets bums on seats and only really leaves us wanting to see Gaz’s Full Monty.