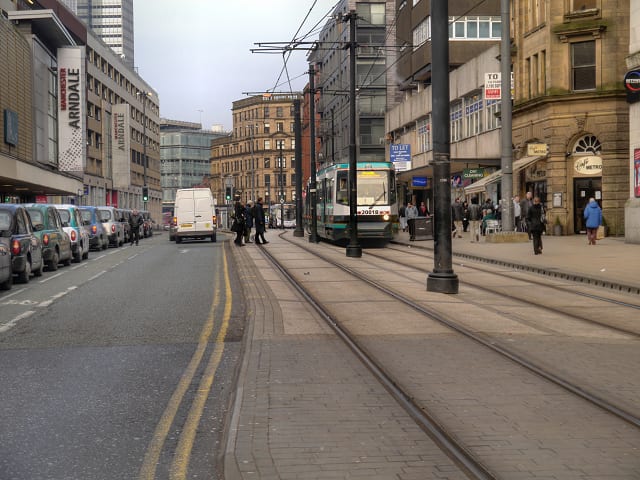 Two people were stabbed in he city centre in separate attacks on February 24th.

The attacks on two male victims were non-fatal and are not believed to be connected, despite occurring just two hours apart.

At 7:30pm, a man in his forties was attacked with a bottle outside Morrisons at Piccadilly Gardens. He was stabbed with the bottle in his back and his head.

The victim was taken to hospital with injuries that are not life-threatening, and has since been discharged.

A 23-year-old man has been arrested on suspicion of Section 18 assault.

The second stabbing took place 300 metres away at 9:56pm outside a Co-op store on High Street, following an altercation involving a woman.

The victim, a male in his 20s, exited the store to find the woman he was with surrounded by three ‘white men’. When he went to join her there was an ‘altercation’, Greater Manchester Police has said.

The victim was knifed twice by the gang and was taken to hospital in serious condition. The men also took the victim’s mobile phone after attacking him.

The man has now been discharged and is recovering at home.

No one is known to have been arrested for the incident on High Street, with investigations for both the stabbings now underway.

To aid in GMP’s investigation of the incident, council officials have been trawling through CCTV footage of the area from the night.

Pat Karney, Manchester City Council’s city centre councillor, said: “We don’t want any sort of reputation for knife assaults in Manchester. You can see in London what that leads to. That’s why we’re taking this very, very seriously.

“We will be asking Co-op and Morrisons to provide any additional CCTV footage they might have. The men responsible for the Co-op attack are complete thugs [and] cowards.”

GMP first looked into whether the two incidents were linked, but has since cast its doubts on this being the case.

City of Manchester Superintendent Chris Hill stated: “We have been working round the clock to piece together the circumstances surrounding these incidents which we now believe to be isolated and unconnected.

“I would urge anyone with any information or footage of either incident to get in touch with us as soon as possible.”

Police patrolling has been increased in the wake of Sunday night’s events.