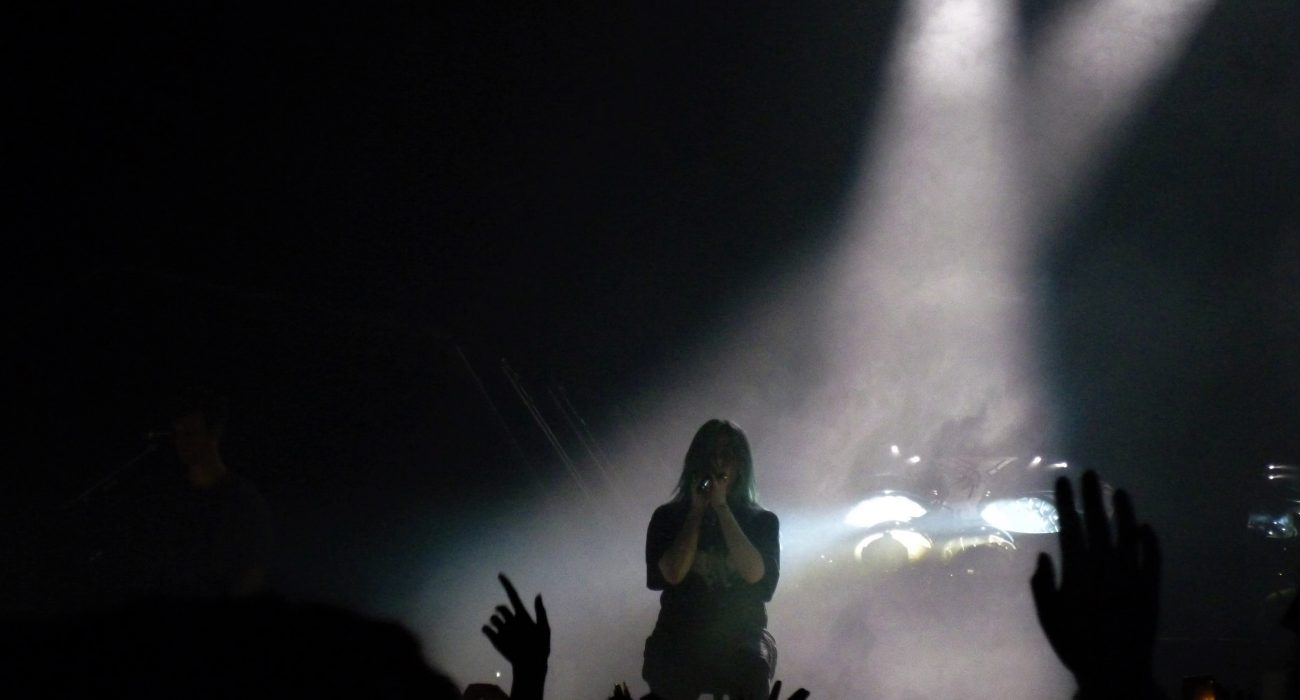 To describe the crowd as excited would be an understatement. The thundering sound of two thousand teens, screaming in anticipation of Billie Eilish’s arrival, was quite simply overwhelming and overpowering. Any view of the stage was obstructed by an endless sea of mobile phones, poised at the ready. If the deafening sound in the Manchester Academy wasn’t clear enough, blue lights turning red signalled Eilish’s entrance, along with the melodic start of ‘My Boy’. Singing along, the crowd matched the 17-year-old songstress word for word as she made her feelings on double standards and dishonest boys clear.

With over one billion streams worldwide, Billie Eilish offers a fresh take on what it means to be a young pop star. Her sombre, twisted tunes reflect the anxieties, vulnerability, hurt, and hope of a generation, putting into words the feelings of teens today. Eilish wears baggy clothes which she could have stolen from her brother, her long hair dyed silver and gothic jewellery round her neck – nothing like the pop princess stereotype. She is as she is, and her fans love it, helping her sell-out headline tours in minutes.

While Eilish writes in a way often left up to interpretation, she certainly doesn’t shy away from tough topics, aware of the influence her words have. Throughout ‘Idontwannabeyouanymore’, the crowd were shouting “If teardrops could be bottled / There’d be swimming pools filled by models” back at her, adding strength and validity to her social commentary, twin voices recognising the sadness of having self-worth based on looks.

Her melancholic chart-topper ‘Lovely’ (with Khalid) was the next big crowd pleaser. The track, which is about being trapped in a depressed state, has received over 170 million streams and featured on the soundtrack for the Netflix drama 13 Reasons Why, alongside the next song ‘Bored’. Delivered beautifully, the lyrics of this under-rated gem rang with poignancy, describing a toxic relationship — “I don’t want any settled scores / I just want you to set me free… Can’t you see that I’m getting bored? / Giving you every piece of me.”

The subsequent songs, ‘Bitches Broken Hearts’, ‘Six Feet Under’, and ‘Watch’ ‘& Burn’, all followed a theme of unrequited love. Struggling to recover from a heartbreak, and missing her ex even though they were no good together, Eilish sang “I can’t help but wonder / If our grave was watered by the rain / Could roses bloom / Again?”

Unable to exercise total control over her personal life, ‘Watch’ ‘& Burn’ – two versions of the same song — sees Eilish creatively take charge. The second imagining features rapper Vince Staples and offered more kick, with Eilish spitting out “Go ahead and watch my heart burn / With the fire that you started in me / But I’ll never let you back to put it out.” Her venomous passion grew stronger as she belted out ‘You Should See Me In A Crown’, the lead single off her debut album When We All Fall Asleep, Where Do We Go?, with her voice then turning sinister. ‘Hostage’ started out slow, Eilish whispering about how “nothing hurts… When you’re with me and we’re alone,” before the lyrics turned darker and obsessive — a tone which continued for ‘Bury A Friend’ and ‘Bellyache’.

Taking a break from the darker side of her music, Eilish slowed the pace again for ‘When The Party’s Over’, asking her fans to take a moment. “Let’s be here, right now, together”. Words met with a sea of hands making hearts as she began ‘Ocean Eyes’. The room went quiet as Billie whispered, “I’ve been watching you / For some time / Can’t stop staring / At those oceans eyes.” After finishing the hauntingly beautiful track which landed her a record deal, Eilish took a moment to thank her parents and her producer/bandmate and brother Finneas, before one last energetic song ‘Copycat’, through which she reminded her fans to be themselves.

For a girl so young, Billie Eilish sure knew how to whip up a frenzy on stage, but as I watched the queues of teens leaving the venue, it felt important to recognise her status, not just as a musician, but as an alternative role model reaching out to the masses.