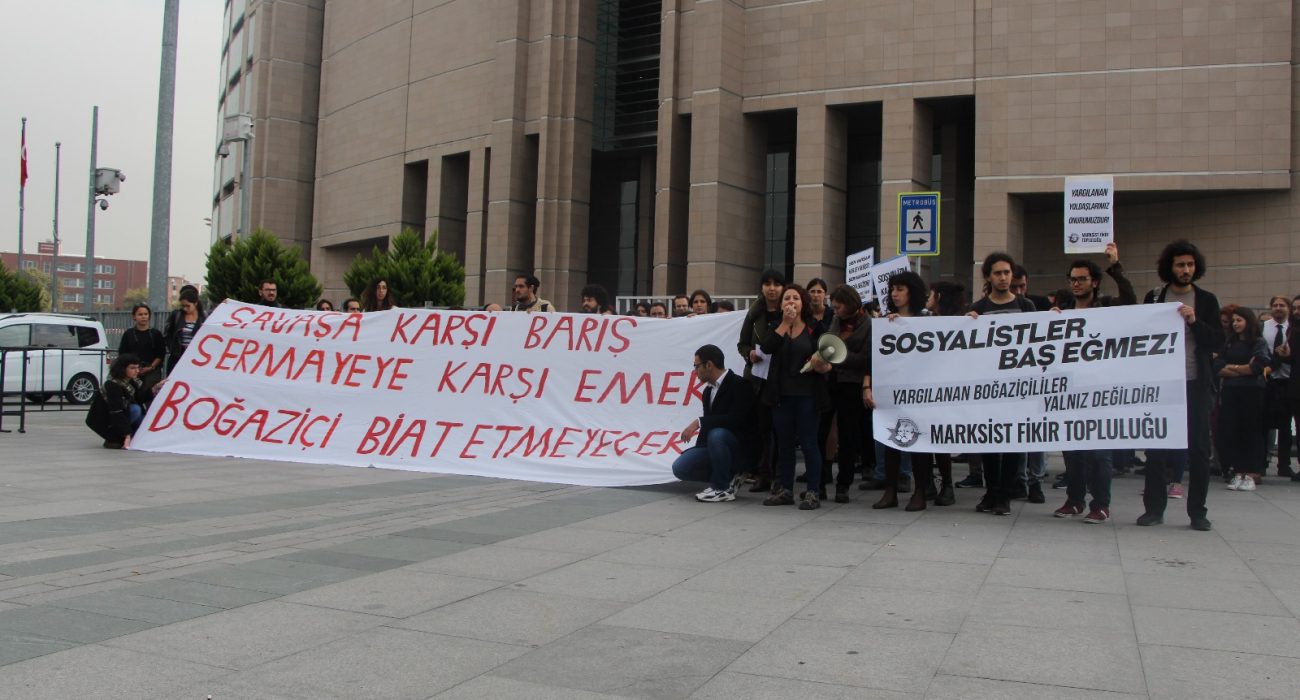 Students protest outside the Istanbul Palace of Justice at the second hearing of the trial. Photo: Ulla Karhumäki.

Students in Turkey faced torture whilst being held by authorities following an anti-war demonstration, according to a University of Manchester academic.

A report by Ulla Karhumäki – a PhD student in mathematical logic – details how a group of 32 Turkish undergraduate students were arrested on ‘terrorism propaganda’ charges, with some having further charges placed upon them. A trial is now underway.

Karhumäki attended the second hearing of the trial, where 31 of the 32 students – all of whom were aged between 19 and 26 – had their ban on leaving Turkey lifted. In her report, which is “based on the conversations [Karhumäki] had with the students, or with [their] friends and families”, she writes in detail the procedure and outcome of the hearing.

The report states that the students were arrested for attending an anti-war protest near the Boğaziçi University library following Turkish forces’ capture of the city of Afrin, Syria. Some of the accused claim to be there “by chance” according to the report.

In her report, Karhumäki claims that at least two of the students from Boğaziçi University faced beatings during the arrest. Before the trial, students claim to have had laptops confiscated, hampering their efforts to study for their course. Whilst being held by Turkish authorities, one student claims that at least two student detainees were beaten, and at least two were forced to undress completely. Whilst in prison, another claims that up to 43 people were held in a room designed for seven.

The next hearing of these students will take place on 19th March, exactly one year on from the demonstration, when the accused should face their final sentencing.

Currently, Turkey is ruled by President Recep Tayyip Erdoğan, whose stint in leadership has been tarnished by claims that freedom of speech and press freedoms have been suppressed since taking office in 2014. Recently, opposition news site Ahval reported that publishers were refusing to produce certain books due to fears they could be arrested.

In January 2019, Erdoğan rejected US National Security Adviser John Bolton’s suggestion that Turkey should protect Kurdish fighters in Syria, describing the American’s statement as “unacceptable”. Turkey regards the Kurdish People’s Protection Units (YPG), who are fighting in Syria, as a terrorist organisation.