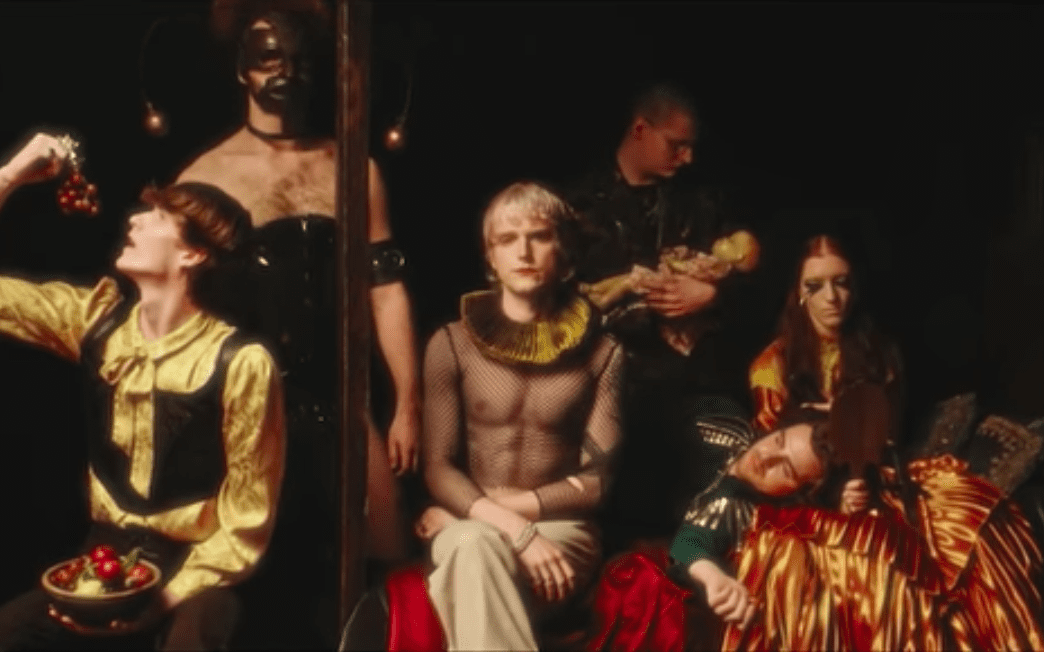 Sundara Karma – arguably the saviours of the mid-10s indie music scene – have always posited themselves as something much more than just a band. Their EPs, whilst dripping in danceability, had a prolific, spiritual nature to them, and their ground breaking 2017 debut Youth Is Only Ever Fun In Retrospect was equally as transcendent. But there was always a persistent intelligence and depth to their work which marked them out as something special. Now two years on, the foursome are back with their sophomore project, Ulfilas’ Alphabet, a record of equal intrigue and spectacle.

The name of the LP itself references Ulfilas, a man responsible for the Gothic Alphabet, the format in which the Bible was translated in to for people to read and understand. Throughout the album, frontman Oscar Pollock’s insightful lyricisms harken back to the concept of a constructed language – the power of words and the meanings ascribed to them form an intense focal point. Ulfilas’ Alphabet is an expressive exploration of communication, sonically and lyrically.

There’s a genre-hopping quality present throughout the record that lends itself well to this lofty concept of language creation. Whilst Youth… was a bona fide collection of classic indie tracks, the instrumentals on Ulfilas’ Alphabet dip and dive in to a much broader soundscape. There’s flashes of classic 70s-esque disco on songs like ‘A Song For My Future Self’ or ‘One Last Night On This Earth’. Elsewhere on ‘Ulfilas’ Alphabet’ and ‘Little Smart Houses’, Pollock seemingly channels some David Bowie (à la ‘Let’s Dance’ or ‘Ashes to Ashes’) to an eerily good standard. Usually one would anticipate some of this sound experimentation to go awry, but here, Sundara Karma manage to pull off this versatility not only with apparent ease, but with perfect execution.

Ever the innovators, Sundara Karma also manage to expand their musical lexicon to bold new heights. The surprisingly jittery, techno-infused ‘Higher States’ is a sonic deviation from tradition, but still retains the wisdom and idiosyncratic atmosphere of their older discography. Album closer ‘Home (There Was Never Any Reason To Feel So Alone)’ carries the same anthemic feel of Youth’s ‘Happy Family’, reaching a powerful and emotive climax, one that will undoubtedly be sung back to the band with unquestionable passion at their upcoming live performances.

Lyrically, Ulfilas’ Alphabet is Sundara Karma working at an even more profound state than before; each track feels more like a poem than a song, set against the backdrop of infectiously catchy instrumentals. ‘Symbols of Joy & Eternity’ explores the incessant pursuit of success in a competitive and jaded society, with lashings of spiritual imagery sprinkled throughout. The sombre ‘Ulfilas’ Alphabet’ conveys a desperation to be understood in an era of communicative uncertainty and ambiguity – “It’s crazy what it takes to make amends”, laments Pollock as the track concludes.

Embedded within the soaring melodies and crescendos, Ulfilas’ Alphabet seems to reference a dystopian existence that we are not entirely too far off from. A combination of futuristic synths and distorted guitar riffs across the track list help elevate this concept whilst keeping the album grounded in the present. Initially optimistic in tone, by the time ‘Sweet Intentions’ is reached, there is a growing sense of futility and displacement, a tangible disdain for both society and the self. “You’re both the sinner and the saint, the wolf, the man the things you hate”, “Save yourself, confront the darkness” and “You ask to speak with your eyes ‘cause they’re safer than words” perpetuate this idea and give listeners something meaningful to take away with them.

Sundara Karma have managed to cement themselves as a formidable, ethereal entity with this release. It’s a perfect summary of everything going on at the moment – ineffective communication, a sense of disillusionment and feelings of existentialism. All of this is layered in sounds to throw you off the seriousness. But in some ways it’s liberating. We need an emotive outlet for these emotions. Ulfilas’ Alphabet is a seminal piece of work that dabbles in playfulness and poise and it’s exactly what we need.