Football Manager has always been a series that demands more of your time than the ordinary game. With its ability to live off football’s perpetually self-producing narrative, its extraordinary depth, and its meticulous stat-tracking, its an experience that often ends up taking 400 hours rather than 40 for many players.

However, the further you go in the game, the less and less predictable it becomes, moving away from Sports Interactive’s tightly curated, ruthlessly accurate starting database into the swampier waters of a fully generated footballing universe. Today, I look at how it copes with this transition.

Of course, this is somewhat a fated exercise in new games journalism. To say that my save is representative of all saves is probably untrue, but, considering I used fairly typical starting settings and was not in a position to influence the game’s upper echelons until at least 2027, it seems a fair sample.

My career started very innocuously with Harrogate Town, with who I achieved precisely nothing for two and a half years before I upped sticks and moved, quite undeservingly, up a division to manage League 2 strugglers Stevenage. It was there my career quickly took flight. Having found my feet tactically, I achieved two promotions in four years.

Having established a tenuous foothold in the Championship with Stevenage, Leeds came calling, and I guided them to the Championship title on the first time of asking. A successful but sometimes frustrating spell in the premier league eventually culminated in Manchester City hiring me, and, a mere thirteen seasons and 570 hours after starting with Harrogate Town, I was lifting the Premier League trophy, FA Cup and Champions League treble.

One enduring thing I noticed throughout this time was how competitive the game remained. In previous installments, I’ve observed a distinct lack of ambition even from the world’s biggest clubs, but this is not the case in FM2019.

Indeed, regardless of whether I was struggling at the bottom of the Vanarama National or flying high at the top of the Premier League, FM always kept me on my toes, with tactics needing frequent tweaking to prevent them from coming stale, and other teams constantly upping the ante in order to compete. Even at City, it never got too easy.

However, it was a shame to see that this competitiveness rarely extended to lower league teams, who rarely got much further than a league or two above where they start. After almost 15 years, the make-up and mini-league structure of the Premier League was still very much intact, which is either an accurate simulation of how the money now in the league will affect the future, or a gross disservice to the ambition in the football league. Clubs seem to get stuck in endless yo-yo cycles of promotion and relegation, while the also-rans remain in situ for long periods.

The player base itself becomes much less interesting as the game progresses. Over time, I’ve noticed that regens (more accurately newgens) typically tend to be quite boilerplate stats-wise, with few of the weird and wonderful Fellainis or Thomas Mullers around to provide something different. An absolute abundance of deep-lying playmakers is a particular frustration when trying to build a balanced squad.

Indeed, there are several player roles – such as the box-to-box midfielder, ball-winning midfielder, complete wing-back and false 9 – that die out almost completely, which is a shame considering the variety present in modern football. It should be noted, however, that this is less the case than in FM18, which was even more extreme in this regard.

Players also tend to be shorter and more well-rounded. Whilst this campaign against target-men frustrated me at first, it had an interesting effect on the meta. Because most squads were composed of relatively short, fast players, I found that I could gain a sizeable advantage at set-pieces by signing bigger, stronger players, or by floating crosses to an aerially adept striker. Additionally, the relative paucity of defensive midfielders, especially those adept at pressing roles, meant that deploying a pressing defensive mid gave me the upper-hand in most midfield battles. Elsewhere, the lack of good attacking full-backs with strong crossing and/or dribbling stats meant that I didn’t need to guard against overlaps so much and could, accordingly, deploy more attack-minded wingers. 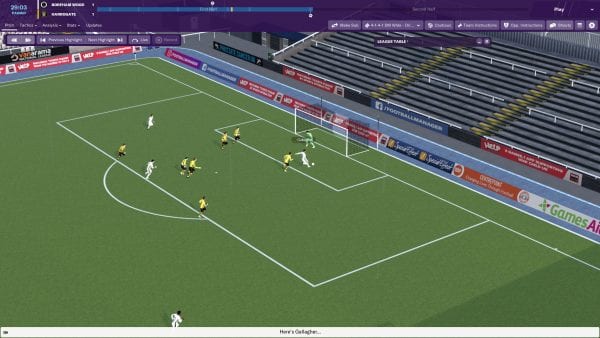 Perhaps even more unlike real football, there is an absolute abundance of good strikers compared to most other positions. This has the effect of making strikers relatively cheap, whilst good goalkeepers and defenders became exorbitantly expensive.

In some ways, I consider these things detrimental to the late-game, but on the other hand, it created an effect where, as a manager, I had to adjust to the changing trends of the market and make tactical tweaks to deal with quicker, smaller, but more technically able players. Seeing the effects of this in a simulation was certainly interesting, even if it became exploitable. Even without giving specifics, it was very satisfying to analyse changing trends in global football and have to adjust accordingly.

Sports Interactive, however, have failed once again in making their regens resemble anything close to human beings, let alone athletes at peak physical condition. A minor and superficial criticism this may be, but it can be irksome when your squad is filled with guys who look like they’re wearing someone else’s face.

A lot of what I said about FM after 40 hours would still stand now, perhaps even more so. In particular, press conferences have become a real bain of my existence, whilst player interaction seems no less shallow for more play time. The same can be said for player personalities, which remain woefully underdeveloped in comparison with tactics.

Nonetheless, the fact that FM has remained so very durable speaks for itself. If any game can encourage you to sink a statistically significant portion of your life into it, that’s probably not a bad thing (well, at least not for Sports Interactive – my personal life is another matter entirely), and Football Manager 2019 remains a master of addictiveness.

There’s plenty wrong with me: The Arkham saga retrospective

A love letter to Rocksteady and the Batman games they made

In the wake of the newest Call of Duty game, the intentions of the ‘keep politics out of video games’ crowd remain as clear as ever