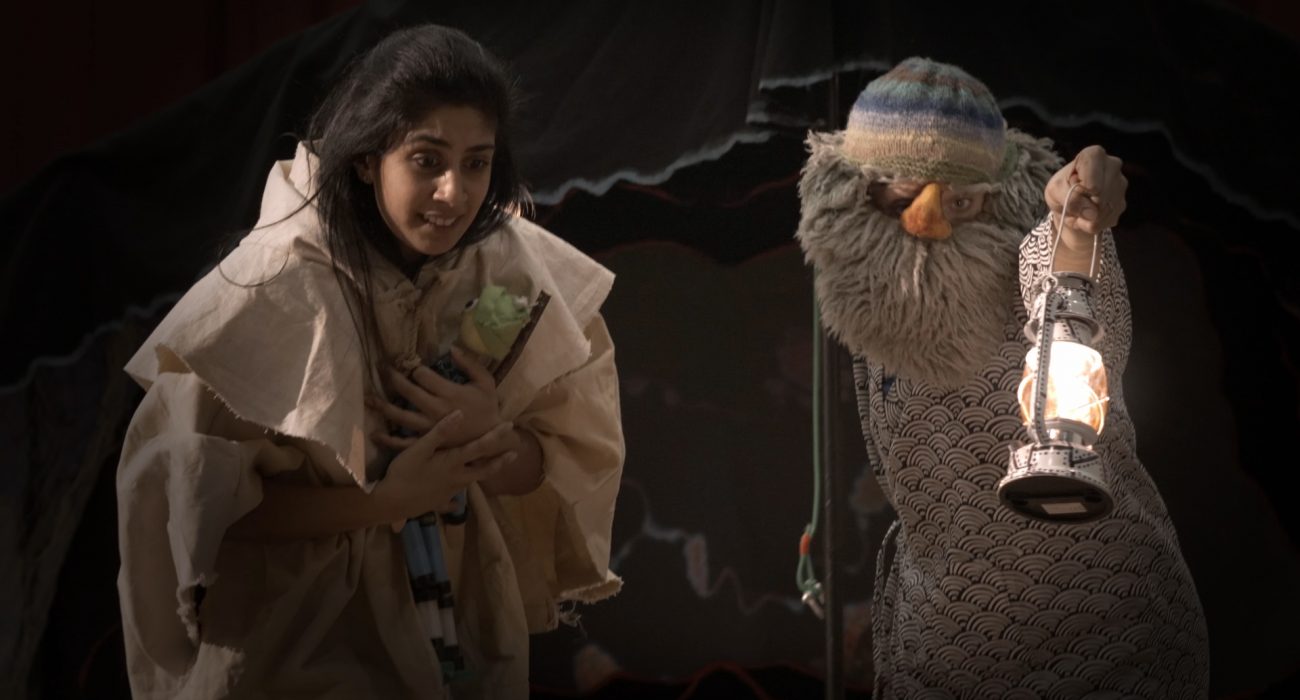 Forest Tribe Dance Theatre’s  Alluriat transformed a rather ordinary room in the Manchester Central Library into an underwater adventure. Intended as an immersive and interactive performance for 7-11 year olds, it certainly had me enticed too!

The set design by David Freedman was interesting and made up of  different materials and textures, with the central element of a tent used to conceal and reveal props masterfully by performers Purvi Parmar and Jennifer Kay. Alluriat is also inspired by David Freedman’s poem of the same name.

The performance was completely non-verbal,  Parmar and Kay were assisted by music, puppetry and their own movements to create the story. They were both impressive storytellers and were able to demonstrate clear emotions of love, loss and fear as they were consumed by waves and one character tried to search for the other. The abstract nature of the story focused more on evoking emotions that each person could interpret as their own version of a story, this was very successful and beautiful to experience.

The interaction and involvement of the children in the audience was balanced well and cleverly tactile, with pieces of fabric representing the sea and breaking of the fourth wall by Parma for the children to help her pass thread through a sail. My only criticism here would be that interaction was too focused on the front row and only once were the children at the back directly engaged, the show certainly lends itself to more involved interaction with all of the young audience.

Despite this, the most delightful aspect of this performance was watching the children react to the performance. Their willingness to wave in response to the puppets  and to volunteer to become the face of the fish when called upon was nothing short of heart warming. Furthermore, their reactions really demonstrated the success of particular aspects of the performance.

The children responded to subtle facial expressions just as readily as the exaggerated comedic moments. They were also tangibly intrigued by the contemporary choreography by Debbie Bandara. The puppets and ‘holographic’ images of sea creatures projected on the tent were undoubtedly the biggest hit. My personal favourite of the puppets was a hermit crab, ingeniously created so that gloves could be used to operate the claws and legs in impressively life like movement.

This was a well-intentioned and nicely executed performance and the non-verbal nature really added to its accessibility. In my opinion the accessible nature if the production could be further heightened by the use of sign language as shown in shows such as The Forest of Forgotten Discos. Overall, it was a great step in the direction of re-engaging young people with the magic of story telling that doesn’t require a screen.