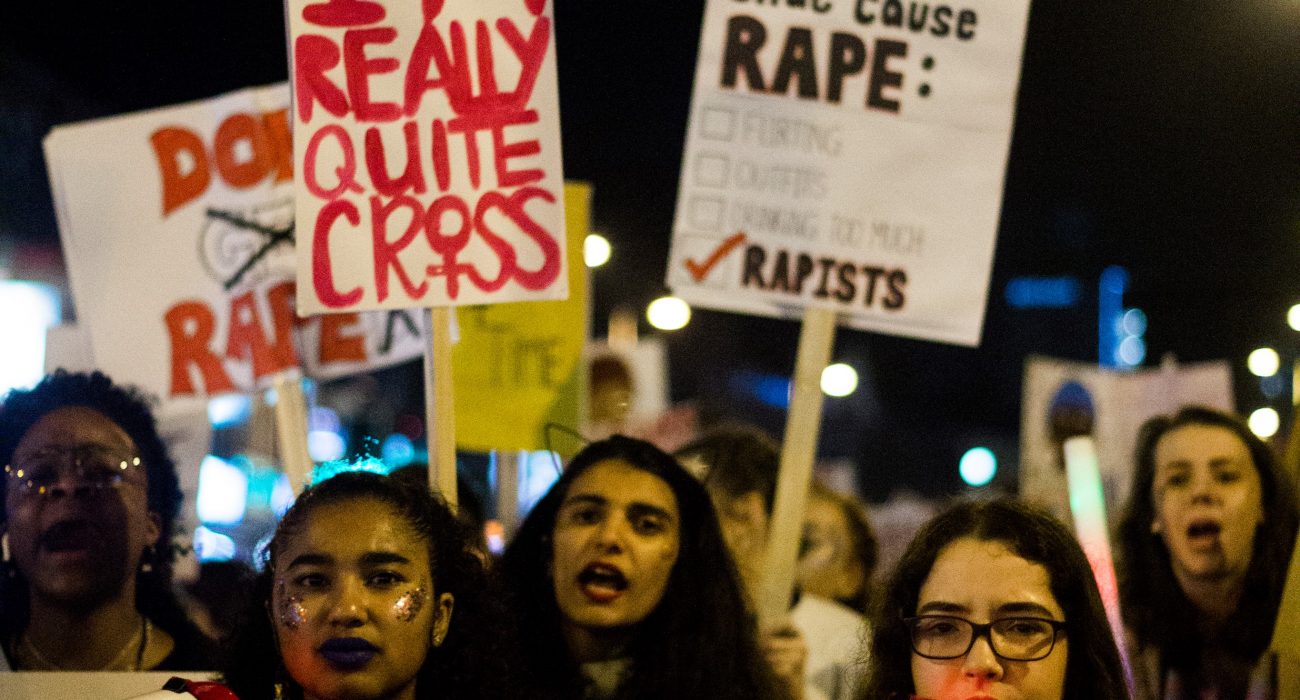 Reclaim the Night 2019 took place on Thursday 21st February. Women and men alike took to the streets brandishing banners and chanting “Whose streets? Our streets!” in unison. The annual march is run by the University of Manchester’s Students’ Union to campaign for public safety and protest violence against women. The campaign condemns street harassment, sexual assault, and victim blaming.

This year’s campaign aimed to increase and improve lighting in populous student neighbourhoods such as Fallowfield and Rusholme, as well as increase awareness of ways through which people can report incidents of sexual assault and harassment. It also urged people to lobby the Manchester City Council to expand funding for local services and reverse budget cuts to women’s shelters. These aims were publicised via social media campaigns, petitions, and posters adorning campus.

An estimated 3,500 people are said to have marched from Owens Park to the Students’ Union.

Owens Park’s Students’ Association’s president, Caroline Baigrie, shared on behalf of halls committees that “although the Reclaim the Night March happens once a year, it is important to always remember Reclaim the Night’s purpose, calling for greater measures to be taken in Manchester to keep us safe at night, whether by greater police presence or better-lit streets. Residents deserve to feel safe and student representatives should improve this by making structures more known such as the Manchester SU Safe Taxi Scheme.” This scheme enables students to call a taxi if they’ve run out of money and pay for it the following day.

On how Reclaim the Night has impacted her personally and the wider community, Baigrie added that it brings attention to the topic of safety at night in Manchester: “something that everyone is conscious of all year round.” Inspired, she noted the campaign’s success in encouraging people to demand to be kept safe. “There is a clear angle of Reclaim the Night towards women’s safety, and despite the campaign being relevant to all, it makes clear that at the centre of the issue of safety at night is female safety and victimisation of women, whether sexually or just being made to feel uncomfortable.”

Teodóra Gombos, first-year History & Economics student, felt encouraged after the march and spoke of the inspiration amassed by rallying as a community. “I felt empowered marching alongside thousands of other people who support each other. That in itself can create an impact – we all have different experiences and backgrounds, but we all want to feel safer on the streets and lift each other up.” Knowing you’re not alone is a good place to start when fighting for change.

An anonymous post on Facebook, which has garnered over 400 likes, had someone stating that Reclaim the Night gave them hope for women like themselves who have been subjected to sexual harassment and assault, in Manchester and elsewhere.

“None of my friends that marched with me know that I am a victim of severe sexual assault but coming out today seeing everyone in support of safer streets in Manchester gave me the power to not give a fuck, live in my truth, and empower others. Thank you so much to Sara Heddi, the fab organisers, stewards, volunteers, and everyone who showed up. We RECLAIMED THE NIGHT and will continue to do so. Mark our words.”

The unidentified then shared a link to the petition lobbying the City Council. The anonymity of the post highlights the ubiquity of women’s experiences tackling sexual harassment and assault. Although every individual has a unique story, the movement reflects the greater shared adversity of womanhood, much like how the #MeToo movement demonstrated the widespread prevalence of sexual harassment and assault.

The Mancunion reached out to Manchester City Council to find out how local authorities feel about Reclaim the Night and how they are tackling the ongoing problem of violence against women.

Councillor Nigel Murphy, Deputy Leader of Manchester City Council, said that the safety of Manchester residents is of paramount importance to City Council and that they want to “reassure the public that this city is a safe place to work, study and visit.”

He expressed that: “it is unacceptable that anyone should be the victim of crime and our advice first and foremost would be to always call the police if you or someone you know is the victim of a crime. Manchester City Council works closely with Greater Manchester Police, the Universities, and other partners to address student safety across the city.”

The Council wished to clarify that although one of the objectives listed by the 2019 Reclaim the Night campaign was to: “lobby the council to stop cuts to Women’s Shelters”; provision for women’s refuges has remained unchanged since 2014 — there are still six centres open in Greater Manchester, despite the fact that Manchester City Council has faced more than £300m in government cuts since 2010.

The councillor was aware of Reclaim the Night’s mission to create a more secure infrastructure and affirmed that street lighting in student areas meets the national standards in terms of brightness and coverage but that the Council is “always open to discussing with students where and how [they] can improve.”

Councillor Murphy concluded by saying that the Council would continue to work closely with their partners in GMP as well as the charity and voluntary sector to support any and all victims and work with communities to deliver effective support services.