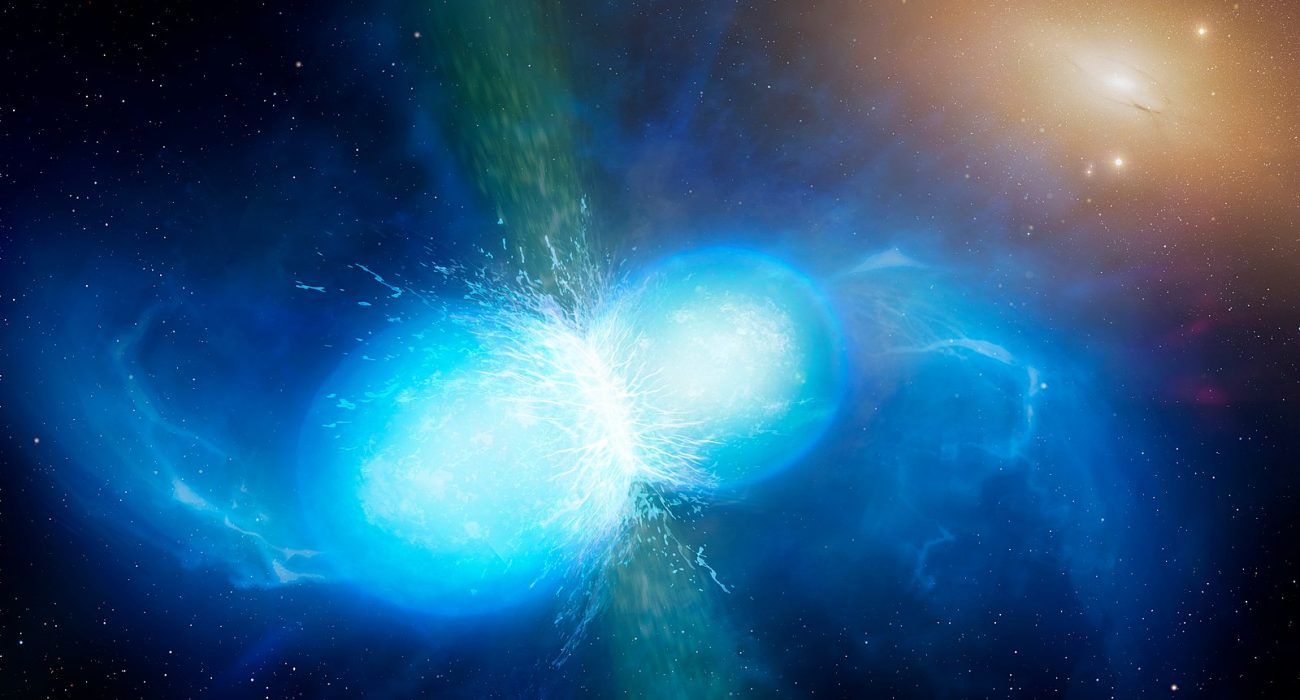 In an international collaboration involving radio telescopes from around the world – including the University of Manchester’s Lovell Telescope at the Jodrell Bank Observatory – astronomers have detected the presence of a jet of material emanating as consequence of the merger of two neutron stars. This collision between the two neutron stars in a binary system generated gravitational waves, which were first observed in August 2017 by the LIGO and VIRGO detectors. The event occurred in a galaxy approximately 130 million light years away from the Earth.

Neutron stars are incredibly dense objects which form as a result of collapsing stars following a supernova explosion towards the end of their life-cycle. They can be as heavy as the sun, yet compressed down to the size of a city, making them one of the densest things that have been discovered in the universe.

A binary star system is a star system which consists of two stars orbiting around a common centre of mass. It is estimated that as much as 85% of all the stars we see in the night sky are in binary or higher-multiple systems, whereas only around 5% of neutron stars are thought to exist in binary systems.

Since the initial observations of the collision event, astronomers have been tracking how it has evolved across the electromagnetic spectrum, from gamma rays, to visible light, all the way up to radio waves. Around seven months after the merger, the combined observations from radio telescopes on five different continents have established the emergence of a jet originating from these colliding neutron stars.

Following the merger event, large amounts of material and energy was ejected into space, eventually forming a shell around it. The astronomers have been tracing the evolution of this ejected energy at different wavelengths on the electromagnetic spectrum. However, it was still unclear whether it could pierce though the surrounding shell.

It was only through the use of highly sensitive radio imaging that the researchers were able to shed some light on this issue, using a technique known as Very Long Baseline Interferometry (VLBI), which allowed them to combine many radio telescopes from around the world. Through this international collaboration of researchers and the use of a total of 33 different radio telescopes, including the UK’s e-MERLIN array comprised of six large radio telescopes, the team was able to image and confirm the presence of a jet.

These findings represent the first case where it has been possible to relate the detection of gravitational waves to a light-emitting object, confirming the long-suggested association between neutron star mergers and gamma-ray bursts. The researchers expect to discover many more of these binary neutron star collision events in the coming years. Their results indicate that at least 10% of neutron star mergers should produce a successful jet. As more of these types of observations take place, it will allow astronomers to continue unveiling the processes behind some of the most powerful events in the universe.