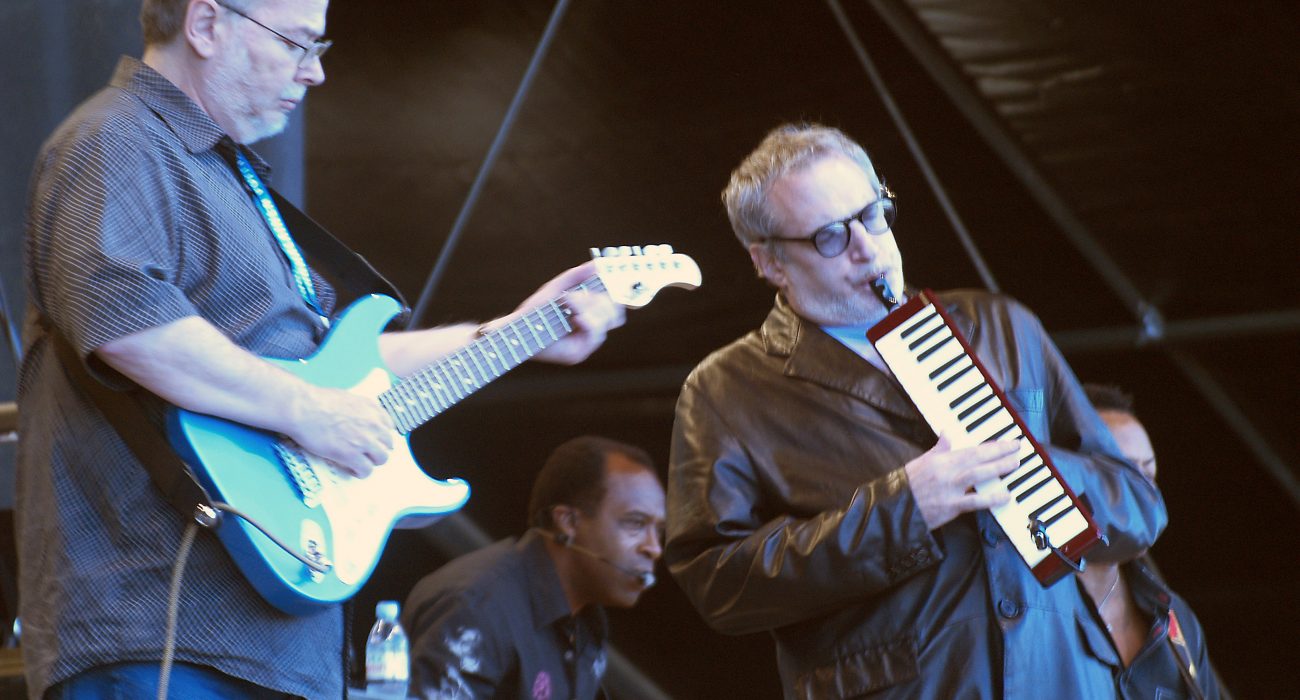 Their musical influence is beyond significant. Since their 1972 debut album Can’t Buy A Thrill, they’ve inspired musicians, writers and artists with their jazz-rock tracks and charismatic stage presence. Despite only frontman Donald Fagen remaining from the original line-up, age clearly hasn’t harboured his sheer talent and natural grace onstage. With the death of bandmate Walter Becker in 2017, it does feel somewhat bittersweet with the tour stretching over what would have been his 69th birthday. A subtle but beautifully tender moment in recollection of his late musical partner feels appropriate, with a microphone left empty in his memory reminding the crowd of this iconic partnership.

Steve Winwood provided a set which perfectly complimented what was to come. With old favourites and new tracks seamlessly blended, it didn’t feel like he’d aged a day from his early work. His vocals were strong and poised, his supporting band staggeringly talented and he effortlessly set the groundwork for the headliners, drawing the audience into the evening.

It’s a hard feat to make the intimidatingly large Manchester Arena feel intimate; the smooth jazz chords and lush vocals of Steely Dan’s best hits require some intimacy. But somehow this was obtainable. The room felt tight, intimate and friendly. And there was over 10,000 of us tightly packed into seated rows – it shouldn’t have been possible. It’s testament to Fagen’s skill and experience in performing to a big room that he tacked such a feat so fluidly.

The dynamics of the set is equally as impressive; it’s a level of live perfection that the music scene is lacking of late. There are no backing tracks, no over-producing; it’s a twelve-piece band, including brass section, which oozes talent and suspended the audience in awe at the power and passion behind each note. From the groovy funkiness of ‘Bad Sneakers’ to the staggering, ricocheting sax solos of ‘Bodhisattva’, this is a part of musical history that is truly timeless. It’s as though everyone in the audience is being taken back to the first time they heard each track, and it doesn’t take long for people to protest against the regimented seating and take to the aisles to dance to the empowering chords of ‘Dirty Work’.

Most of the people in the audience were listening to their tracks when they were new on the scene, but there’s a satisfying number of young faces in the crowd too, which is refreshing. It’s good to know that the roots of the music industry are still stretching out to new ears decades later. The passion, grace and ease of elegance in each of Steely Dan’s tracks is something that modern music desperately lacks. Every beat and key is laced with emotion conveyed seamlessly to the listener. The revival of Steely Dan to new ears couldn’t come at a better time, with Fagen being far from the end of his tether and their work in need of fresh recognition.

For many, it was an experience of a lifetime, transporting them to hot ’70s summers and reminding them of better times in a way that only the purest music can. Harmonies and perfectly timed solos, guitar riffs that encompass the best of the era like the closing one to ‘Kid Charlemagne’, left the crowd desperate for more.

Despite a understandable wariness of a British headline for an all-American band who have a reputation for straying into Europe rarely, Steely Dan left the crowd feeling poignantly sentimental. Closing on ‘Reeling in the Years’, Fagen successfully not only created musical art, but achieved the almost unobtainable, transporting his fans into a sphere of raw emotion, soul-bearing songwriting and rhythmic jazz-rock arrangements.