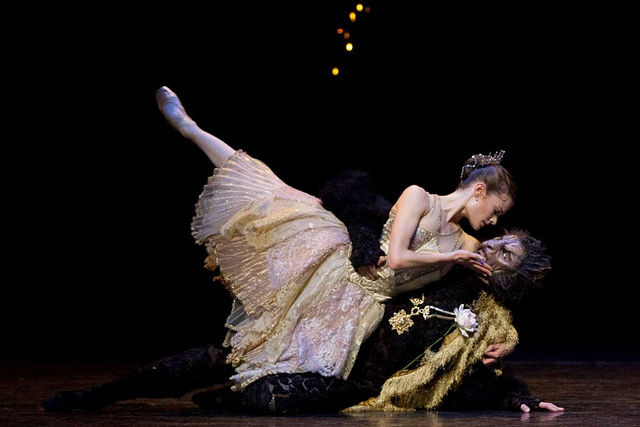 David Bintley’s mesmerizing adaptation of Beauty and the Beast was everything I hoped it would be. From the wonderful music to the incredible sets, it was hard not to feel spellbound.

This modern take on the classic fairy tale tells the story of Belle (Delia Mathews), who is taken away from her humble father and malicious sisters to live with the Beast (Tyrone Singleton). Their relationship grows yet she refuses his marriage proposals every day until she is whisked away by the conniving sisters, unable to return to the castle, leaving the Beast to weaken and die from a broken heart. Finally, she escapes and is able to return and reveal her deep affection for her captor upon which he transforms into a handsome prince.

The final number in which the now human Beast and Belle dance together was particularly moving, I was amazed by how affected I was despite the lack of dialogue. The music and dancing combined with the chemistry between Mathews and Singleton made this final dance particularly memorable.

The theme of magic was ever-present. Most of the characters wore gothic, animal masks to portray the spell that they and the Beast were under. For instance, his henchmen took on the appearance of rats with long tails and rodent-like masks. When Belle was magically taken to the Beast’s castle, she was escorted by a flock of crows wearing beaked-masks and heavily feathered bodices. And Singleton himself was transformed by incredible prosthetics to bear the appearance of a ferocious creature. This element made the ensemble dances even more spectacular.

I was awed by the grace of the dancers and the precision in which the choreography was carried out; elegant and perfectly in time. My favourite company dance was the ball scene which came directly after the intermission. The luxurious costumes, the triumphant music and the lively dancing made this scene quite a spectacle. The dancers’ lifts were especially beautiful and fit perfectly with the atmosphere of the ball. This scene was beautifully contrasted by a group dance involving the rich and greedy characters outside of the castle.

Another magical element was the transforming sets. The Beast’s home was composed of different layers that opened up to uncover a deeper level of the castle. The outside of the castle, intimidating and looming, parted like a giant gate to reveal the front door. Behind this, the final layer, the inside of the castle, was dark and oppressive but marvellously became bright and illuminated once the spell was lifted.

This may have been a modern adaptation but the moral of the story stayed the same; don’t judge a book by its cover. The shadowy and ominous castle atmosphere was vastly contradicted by the animated dancing of its people. The Beast surprised the audience with his intimate and elegant dancing despite his fierce appearance.

Overall, attending this performance was a pleasure. If you have not been to the ballet I urge you to go and surprise yourself. I for one will be waiting on the edge of my seat for the next ballet to come to the Lowry, or anywhere else in Manchester.