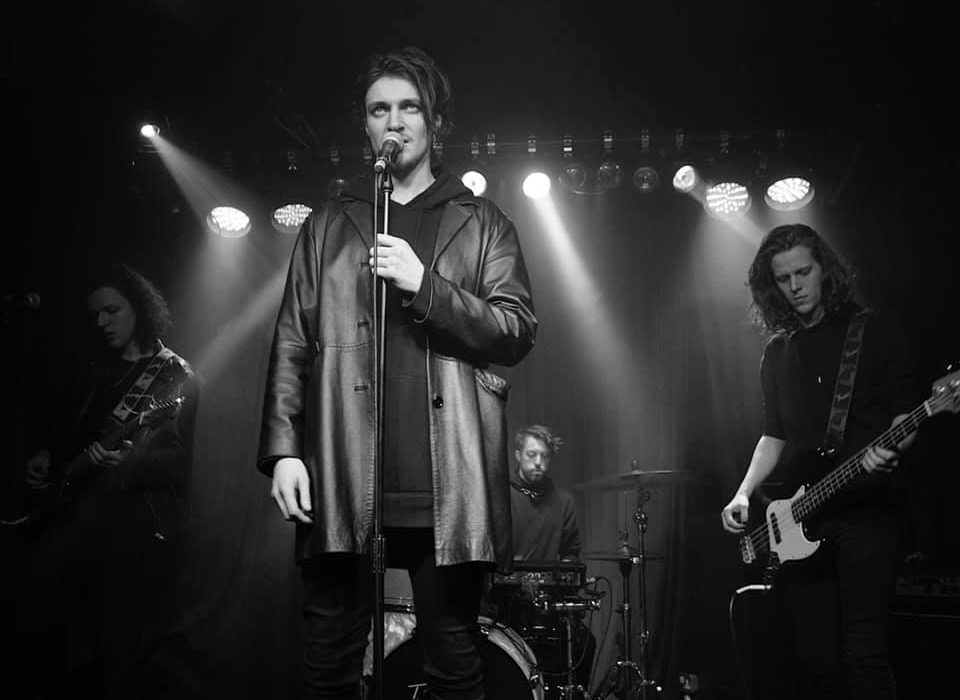 Liverpool fourpiece The Post Romantics are engagingly illusive. Playing only a handful of gigs in the last six months, predominantly in their hometown, it’s perhaps therefore unsurprising that they have yet to establish a firm following in sister-city Manchester.

There’s an interesting dynamic when you meet this group. Liam, Cameron, Connor, and Sam are part of what feels like an unsettlingly coherent musical brotherhood; in fairness, three of them are brothers, with only a few years between them, and Sam comes across as an integral part of that family unison. They’ve not always been musical, “we were more into sports,” Connor explains. Nevertheless, they were “exposed to music” from an early age, and there’s a sense that this early influence has guided their musical development since their formation — a year ago, they scrapped everything and “started again”. Why? It meant they stopped trying, and now are “100% more comfortable.”

Surprisingly, there’s a lack of creative clashing, and when they argue, it’s rarely about music. “We each prioritise our own instruments,” explains Connor. “We know what each other are going to do,” Liam and Cam add. And it’s this I think which exemplifies their cohesion onstage and provides some serious promise for the future. Musical partnerships between siblings are like a two-sided coin — they either work, or they end in catastrophe. But so far, it comes across with there being a degree of respect between each other, probably aided by the brief hiatus they spent following their own educational paths, ranging from architecture to psychology.

As for their fanbase, it’s split between London and Liverpool. They wouldn’t describe it as distinct or defined, but it differs between live audiences and online streaming. It’s evident from their live set that they have a base of core fans and spending a few hours out with them in Liverpool’s nightlife proves that they are an integral artery to the musical network they are a part of. There’s a sense of them being representative of a generation, which can’t be considered especially original in the grand scheme of things, but nevertheless is poignant.

Musically, The Post Romantics embody their hometown. They’re dynamic, vibrant, nestled very much on the peripheral of Manchester’s swarming music scene, but making serious waves in our direction. They’re hard-working, which is essential and shows their determination to succeed. Liam explains how they were rehearsing until 6 am the morning before a support-slot at a hometown gig with Paris Youth Foundation at the effortlessly trendy, Jacaranda Records Phase One on Seel Street.

Their evolution feels present in their work; having started out as a metal band, they then delved into trying to blend multiple genres and ended up “very pop-y”. Now they seem to have found their identity — for the time being, and it’s not necessarily what you expect. Strong bass riffs and a driving beat is a signature to their tracks. However, at times, it felt as though they were repeating themselves musically and they really came into their own when the guitar solos were given more freedom.

Their tracks with prominent backing vocals feel stronger and better defined, giving the vocals some texture against robust songwriting. The Post Romantics demonstrated their skill and passion for their work during this set. Despite some technical issues, they kept the crowd engaged and presented professionalism onstage which is a serious credit to them. It’s possible they’re not quite as set on their style as they might like to think ∞ but I wouldn’t be surprised if they evolve into something that the music industry really has space for.

We’ve got considerably more to look forward to in what’s left of 2019. With festival season quickly approaching, brace yourselves to hear a new single in the next couple of months, and potentially an EP by the end of the year. This feels like a significant stride forward from a band that there are relatively little of in the scene at the moment. Hopefully, the release of a body of work means a subsequent tour in the autumn season, and an increase in their profile in Northern hot-spots such as Manchester, Leeds, and Hull.

Desperately friendly, confident, and comfortable in the image they have created for themselves in the music scene, The Post Romantics offer a promising new dynamic to what’s being produced in the North at the moment. I for one look forward to seeing them live up to the challenge they have set themselves in an increasingly competitive and ruthless industry.

The Post Romantics provide a subtle indication that times are changing in songwriting and musical tastes, and there’s nothing more refreshing than that.