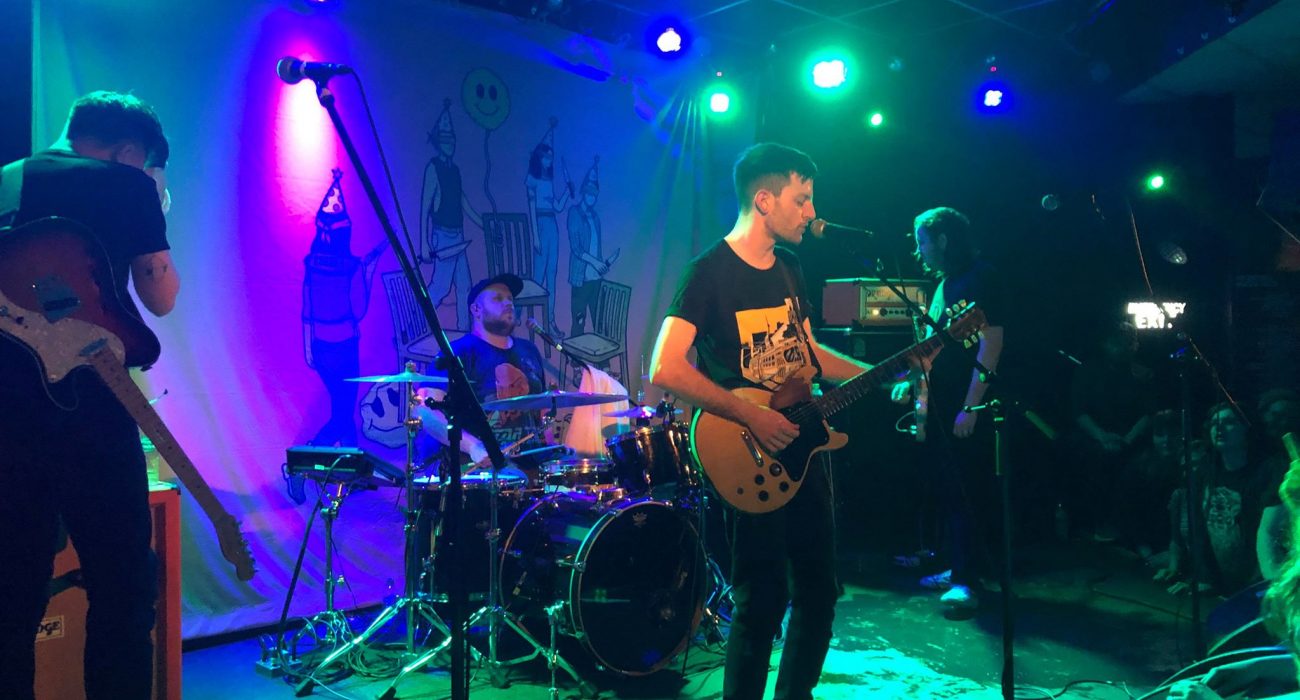 Punchy, emotional, and exasperatedly vicious are the words that come to mind when I finally heard the track ‘DVP’ screech out in a violently loud wave across the swelling crowd at Leed’s Brudenell Social Club last night. Without an ounce of irony, it was completely thrilling. To say I have been looking forward to seeing Canadian punk rock band PUP is really an understatement and without a shadow of a doubt, they really did not play a single note wrong. Well at least musically.

The surprisingly small venue seemed a perfect match for support band Milk Teeth who blazed through their set. Em Foster’s performance was brilliant, with an incredible vocal dexterity that dipped into metal territory. I was completely blown away by the contrast with bass guitarist Becky Blomfield’s softer, huskier vocals and they really complimented each other in a vocally diverse way. The energy and interactivity struck a perfect balance with the crowd and it created arguably one of the best supporting performance’s I’ve seen this year. Interacting and understanding the audience is so important within gig culture in the UK. Even when the microphone broke they still managed to keep the energy high and the atmosphere highly positive within the room.

However, the second headline act PUP entered the stage, the crowd became a vicious, mob-like pit, which is all part of the experience until a certain extent, and it seemed completely at odds with the beautifully, gradually built set up. The constant chants of “Yorkshire” are not fun or zany for any longer than about the first five minutes (I have been to enough gigs in Sheffield and Leeds to say it is downright annoying). However, the way the band dealt with it by calling the crowd out as “the problem” really didn’t seem to help the situation.

Another particularly painful segment, which they called “PUP Karaoke” involved the band asking a member of the audience to come up and sing ‘Reservoir’, a track from their 2013 self-titled album. They picked a lady from the back who despite claiming to know the words had absolutely no clue what was going on. I stood there fully aware I was about to witness a tragic performance as she flailed around. I almost wanted to get up there and to try and save it before the song was ruined entirely. This paired with an incessant amount of stage diving really set the whole tone wrong. Communication between the band and the audience failed here and I’m unsure as to who was to blame. However, letting the lady continue to struggle with the song was not cool and rather cruel for everyone involved. It would’ve been lovely to see someone really take it, who actually knew the words.

It seemed such a shame and a missed opportunity considering their heartwarming commitments when it comes to Charity work. This particular gig supported The Mermaid foundation which was set up to support gender diversity, specifically transgender children and young adults. This kind of support is really great to see and I hope this kind of work will feature and continue on their tours in the future.

Despite kicking off to an underwhelming and rather clumsy start the band surprisingly nailed almost every track that followed. They really have their punk rock craft down to an absolute art. Tracks such as ‘Kids’ from 2019’s Morbid Stuff really showcased their bittersweet, comically charged lyricism and there is somehow an extra bite about hearing it live that just cannot be recreated on record. ‘Familiar Patterns’ has always been a favourite of mine and, live it certainly did not disappoint. Zack Mykula provided a blisteringly epic performance on the drums.

My set list dream of hearing ‘Pine Point’ didn’t come true but I think it was probably for the best as the crowd frantically surged forward in a seemingly record breaking attempt for the most stage dives.

PUP have recently announced a forthcoming tour in November of this year, which will include a Manchester date at The Academy 3. The initial gig experience definitely should not deter from PUP themselves but this particular performance highlighted that unfortunately, you can’t choose your audience.