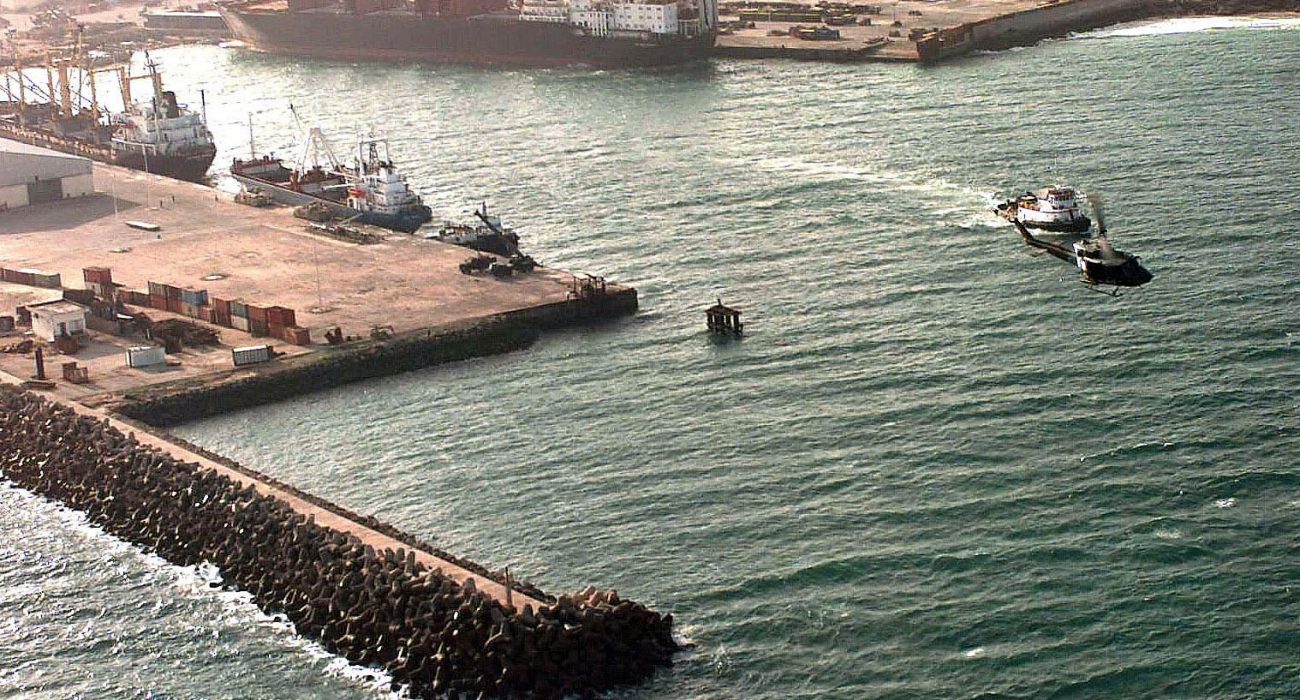 Aerial view of the Port of Mogadishu. Three cargo ships, large, medium and small sized vessels are moored to the docks. A tugboat is heading out of the port. A US Marine UH-1N "Huey" helicopter flies left to right at the right of the frame. The port played an important role in the support of Operation Restore Hope. Photo: Public Domain

Diaspora communities generally have complex and meandering relationships with their homeland. Whether you are first-generation or fourth, chances are that that connection to a land that you may have never even seen stays with you in an inexplicable way. In the case of refugees and their children, this relationship can be traumatic, confusing, and fraught because the relationship almost always is with a country that no longer actually exists.

The immediate effects of war are imminently clear; destruction of infrastructure, loss of lives, economic stagnation, famine, the list is endless. The materiality of these things unsurprisingly makes it impossible for many to focus on anything else, and this is no different in the case of Somalia.

With a climate crisis on its doorstep and decades of unrest and conflict, Somalia has been defined by devastating political and economic calamity. But what many do not note, however, is the cultural stagnation that has gripped the country – a nation known for its cultural richness has, over time, become censored and beaten into nothingness.

And this is the side of war that people do not speak of.

Whilst we focus on the physical; the levelling of cities and the inescapable spectacle of war, we miss that what we are truly witnessing is the very soul of a country being destroyed.

In the 1970s, Somalia bred some of the most innovative musicians and poets; the streets spoke of coral houses and cafes, every inch of Mogadishu was evidence of flourishing cultural and economic centre, attracting innovation and prosperity.

We have been told that New York, London, and Paris are the cultural capitals of the world. If you want music or art or theatre that’s where you have to be, but this wasn’t always the case. Now for all you art-snobs out there who have began to froth at the mouth, I’m not suggesting that Mogadishu, even at its height, was Paris, nor am I suggesting that I think that it should be. But the complete erasure of the history of this country, and many like it, creates the image that those in the so-called ‘third world’ have perpetually been in a state of conflict. This erasure has created an image that violence is the only language they know when, in reality, for centuries Somalis used poetry to navigate and avoid conflict – and the nomadic lifestyle which defined Somalia for centuries lends itself quite well to peace.

I only stumbled upon this history fairly recently. Before that, to me, Somalia was just another nation embroiled in ceaseless conflict; a country that I probably would never see again, but it is upon finding this history that has brought Somalia to life for me.

The culture of a nation is what makes it human; it is what we leave behind and what we live for while we’re here. The erasure of said culture allows us to comfortably ignore the humanity that still lives in the conflict. So we must responsibly teach the past, but more importantly we need to prioritise investing in future theatre, music, literature and art. It is through these mediums that we find the loudest voices of political dissidence and scorn; the revolution starts with a pen or a paintbrush or an instrument.