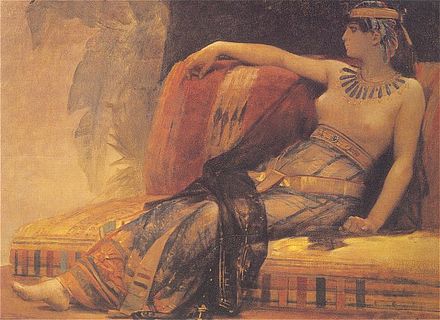 Cleopatra is a historical figure representative of female power, dominance and struggle in patriarchal histories of the world. However, she is also the victim of the fetishisation of ‘foreign’ sexuality and subversion.

Cleopatra has historically and culturally been represented as an untrustworthy figure. She is written into the role of a seductress, whose main historical purpose was to be detrimental and dangerous to the stability of the Roman Empire.

Through historians such as Plutarch, and writers such as Shakespeare, Cleopatra’s representation has been at the mercy of those more concerned with stories of Rome. Her femininity is overarching, and her sexuality decadent and corrupting, for Plutarch. Antony is simply a victim of her sexual, political and romantic exploits in his retelling.

She is probably one of the most recognisable historical figures to be misrepresented in this way. She was widely portrayed through a Eurocentric lens, due to ‘Orientalism’.

Though a descendant of Ptolemy, she is seen as ‘Eastern’, an ‘other’ unbounded to the morals, laws and civilised ways of Europe. These are all weighted terms. They play a large part in how even today’s media practices can create images of people and events we know little about.

However, there is a certain tentativeness that is now applied to representations of the ‘foreign’ in older texts. Jane Eyre has a backdrop of slavery and Mansfield Park has plantations integral to its plot. These settings and themes are culturally representative of economic, social and political activity at the time. By re-reading these texts alongside literary theory as found in Said’s Orientalism, Spivak’s In Other Worlds or the works of Homi Babha, the problematic elements and prejudices codified can be analysed in relation to our society.

By actively confronting prejudices, we begin to deconstruct popular myths that surround them. We can also find out how our approach to thinking about other societies has or hasn’t changed.

This month, join our writers at The Mancunion who will explore books they’ve learnt from, but have also taken issue with due to very real issues of prejudice.

Demystifying figures like Cleopatra is one necessary step in reclaiming our concurrent histories as a globe.