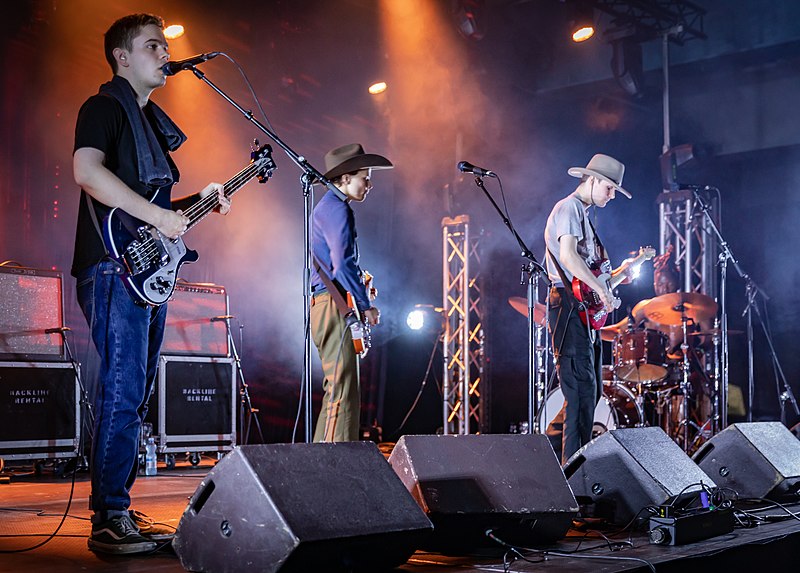 The most talked-about band in the country graced Salford’s White Hotel on Tuesday night, crashing through much of their debut album Schlagenheim and improvising and deconstructing as they went.

The math/noise rock band began 2019 as the darlings of the indie music press, and they have only enhanced that cultish status through the year. Just six months separated the unbelievably tight-sounding KEXP set on YouTube in January and their Mercury Prize nomination in July.

Like the band, for many the venue is something heard about in whispers and rumour long before actually being experienced. The unassuming space, with its stage tucked into the corner, is itself hidden off a back road among car parks and old warehouses. The two are well-matched in their peculiarity.

Black Midi emerged wordlessly through a red-lit haze, greeted by the sound of a distorted synth note  and began several minutes of improvised playing, all frenzied drums and shrill guitars. Here and for the rest of the set, vocalist Geordie Greep circled and tip-toed the stage, head tipped downwards and with his eyes firmly upon his bandmates. His presence complimented the unbridled drumming talent of Morgan Simpson, the standout performer of the set. Simpson toyed with the band throughout the night, as impressive in the cacophony of these improvised passages as when keeping his guitarists in check during songs from the album.

From this came the first recognisable track ‘Of Schlagenheim’, which was marred by the fact that Greep’s microphone was inaudible for its duration. Technical issues all resolved, the sparse ‘Speedway’ came next, built around two notes flitting between friendly simplicity and something impending, and underscored by Cameron Picton’s bass. Picton also delivered vocals for the track, deadpan lines cataloguing those landmarks of the outer city: ‘new flats’, ‘stock car racing’, ‘dogshit parks’.

The majority of the crowd, who weren’t quite the right fit for openers, the hip hop outfit 404, were of an age that could probably remember the peak years of The Fall, formed by Mark E. Smith while working over at Salford Docks. Comparisons between the two bands were abound, if not quite sonically then definitely in spirit. Towards the front and among the younger members, there was a loud back-and-forth between two groups which never spilled over into anything, interrupted only by the songs themselves which came and went rapidly.

‘Bmbmbm’ was as heavy played live as I had hoped. The band here continued to mess around with the shape of songs, stop-starting, reconstructing. A few seconds of the ‘Friends’ theme quickly became that distinct, ominous stabbing riff. Greep was at his most striking here: insisting and cooing, cawing in infantile howls (‘shemoveswithapurposeanditissuchamagnificentpurpose’).

Guitarist Matt Kwasniewski-Kelvin’s shrieked vocals on ‘Years Ago’ were another highlight of the set, before Black Midi ended with the closing track on Schlagenheim, ‘Ducter’. The complex intensity of some of the album’s other tracks were a bit lost on the night in the fog of noise (‘Of Schlagenheim’, ‘Reggae’, ‘Neat DT, MI’), but this one survived intact. That repeated rising build-up in the song, calling back to bands like Slint, was brilliant to hear live. I also would have loved to see the seven-minute track ‘Western’, probably omitted from the setlist for being too melodic.

Greep’s three bandmates departed and left him curiously alone on stage. The crowd clapped expectantly, three staggered rounds of applause for what turned out to be just him slowly putting on a mac. Then he disappeared, too, still wordless. 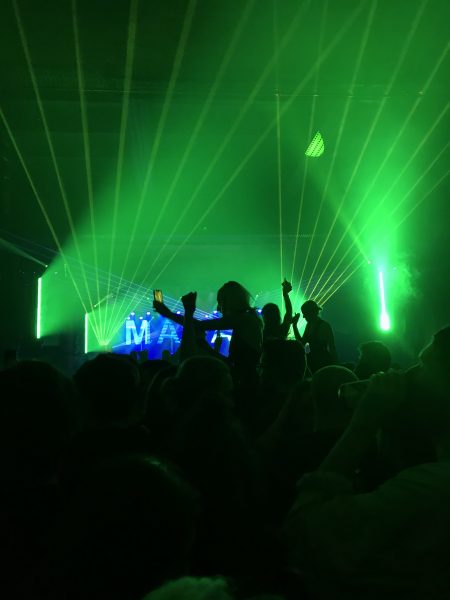