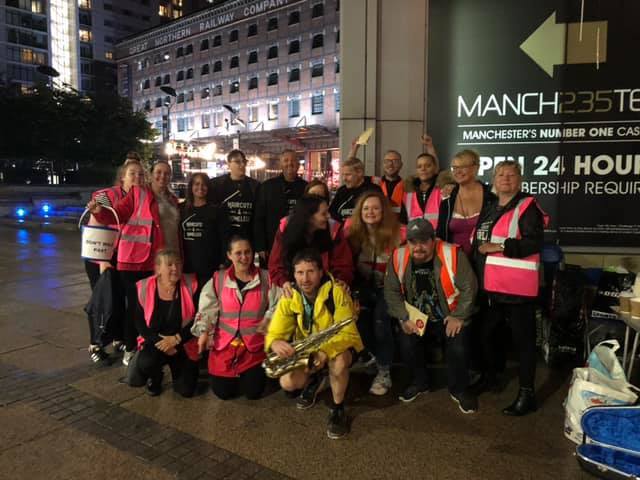 ‘Don’t Walk Past’: The delivery scheme for people living on the streets in Manchester

Don’t Walk Past is an original scheme to feed the homeless throughout the streets of Manchester and Salford.

At 7pm, Monday to Friday, the group delivers fast food as well as healthy meals, coats, hats, sanitary products, and other essentials.

Members of The Don’t Walk Past team fill up a van with insulative food delivery bags, containing a variety of meals prepared by volunteer chefs as well as savoury food from chains such as KFC and Greggs. Large companies such as these are part of a food donation scheme, meaning that any of their leftover food is distributed to homeless people.

The organisation has stated that they aim to help as many homeless people as possible that they can find on any given night: “We have been doing this since the winter just gone and our group is doing a very good job. We do what we do by donations only up to now.

“Including myself, we have three drivers who drive round Manchester looking for our friends to feed. We have recently been signed up and now receive Greggs surplus food 3 nights which helps us to reduce the cooking our cooks do per night.”

Don’t Walk Past are the only outreach team to go out every weeknight to support the homeless. The group was set up after the founder, Ronnie Hillyard, was shocked by the vast numbers of people living without shelter, especially with the daunting colder months approaching.

Hillyard stated, “I went driving around one night and saw a one-legged man in wheelchair soaked wet through, and thought, ‘that can’t be right'”.

From there on Hillyard has managed to feed over 100 people in a night and said he could “drive around for another couple of hours if [he] wanted to.”

The organisation is reliant on donations from large companies and the public to continue helping those who are homeless in Manchester.

Speaking to the Manchester Evening News, Mike, who has been homeless for three years, explained the positive effect the project has had on his life: “[Don’t Walk Past] are a massive help, sometimes without these lot I wouldn’t have clothes. I’ve got a waterproof coat in my bag that I’ve had off these. Sometimes we can get inundated with food, and other times not so much, so without these guys we’d have nothing.”