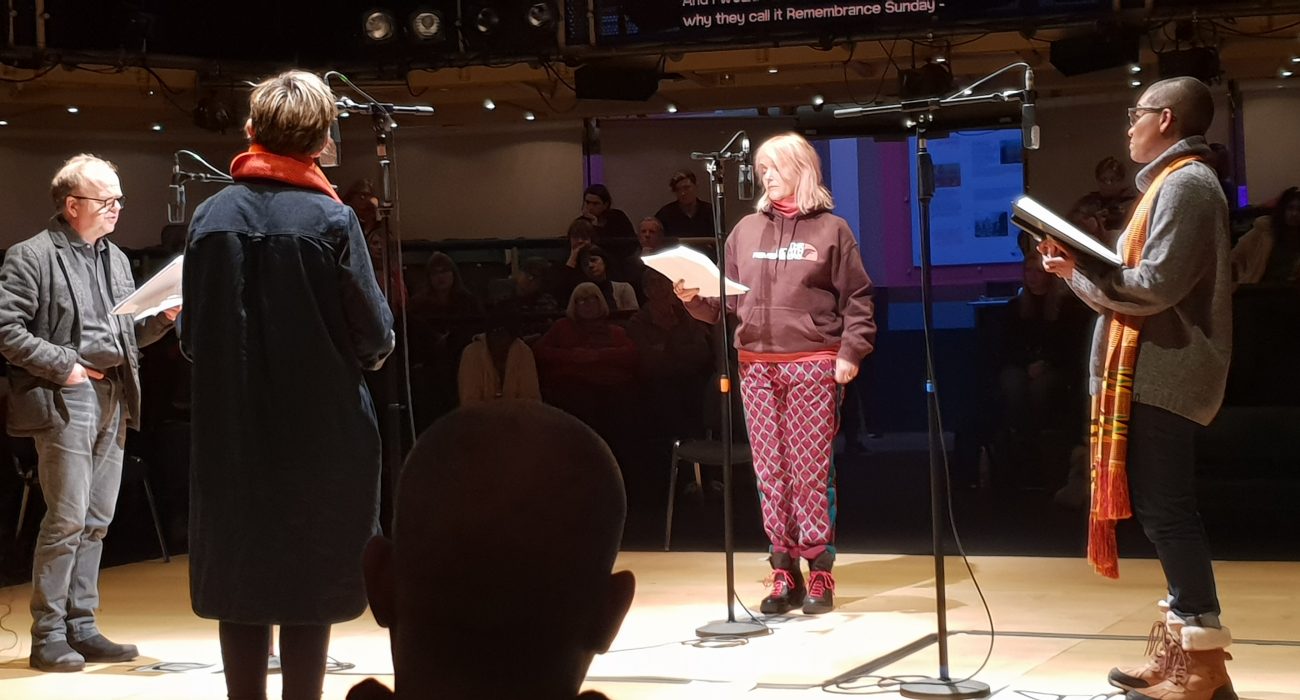 To commemorate Memorial Sunday and Monday this year, the Royal Exchange hosted Neil Bartlett’s 24 Hours of Peace. This was not so much a play as it was a piece of performance art and, as the name suggests, it ran for twenty-four hours from 11am on the 10th to 11am on the 11th.

Over the last year, Bartlett conducted interviews with one hundred people, all of whom have careers related to creating peace. These interviews were then combined into a monologue, sometimes overlapping, to be read by performers – including some very big names. The performance commemorated not the hundredth anniversary of the end of World War I, but the first two minute silence on Memorial Day. Bartlett wished to ask whether we could bring about peace using silence.

As I write this, the performance is still going on. I went to watch at 2pm on the Sunday and stayed for a couple of hours. Despite probably being the biggest name there, I decided not to time my visit with (Golden Globe, Emmy & 4 x BAFTA nominee) Toby Jones, because he was not arriving until later in the evening. I was, however, lucky enough to arrive right when Miranda Richardson made her first appearance. Richardson has been nominated for an Olivier, 7 Emmys and 7 Golden Globes, winning one for the latter two, so it was great to see her onstage. The event also featured Adjoa Andoh (Invictus), Liz Carr, and Royal Exchange Associate Artist, Julie Hesmondhalgh (Coronation Street).

The Royal Exchange’s iconic circular theatre space had not been decorated at all, and the actors wore their own clothes, rather than costumes, and read from scripts. This broke down the barrier between audience and performer, reminding us that these were real stories from real people and not fictional characterisations by larger-than-life stars.

I do, however, wonder whether it could have been made more gripping. With no action occurring onstage, and audience-members coming and going throughout, it was often easy to get distracted and miss out on important moments. The speeches made should certainly not be sensationalised as they are real accounts of series topics, but something could certainly be done to make us pay more attention.

In addition, I cannot decide whether the names of the performers should have been announced. Upon our arrival, we were given timetables detailing which performers would be on at what time, but this hardly narrowed it down. On the one hand, the piece was not about the speakers at all but the words they were saying and the people who spoke them originally. However, many of the speakers were new talents from youth programmes at the Royal Exchange, and it would have been nice to recognise them for their abilities.

What can be commended about the piece was its accessibility. At certain times, the spoken text was projected onto screens all around the theatre, right as it was spoken. There was also great diversity, both in the speakers chosen to read and in the stories I heard. Bartlett talked to “MPs, diplomats and armed force veterans; to negotiators, protestors and activists; to ministers, rabbis and imams.” I was particularly interested to hear accounts from members of NOMAD (Nations Of Migration Awakening the Diaspora), a new charity for young people of refugee backgrounds, and looked them up as soon as I got home. Having such variety in the stories told provided an angle we do not usually see on Memorial Day, reminding us that, while its tragic subject ended a hundred years ago, there are numerous tragedies still taking place to this day.

Bartlett provided an alternative approach to Memorial Day: that, to achieve peace, we need to speak out as well as giving a moment of silence for those lost. I left the theatre with one key lesson stuck in my mind. One of the accounts given was originally from a British Air Force officer who recounted something he had once been told by a Buddhist monk. He was told to not even feed the fire of small arguments between friends because then you are causing conflict, and this was one thing I resolved to do in future.