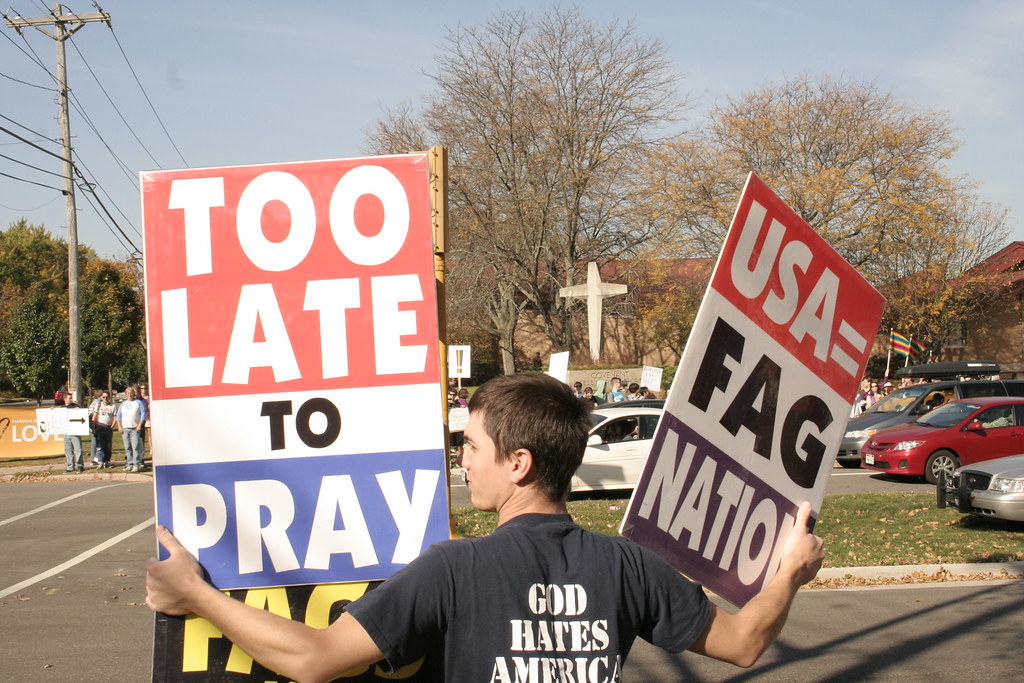 Activist and ex- Westboro Baptist Church member Megan Phelps-Roper appeared at Deansgate Waterstones to talk on her new autobiography: Unfollow. The talk began with a brief extract from the book quickly followed by an in-depth discussion with interviewer Simon Savidge and later, a Q&A.

One of my favourite elements of the talk was its exploration of bias and how the Westboro Baptist church has been able to continue, not solely because of its own prejudices, but also because of the bias of the rest of the world, as outsiders throw things and hurl insults in the presence of young children.

Phelps-Roper was quick to raise how counterproductive this is, stating that as a child, “seeing the way people responded to us, it was clear to me: we were the good guys and they were the bad guys”. This conclusion was completely understandable from a child who had faced so much aggression so young. The importance of how we interact with those we disagree with rang in the audiences ears as Phelps-Roper described how the hostility of outsiders led her deeper and deeper into the church.

In fact, Phelps-Roper had not initially viewed her actions in the church as unkind, she discussed the Church’s somewhat Utilitarian justification for their actions. They did not see themselves as hateful but attempting to ‘save’: “For us this was the hatred of God. This was the only way to show love for your neighbour”.

It seemed inevitable to Phelps-Roper, while growing up, that the Church must bear the burden of society’s loathing. “Jesus was hated,” her ‘Gramps’, the founder of the Church would say, “How terrifying to be liked, the false Prophets were liked.”

Whilst again, this line of thinking is understandable from a child, I question whether the adult Church members truly feel this way. Thinking back to Louis Theroux’s various films with the Phelps family, I remembered their wide smiles as they held ‘God hates fags’ signs. Is this the satisfaction of doing God’s work? Phelps-Roper acknowledges how “appealing” it was that “social niceties had no power over us,” and this, I think, is the unique attraction for members above all else.

Perhaps this is my own bias, as a Theology, Philosophy & Ethics student I have always found complete conviction of one’s beliefs difficult to understand. The more I learn, the more I find that language barriers and censorship play a huge role in our belief-systems. In fact, learning about some of the flaws in Biblical translation from Hebrew, while debating Blogger David Abitbol, founder of Jewlicious.com, over twitter, was one of the key reasons for her leaving the church.

More than this though, she seemed to suggest, was the kindness of strangers like Abitbol and lawyer Chad Fjelland, who was polite in urging her to consider the families of those whose funerals she had picketed. Phelps-Roper went on to marry Fjelland, a bizarre yet oddly romantic love story.

Whilst I thoroughly enjoyed the talk, it was not entirely without its downsides. Although the emotional ramifications of affiliation and rejection were certainly engaging, I left with a lot of unanswered questions. For example, at one point Phelps- Roper mentioned that her Grandfather, the Church’s founder, had been a civil rights lawyer prior to this. His “First crusade was against racism in America”.

How does one go from a civil rights lawyer to founding such a hateful church? Did the Phelps family still put their many law degrees to any use?

It was interesting to hear Savidge talk about his initial reluctance as a gay man to interview Phelps-Roper who had played a part in causing the LGBTQ+ community so much pain. Phelps-Roper’s bleak recount of the church’s targeting of gay people including a childhood ‘christmas’ song referencing “bloody rectums”, was deeply disturbing and made Savidge’s overcoming this reluctance all the more admirable.

Whilst their discussion of sexuality was fascinating, I spent a lot of the talk waiting for race and gender to be explored in slightly more depth. I can appreciate that whilst the topic of women in non-traditional religious movements is a field of interest of mine, that may not be shared by the masses.

I was expecting more discussion regarding gender roles in the church as Phelps-Roper merely alluded to their sinister presence, recalling what had happened to her mother, Shirley.

Shirley, an important figure within the church’s power, was suddenly stripped. Several men had overnight, appointed themselves as elders and siezed power of the church, shunning and ostracising her mother. I wanted to know more about how this patriarchy impacted the women of the church but I suppose it isn’t hard to imagine.

A final point of frustration for me was that during the Q&A, all of the people chosen to ask questions were men. I had a few burning questions and was disappointed at the lack of variety of audience voices and felt that this should have been prevented.

Despite this, the evening was a fascinating one. I cannot fathom how difficult it must be to leave behind your family, your religion and everything you know, nor the difficulty of your moral code dramatically shifting, and your past actions completely misaligning with it.

To take responsibility for this, apologise and try and help others to do the same is something most of us would likely struggle to do. Megan Phelps-Roper spoke eloquently and unreservedly about her past and her present. I am very grateful to have attended such a powerful talk.