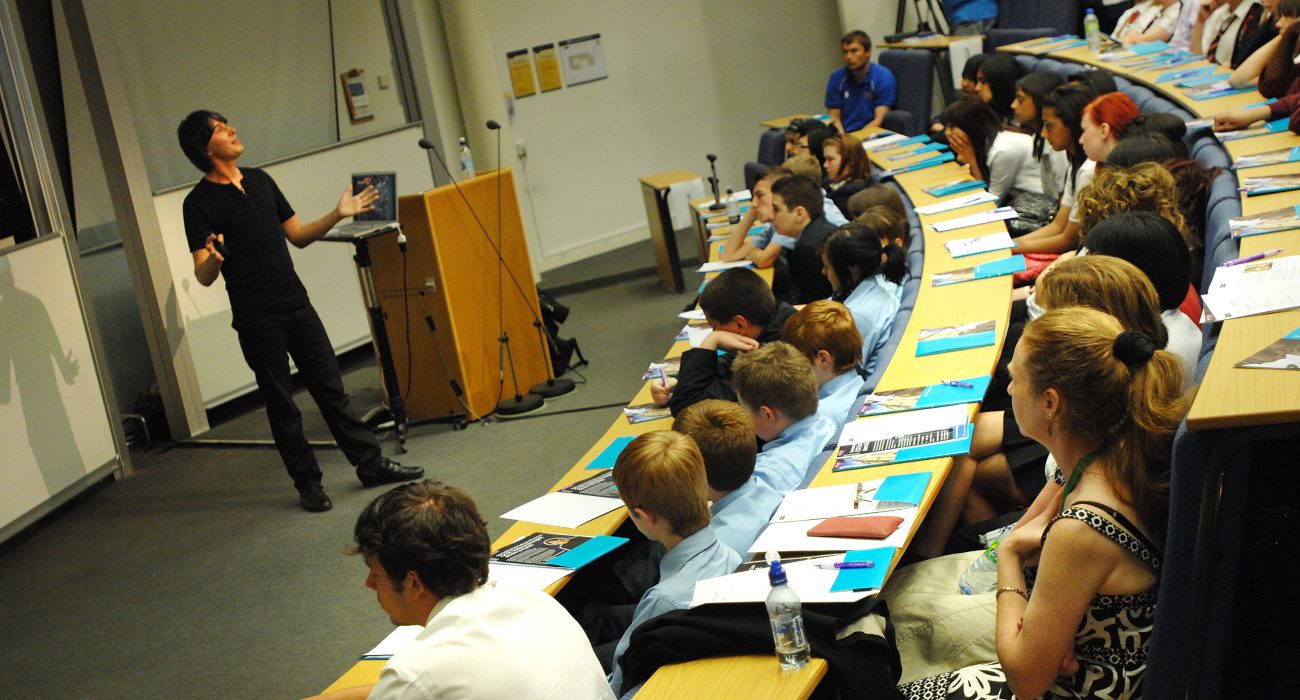 Professor Brian Cox lecturing at the University of Manchester. Photo: BC033 @Flickr

Striking staff are appealing to Brian Cox not to lead a lecture at the University of Manchester during the UCU strikes this week.

The celebrity Professor of Particle Physics is due to lecture tomorrow despite ongoing industrial action at 60 universities across the UK in protest of pension cuts, pay inequality and job insecurity.

Wendy Olsen, an Executive of UCU and Professor of Socio-Economics at UoM, spoke to The Mancunion about the matter:

“We would appeal to Brian Cox not to cross the picket line. We ask him to delay his talk or give the talk in the union teaching schedule. And I myself would like to ask him to change the date of this talk and join the union and, if he joins the union, he can give the talk at the UCU Strike Teach-Out.”

The University of Manchester branch of UCU describes the Teach-Out as ‘an alternative education programme of talks, discussion and participatory events’ which are in place of regular teaching during the strikes.

According to striking lecturers at UoM, Professor Cox’s lecture is “not a union activity” which constitutes as “breaking the strike by crossing the picket line”.

“If another academic – it doesn’t matter if they’re a union member or not – crosses a picket line, they are a ‘scab’,” one UCU member said.

Professor Olsen told The Mancunion that UCU members are “very concerned about the number of people who are teaching”. However, she added that she understands “if they have chosen not to join the strike as this might be for personal reasons or political reasons. They have the right to continue going to work.”

@ProfBrianCox Hi Brian, as a colleague at the University of Manchester I'm asking you to please not break the picket line and deliver your lecture on Thursday morning. We're striking over pensions, pay and conditions and would appreciate your support #UCUStrikesBack

Professor Brian Cox is not the only high profile lecturer to cross the picket line during the various University strikes this decade. In 2014 Tristram Hunt, former shadow education secretary and lecturer at Queen Mary University of London, was criticised by UCU members for breaking the strike to lecture undergraduates taking his unit on ‘Marx, Engels and the making of Marxism’.

At the time he defended his own decision for crossing the picket line to teach a lecture on socialism: “I support the right to strike for those who have balloted to picket. I have chosen not to join the strike.” Hunt added that his “personal commitment remained to the students” he teaches.

UoM students who wish to attend the UCU alternative education programme during the strikes can find the timetable on the Teach-Out! Facebook event page.

Update: Since this article was published The Mancunion has recieved information that Professor Brian Cox cancelled his lecture this morning (Thursday November 28th).