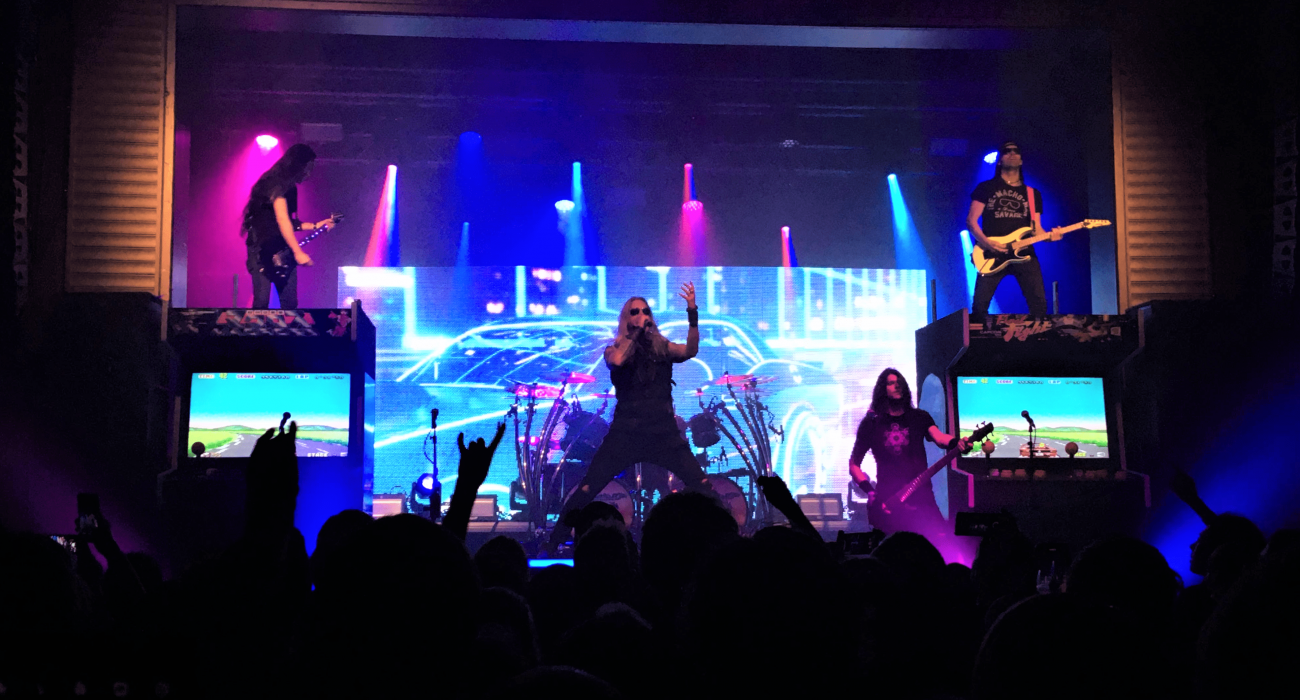 Dragonforce are a British power metal band, known for their extremely technical guitar work, fantastical lyrics, and retro video game inspired stylings. They rose to fame through the 2007 game Guitar Hero III: Legends of Rock, where their song ‘Through the Fire and the Flames’ was regarded as the hardest song in the game and gave them infamy in the video game and guitar world. And so, going into the gig, I was curious as to how they had evolved beyond their Guitar Hero status.

McRocklin & Hutch kicked off the show with their shredwave sound, where melodic guitar passages are played over chilled out lo-fi beats. They were certainly a contrast to what would be expected from the high-octane performances of Dragonforce, but nonetheless they provided a relaxing opening to the gig — although their music was not particularly interesting or unique.

This was followed by the all-female Japanese power metal band Lovebites whose sound was certainly more in line with what you would expect from a Dragonforce gig; the crowd seemed to engage with them much more. Their doomy riffs and tight performances filled the venue much more than McRocklin & Hutch’s shredwave sound could, however, they lacked a little of the stage presence you would expect given the weight of their music. All five musicians stayed mostly rooted to the spot for their set and didn’t attempt to fill the stage in the way that their sonic atmosphere gave them free rein to do, and so their short set left me with a feeling it was lacking something.

Finally, the Dragonforce set commenced with a tension-building laser show that pierced the audience and set the retro atmosphere for their arrival. They started the set strong with the opening track from their new album Extreme Power Metal, ‘Highway to Oblivion’, and it was instantly clear that the band was as vigorous as ever. Leading up to the tour they had issues with finding a bass player, and so the touring bassist ultimately had to learn their entire setlist two weeks before the American leg of the tour, yet none of these troubles were reflected in their music. The rhythm section gelled together seamlessly, Marc Hudson’s energetic vocals showed no sign of strain from the tour and negotiated the higher passages of their songs with ease, and the lightning-fast dual guitar work of Herman Li and Sam Totman tore up the venue. It was clear from the outset that Dragonforce were on top form.

However, as they launched into their following songs, it became difficult to tell the difference from one to the next. When the band only has the one trick up their sleeve of insanely tight playing and ludicrously fast guitar solos, listening to a full gig of it soon becomes tiring. They also made no effort to eschew their guitar hero image, with Herman Li sporting a guitar which lit up as he pressed the frets for certain songs. The staging, with two retro arcade machines on either side, initially seemed to be an interesting use of space, but soon seemed to be much more of a distraction from their actual performance. Their set limped from one similar-sounding song to the next, with not much to differentiate the cheesy key changes and bland pop-inspired sound which was in nearly every song.

Despite all this, as they closed their main set, it felt as if it had been cut short, not least because they had failed to play their most successful song, ‘Through the Fire and the Flames’. Finally, after a very forced amount of time, the band slowly waltzed back on, and performed a very underwhelming cover of the timeless pop classic ‘My Heart Will Go On’ by Celine Dion, which fell in to the typical trap of most metal bands covering pop songs — simply playing the exact same song but through unfitting distorted guitars and at a far too fast tempo. Finally, they played ‘Through the Fire and the Flames’, which was undoubtedly their best song of the night, and certainly ended their set on a belated high note.

Despite all my gripes about the unvaried setlist and predictable encore aside, certainly, the most enjoyable part of the gig was seeing the crowd’s reaction. All the cheesy gimmicks of the retro stylings they have built themselves around really resonated with their fanbase and showed a certain nostalgia that I perhaps was missing out on. When the band took a break to show retro game system adverts, they loved it. When the singer took a guitar and started playing retro video game themes, they loved it. And seeing the floor shake as a roomful of people start jumping up and down to the intro to ‘Cry Thunder’ was certainly a powerful experience.

But the audience’s contrast of emotion in the next song was poignant as they all got their flashlights out to wave along to ‘Remembrance Day’, the power ballad of the setlist, was an emotional high of the show. The pantomime like call and response with the singer and the audience before the obvious encore seemed to be fully in spirit with the cheesiness that was to be expected from the rest of the performance. Some of the gimmicks seemed to even be rather interesting, such as Herman Li livestreaming sections of the gig to Twitch, tapping into a unique idea, and playing to their advantage by engaging with their fanbase which largely comprised of gamers.

Ultimately, the Dragonforce gig was nothing exciting; however what to me was a gimmick filled show of lasers and retro culture had a deep nostalgic connection to most of the audience which was in itself probably the most powerful feeling from the gig. The band seem to be fully embracing their video game roots, both through their music and through their set, and whilst this may exclude new listeners, they seem to have garnered an international fan base of dedicated fans with whom their music resonates and indulges them in their own nostalgia in what is ultimately a fun and harmless set.