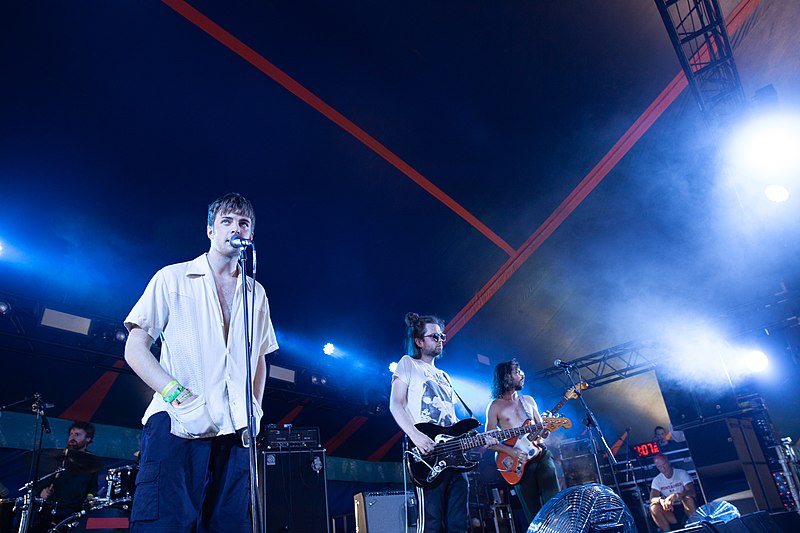 This year has seen Fontaines DC resurrect post punk guitar music and bring it into the mainstream. Subtly laced in political turmoil, their debut album Dogrel has been dubbed the best album of 2019 by the likes of Rough Trade and BBC 6 Music’s Lauren Laverne.

Manchester is arguably one of the most post-punk friendly cities in the UK, meaning their sold-out gig at O2 Ritz was wrapped in anticipation, and seemed set to act as a celebration of the end of an explosive year for the band. But Fontaines DC reciprocated little of the crowd’s excitement or buzz, instead portraying a show of tiredness and fatigue.

Kicking off the show with ‘Hurricane Laughter’ the front man Grian Chatten came on stage to fierce strobe lighting and an erupting roar from the crowd. His demeanour remained expressionless as he recited the lyrics, but this sense of calm added a great contrast to the grinding electric guitar and manic crowd.

Before the first song was over, crowd surfing had commenced. Fontaines DC seemed unimpressed by their fans’ instant enthusiasm, seemingly needing more time to warm up before interacting with them. Even whilst they performed their track ‘Too Real,’ arguably the highlight of the night, glimpses of Chatten and the band amidst the harsh strobe lighting showed nothing but sullen expressions.

Whilst the first half of the gig had the band testing out what must be assumed to be new material, the latter half was an efficient run down of their most-loved tracks. Playing unreleased music, especially from such an exhilarating new band, usually adds nothing but excitement to the gig. However, by giving no intro or explanation before or after playing the new tracks inflicted confusion on the crowd and led to the buzzing atmosphere stagnating.

Rushing through the album tracks in the latter half of the gig did not do much to improve the half-hearted atmosphere; the lack of passion and emotion in each song gave the band a surprisingly cold and disconnected frontier. The rigid setlist and complete absence of any experimental instrumentals, or even the slightest variation of how they are presented on the album, seemed to further disconnect the band and the crowd.

Having spent the whole year being credited for their amazing musicianship, the safety of the setlist was disappointing. Quality-wise, nothing could be faulted. But entertainment wise, the band offered little, with the first words that were uttered in the gig being “we don’t play encores,” before proceeding with the final song ‘Big’.

Many of Fontaines DC’s songs are short and sweet, ending abruptly just as listeners get into it. No song gives a better example of this than ‘Big’. Their set at the O2 Ritz definitely followed this same formula; the band maintaining a reserved façade throughout and abruptly ending the gig just as the crowd seemed to be at their most excited.

Whilst their show could be perceived to be complimentary of the band’s slightly mysterious and private nature, it was a shame to see a band whose success is firmly due to their fans’ devotion giving such little love back.