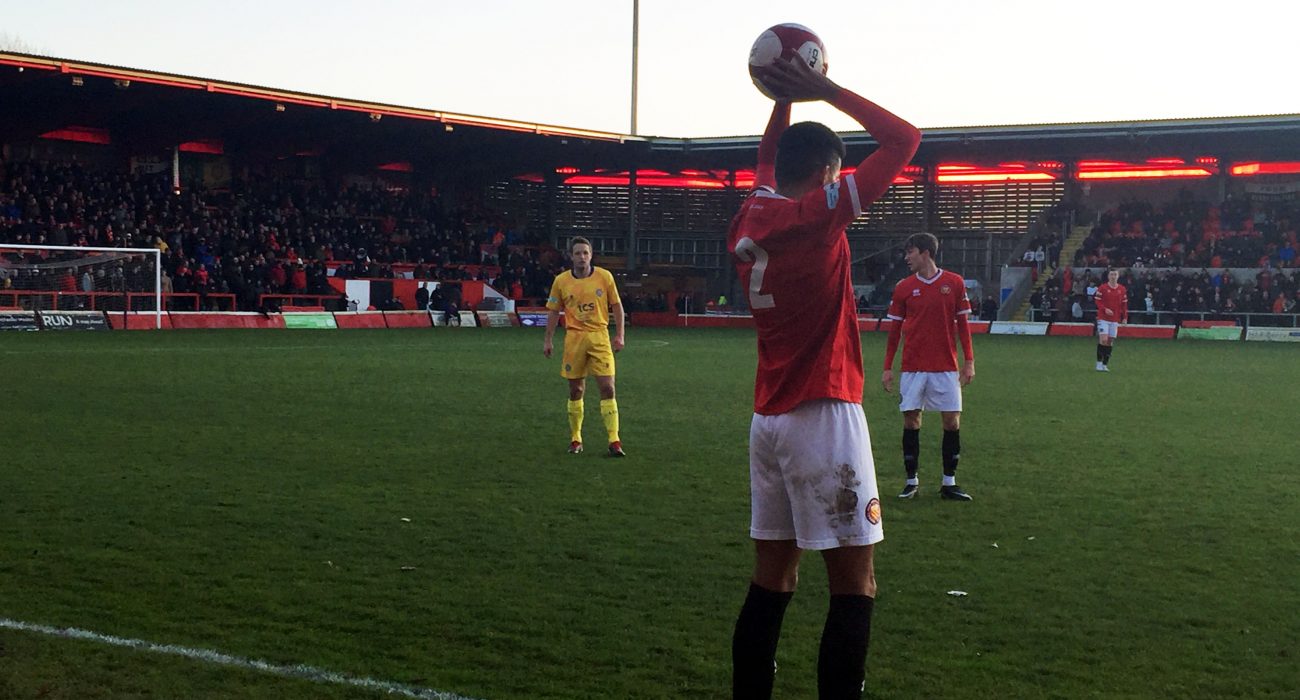 “One of the best games I’ve seen at the ground in years.” This was how one FC United fan described his team’s dramatic 3-2 win over Lancaster City, last Saturday. Behind him, the fans at Broadhurst Park could still be heard celebrating their team’s victory after they scored a 94th minute winner.

FC United went into the game as slight underdogs against a Lancaster side who currently sit in second place. However, they made a terrific start, gaining a penalty in the 6th minute after Tunde Owalabi was fouled by the Lancaster keeper while chasing a poor back pass. Paul Ennis then confidently tucked it away, going high and straight down the middle of the goal. Ennis then doubled up merely a minute later, placing the ball in the bottom right corner of the net after a good series of quick passes.

It was a dream start for FC United, but Lancaster began to try to reduce the two-goal deficit, with the first half of the game being evenly contested. However, the two-goal cushion which the team was now sat on, allowed them to play calm and confident football while off the ball and they began to catch Lancaster on the counter.

FC United went into the second half with the same dominance that they had in the first, with Owalabi’s pace making him a handful for the Lancaster defence. His efforts nearly paid off in the 62nd minute, when he had a goal ruled offside. This was not the only time that the linesman gave Lancaster a helping hand, as throughout much of the last half hour of the game a multitude of opportunities were prevented by arguably wrong decisions from the official, leading to a great deal of heckling from the home fans. Regardless of the linesman’s decisions, FC United undoubtedly squandered their chances in the second half and failed to capitalise on their dominance in the final third of the pitch.

Lancaster began to send men forward in the last 15 minutes, with a goal saving tackle from Adam Dodd serving as a warning of what was to come. A good ball across the face of the goal in the 83rd minute, which was easily tapped in by an arriving Lancaster midfielder, was only the start of Lancaster’s come back. It could have been little more than a consolation goal, as FC United hit the post a minute later. However Lancaster were able to equalise in the 86th minute from a looping header which managed to squirm under the FC United keeper.

It seemed as though FC United, who were by far the better team throughout the match, had thrown the game away in the space of five minutes. As the fans looked down at their watches to see that the four minutes of added time was nearly up, FC United once again found themselves in a good attacking position. Then a moment of magic; a looping cross from the left flank found the head of the unmarked man of the match Chris Doyle, scoring the winner in the 94th minute. This sent the 1,900 fans at Broadhurst Park into a celebratory frenzy as they were rewarded for enduring the cold weather.

Although they left it late, FC United undoubtedly deserved all three points, with manager Neil Reynolds saying after the game that his team “had too many chances not to get another” goal. The Reds now move within three points of a playoff place and face a run of three home games, including an FA trophy clash against Kettering town, who play in the league above.