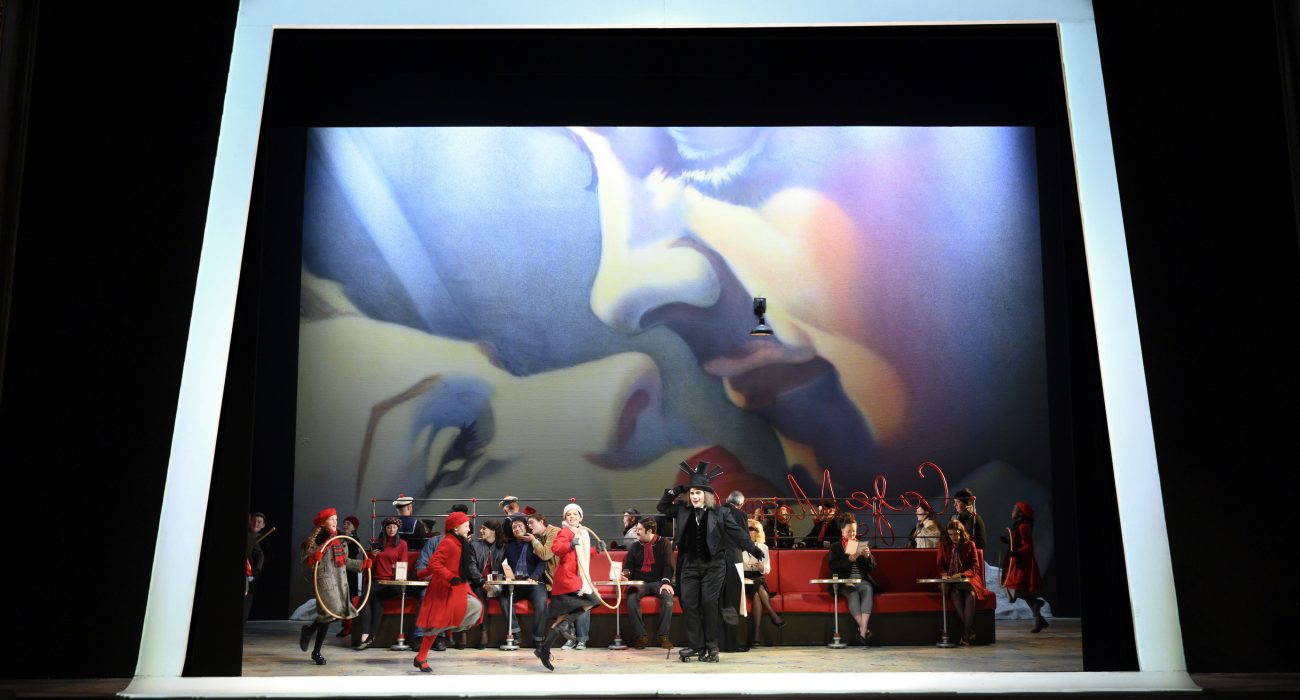 Opera North’s beautifully curated rendition of La bohème presented Puccini’s iconic work in the realm of the 1950s, ending with a standing ovation from many in the audience.

Featuring a relatively straight-forward plot for the Italian maestro, with a small but multi-faceted collection of characters, La bohème is fundamentally a love story. Set in the heart of Paris, the passionate romance between Rodolfo and Mimi is always destined into becoming a tragedy, and no performance would be complete without tears from the audience at its climax.

With the set positioned within a white frame, there was an essential emotional distancing between the audience and the performance, which was frequently and poignantly crossed with the staggering vocal achievements of those onstage. The four acts were each equally as driven and perfectly performed, allowing the audience to settle into the more approachable scenery of the ’50s with stunning costume and set design and a plethora of young cast members bolstering the busier scenes.

The portrayal of fiery and multi-dimensional Musetta was flawless, positioned beautifully within the context of the production. The contrast between the two central female characters within Puccini’s iconic work was directed with a precision that reached his climax in the painful final scenes, where Musetta’s deeply kind character is seen to overcome the audience’s perhaps more flawed perception of her.

In a stand-out performance by Lauren Fagan as Mimi, I found myself drawn into the world of the Opera for the first time as a deeply emotional journey where real bonds are developed between audience and character. My only disappointment with this performance was the direction of Mimi and Rodolpho in the key Operatic duet O soave fanciulla, where the sheer passion of their pairing is staggeringly conveyed to those watching. In a moment where the firm bond between the characters should be self-evident, the direction meant they sung not to each other but to the audience. This destroyed the intimacy of an otherwise deeply moving movement.

Although there is some controversy surrounding die-hard operatic fans about the presence of translation beside performances, I found it to be an imperative aid to the opening of this theatrical genre to new audiences. It is essential that the opera is distanced from the arguably intimidating persona it currently embodies if it is to survive in a world of high-paced musicals.

Overall, this was an impressive and deeply engaging production of Puccini’s La bohème. It successfully presented complex and multi-faceted characters through both excellent direction and dazzling vocal arrangements. Despite a lack of convincing chemistry between the two central leads, I would thoroughly recommend both Opera North and this production. Anyone who says that opera has no place in the modern world is thoroughly mistaken; the emotion conveyed in this performance is the closest I have ever felt to the deeply moving and intimate bond between any two people, real or otherwise.