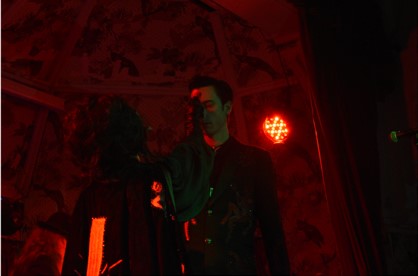 Deaf Institute saw an out-of-the-ordinary headliner with ‘Satanic doo-wop’ duo Twin Temples headlining a show supported by The Violent Hearts as part of their UK tour.

The Violent Hearts opened the show with The Clash-inspired rock that was technically excellent, yet it seemed much of the crowd were more interested in the more religious aspects to come rather than the support band themselves.

Although it is a rather hard task to find a band fitting to support Satanist rock seemingly straight out of the sixties, I’ve no criticisms of The Violent Hearts; they had a solid look and a decent stage presence. The only thing I could comment on is that for a band with just two songs on major streaming sites, each song could be introduced more explicitly to help new listeners pick out their favourite tracks.

Twin Temples took to the stage, as expected, bathed in red light, carrying chalices and other Satanist ornaments. At first, I was excited to see how they would incorporate this theme into their music and if they could deliver a truly new sound in an aged genre. However, I was sorely disappointed when the band began to play. Although again, the tracks were performed technically excellently, they appeared to be completely regular ‘Doo-wop’ songs that could have been taken straight from the sixties.

It was often impossible to tell where the Satanism came into their music, with most of their individuality as a band coming from simply changing the name of an average woman in a swinging love song to that of Lucifer.

Whilst the music was enjoyable, the stage interaction was often not. The husband and wife duo performed several Satanist rituals, including a dark baptism, in between songs. Although this broke up the set, these breaks often felt too long and at times simply bizarre. Yet, the crowd lapped up each and every pause. Perhaps this view comes simply from me not being a Satanist or particularly enthralled by religion at all, but in any case it is unlikely your average music fan would be able to understand, let alone appreciate, this odd stage direction.

With this incoherency between the stage action, outfits and music, Twin Temples don’t feel as though they are putting a new spin on an aging genre: rather simply selling a gimmick that fans of the alternative enjoy. If you are a fan of ‘Doo-wop,’ they are technically brilliant, especially the backing band – as long as you can stomach the stage shows and fake blood everywhere.

Overall, a disappointing set saved largely by the support act, The Violent Hearts; a band worth looking out for with a full debut album on the way. Yet it was one that still left grown adults barging through swathes of people to be anointed with crucifixes covered in fake blood. 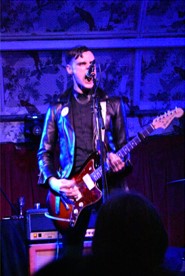