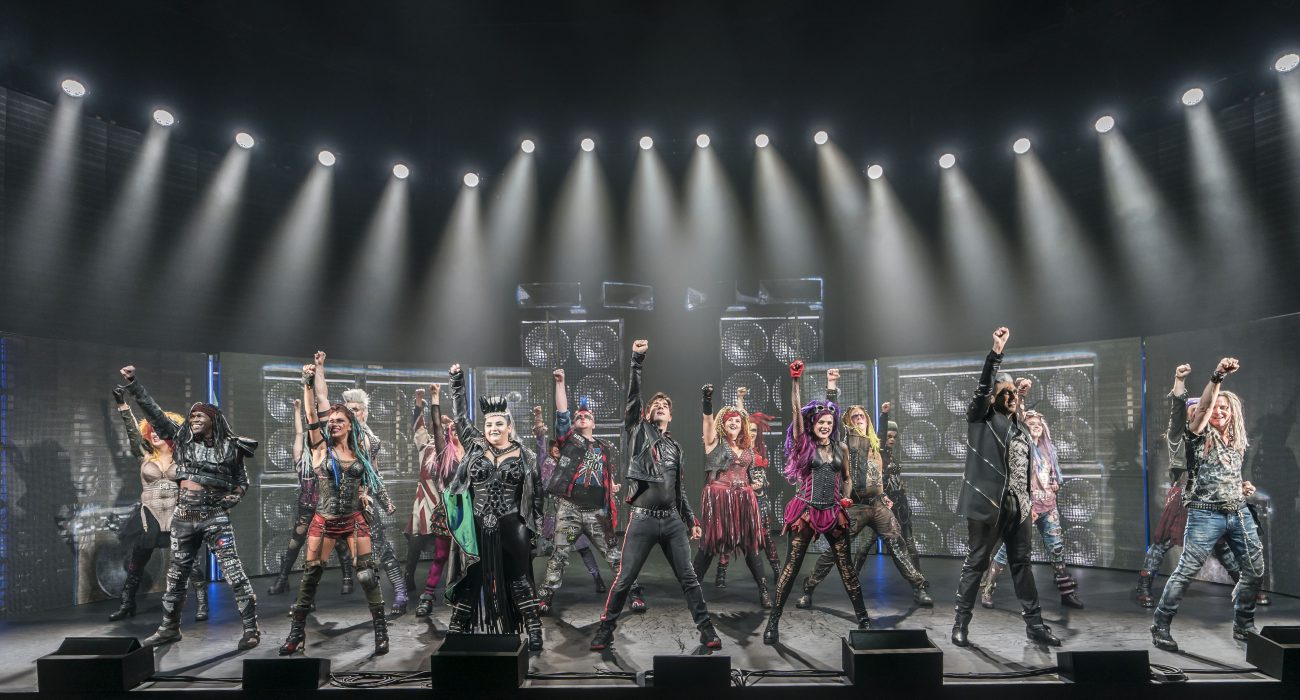 Review: We Will Rock You

In the last year, the work, life and experience of the monumental band, Queen have barely left our screens, stages and societal focus across a multitude of platforms. The band’s history is both as controversial as it is creative, although this is often overlooked in pursuit of a jukebox portrayal and focus on central figure and band frontman, Freddie Mercury.

From Queen and Ben Elton, a University of Manchester alumnus, We Will Rock You takes on the story with complete comic book appeal through their music – perhaps rushing headlong into a varied, complex discography and making some astoundingly ambitious attempts to string together a cohesive storyline.

In this jukebox production, we receive an updated creation in form of myth and legend, with protagonist, Galileo Figaro (Ian McIntosh) conjured directly from Queen’s famous Bohemian Rhapsody. Alongside his clever female counterpart, Scaramouche (Elena Skye), they must overcome a world of Gaga boys and girls to bring back rock music to its ‘rightful’ live state.

Unfortunately, the content and creative development of the musical is a glossy overlaying of imagery and iconography that take each of the tracks and barely scrapes the surface of their often deeply moving and personal content. For all, the musical has value as an entertaining display of creative costume, colour and some incredible vocal talents, but I felt a distinct lack of investment in the characters and found that crucial, climatic scenes just did not have the gravity they should possess.

The dialogue is quite stilted throughout, and although there is strong direction in regards to creating a more accessible and engaging voice – many of the characters still fall foul of lazy stereotypes that trap them in an early noughties bubble.

For example, The Killer Queen (Jenny O’Leary) has the potential to be an LGBTQI+ icon in her dress sense and use of web-based vernacular. If she was allowed a more sassy, snappy persona through new, inclusive writing, there might be some adaptability about her otherwise surprisingly subdued characterisation. I cannot help but find her entire performance puzzling – the voice and power is there but she lacks the leadership that some Queens have previously expressed in the role. The role needs updating more sufficiently, which is an issue that runs throughout for most of the characters.

A standout performance was undeniably found in Adam Strong’s Khashoggi, who had a wit and terrifically evil charm about his character. This was equally matched by a fantastic countertenor range that created momentary pockets of pin-drop silence – outstanding to observe and a credit to him throughout his thoroughly energetic portrayal.

The searing sonic sounds are, of course, the main draw to this production, and I cannot fault the immensely talented live band. They completely give their all throughout the evening from radically imagined riffs to explosive percussion – truly some of the best rock band musicians I have encountered in the last year.

As a touring production, the use of screens is expected, and the company interacted with the screens with impressive ease and clever use of the spatial structures. For example, many of the screen designs featured depth and movement of space that stretch beyond a traditional stage space. However, it is still exciting to have the tangible, real set pieces with the onstage actor, so it seemed sad that there were significantly fewer moments that were set in the real world.

WWRY the touring musical is truly a showcase of Queen’s greatest hits and provides their fans with the perfect production to let their hair down – however, as a standalone production, it does not have a kind of magic in its storyline.

We Will Rock You continues its UK tour throughout the year.