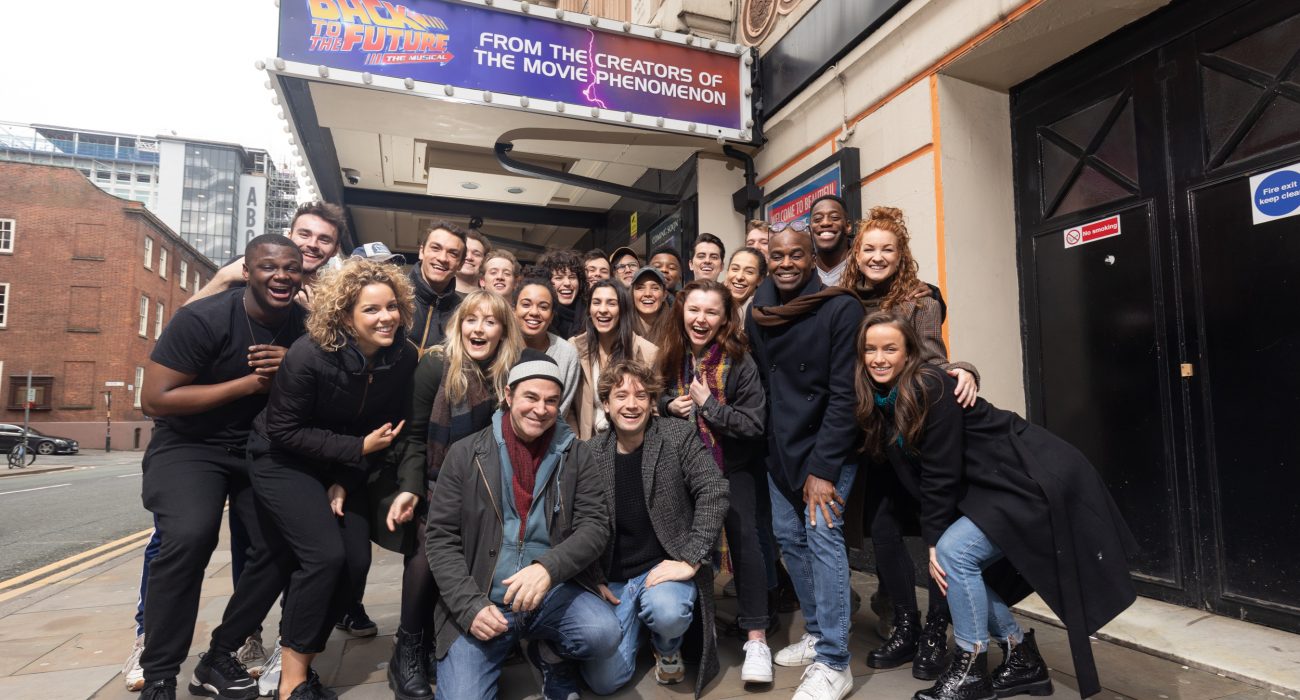 Following on from the launch event of Back to the Future the musical, held at Albert Hall last October, a press junket was held at The Ivy this week to make some further announcements.

Joining the previously announced 2 x Tony winner Roger Bart as Doc Brown, Olly Dobson as Marty McFly, Hugh Coles as George McFly, Rosanna Hyland as Lorraine Baines and The Voice UK‘s Cedric Neal as Goldie Wilson, will be Aidan Cutler as Biff, who, like Coles, will be making his professional stage debut.

Coles and Hyland, alongside Neal and Cutler, were also at the junket, so it was nice to catch-up with them and see how things are going now, especially as the premiere is only days away.

Also at the junket were producer Colin Ingram (who has previously produced the stage-musical adaptations of Ghost and Grease) and co-writer of the original film, Bob Gale, both of whom had been at the launch event. I was lucky enough to chat to Gale at both events.

Ingram revealed that tickets will be as cheap as £19.55 (but they are actually as cheap as £13 on ATG), an intentional decision that fans of the film will surely appreciate. Big fans with money, however, might be glad to pay the top-priced £94 to see their favourite film onstage.

Ingram also interviewed Bob and the cast, who were joined by 6 x Grammy winner Glen Ballard and 2 x Grammy and 2 x Emmy winner Alan Silvestri, who are responsible for the show’s music; the latter worked on the music for the original film series.

My interview with Silvestri, Ballard and Gale can be found here.

After interviewing Coles and Hyland back in October, I caught back up with them to see how things are going.

The cast have been given more freedom than is often the case in musicals. But if Gale’s word is not enough, you can take it from Coles and Hyland too; both remarked that creating this musical has been a cooperative experience, with even the director, John Rando, asking the cast what they think.

Hyland say it was “cool” to get to leave her stamp on something brand-new, in whatever small way she can. I brought up my interview with the cast of & Juliet, when established actors told me it was incredible to be a part of a new show and create a character.

Of course, these roles have already been played; Hyland feels responsible for taking care of the role of Lorraine, but she is also being true to herself in the recreation of this iconic role.

After workshopping for so long, Coles and Hyland are finding it wonderful working with a set, props and costumes. Hyland remarked that all of the character work starts to come together because you start to feel like your character, with Cole saying hard work “pays off” because you get to be “in the world”.

But it will also be immersive for us audience-members: having watched tech rehearsals, Cole remarked that you get to “live in Hill Valley”. Hyland compared it to going to New York for the first time and meeting a celebrity, and whilst she’s now part of ‘it’, she’s still star-struck by it.

Drawing on the incredible success of & Juliet, which also debuted in Manchester, and having been told how ground-breaking BTTF is going to be, I asked Cole and Hyland what it feels like to possibly be part of history.

But neither of them have taken that in; they are taking it day-by-day, but acknowledged it is amazing to be part of something so incredible, alongside a world-class crew.

I asked the pair what it will be like for their parents to watch their children in one of the most iconic films of their generation. Coles, who grew up attending the theatre, likes the circularity of now bringing his parents to the theatre to watch him.

Hyland teased that the costumes and wigs will be “true to the film,” but when I asked about the production value of the show, she remarked that I just have to come and see it.

And that I will!

Back to the Future runs at the Opera House from the 20th of February to the 17th of May.