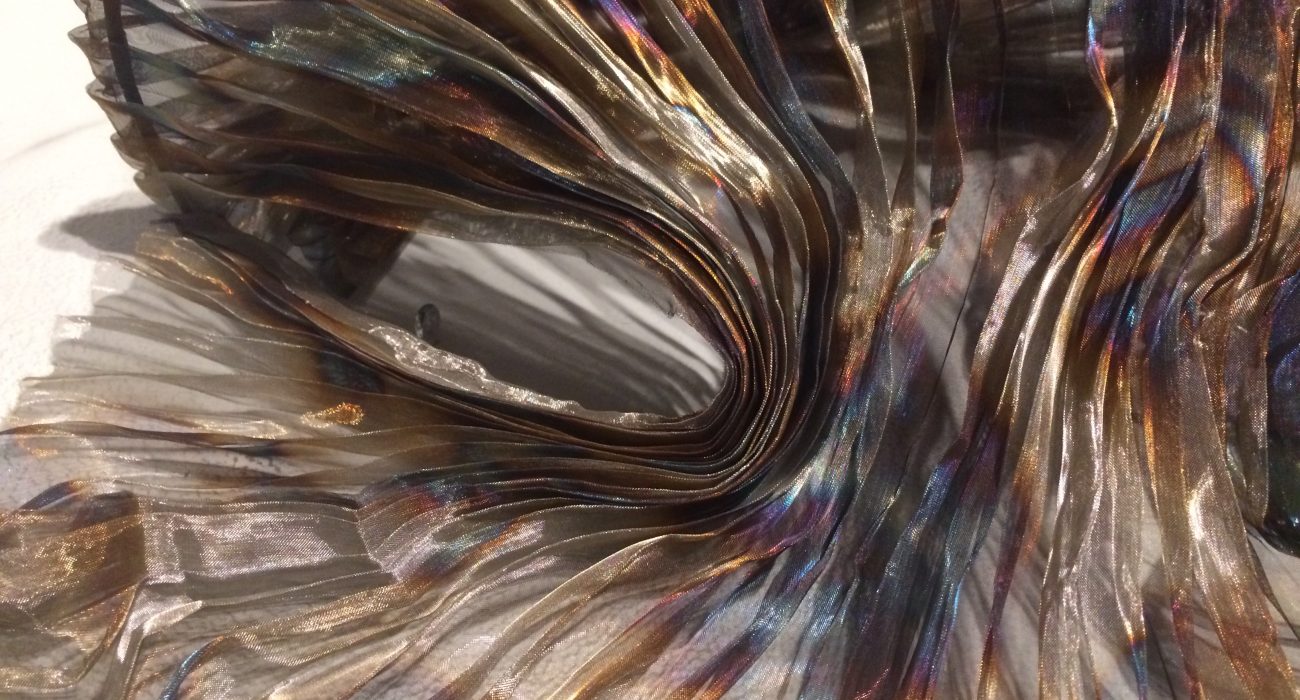 The background of the show is deceptively simple. A black screen, where twisting strands of neon blue light flicker and dance like bioluminescence. As the models drift up and down the runway, the curved lines appear to form the shape of a double helix, which speaks to the central theme of this collection; the mutability of life.

Herpen’s use of fabric is nothing short of masterful. It stiffens into spines that protrude from a model’s shoulders like lionfish. It seems to warp the body’s skeleton into something unfamiliar, as it curves out from her elbow down below her knee. A dress billows out from a model’s shoulders, drowning her in marbled silks, so light and supple that it moves like a jellyfish.

The shapes and structures of Herpen’s garments are stranger and more wonderful than the creatures you’d find flitting about in Blue Planet. Material is rucked and caught up in impossible ways that create bubbles of volume, or else flattened onto mesh frameworks that undulate and flex in the air.

There is no laziness in terms of colour, either. As the show continues, the tone becomes darker and more menacing. The clothes are blanched to bone-white like they have never seen the sun, or bloom with deep, alarming reds and blacks, like a startled sea creature. On one of the looks, the inky fabric fades to the lightest of translucent blues, and then into a nude mesh, almost as if it has grown organically from the model’s own shoulders.

It is a mark of Herpen’s skill that this collection manages to feel completely independent to McQueen’s Plato’s Atlantis. Where McQueen looked to the future, Herpen appears to delve into the past, into the primordial. There is a gently alien tone to the whole show which is less threatening than Plato’s Atlantis, with its preoccupation with exoskeletons and scales.

It is interesting to examine the collection, particularly its resembling blue lightning, in relation to the concept of paleolightning. The groundbreaking Miller-Urey experiment of 1952 theorised that the catalyst for life on earth may well have been a lightning strike. A recreation of the event, with some of the elements thought to be present at that time, produced some of the key components essential for living organisms. Whatever Herpen’s intentions, this is fashion at its best, investigative yet subtle, thoughtful while remaining accessible.