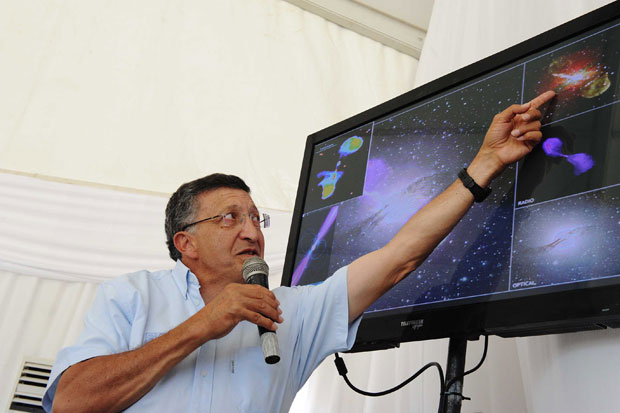 This year’s annual Fanaroff lecture was hosted by guest speaker, Dr Marga Gual Soler, an assistant research professor at Arizona State University, and science diplomat to the University of Manchester.

The annual event takes place to recognise the extensive work of Dr Bernie Fanaroff in the unions in South Africa, in the government and his advocacy in championing the square kilometre array (SKA). The lecture took place in the Samuel Alexander building on campus, followed by a private dinner served in Manchester Museum in the shadow of a dinosaur replica.

In recognition of his work, Dr Bernie Fanaroff has been the recipient of many awards during his career as an astronomer and a science advocate, including the Silver Order of Mapungubwe. This award was granted by the President of South Africa for his excellent contribution to astronomy within the country.

The Square Kilometre Array (SKA) project is an extensive radio telescope, conceived in the 1990s. Built in the southern hemisphere, cores are placed in South Africa and across Australia with the headquarters of this international collaboration at Jodrell Bank Observatory in South Manchester.

Dr Bernie Fanaroff introduced Dr Soler at Wednesday’s event to an audience of science academics, science communicators and students. Dr Soler completed a PhD in Molecular Biology at the University of Queensland in Australia before joining the United Nations (UN) with the ambition of “bridging the worlds of science and international policy.”

Dr Soler began her talk by describing her first encounter at an astronomy outreach event in a local community in Namibia in 2017. Dr Fanaroff had used art to describe, how as a globe we share the sky and through science collaboration, thus we are able to access data from around the world to form complete images of the sky. Dr Soler carried on to reflect upon many of the projects she had worked on globally, in places such as South America, the EU and Antarctica.

Science is used as a common language to bring countries together in collaboration. Science diplomacy is a new, exciting field, with papers only emerging from January of this year. As part of Dr Soler’s position as assistant research professor, she took the initiative to design a new science diplomacy education curriculum to inspire younger generations to enter this field.

Finally, Dr Soler finished off by speaking about the issues facing science diplomacy. The denial and ignorance of governments and organisations pose an increasing problem to her work. In addition to this, there is a lack of diversity in the field of science and science diplomacy – an issue the whole community is currently attempting to address.

The Fanaroff lecture had a unique theme, highlighting the importance of international science communication, especially with the ongoing threat of climate change to our planet.