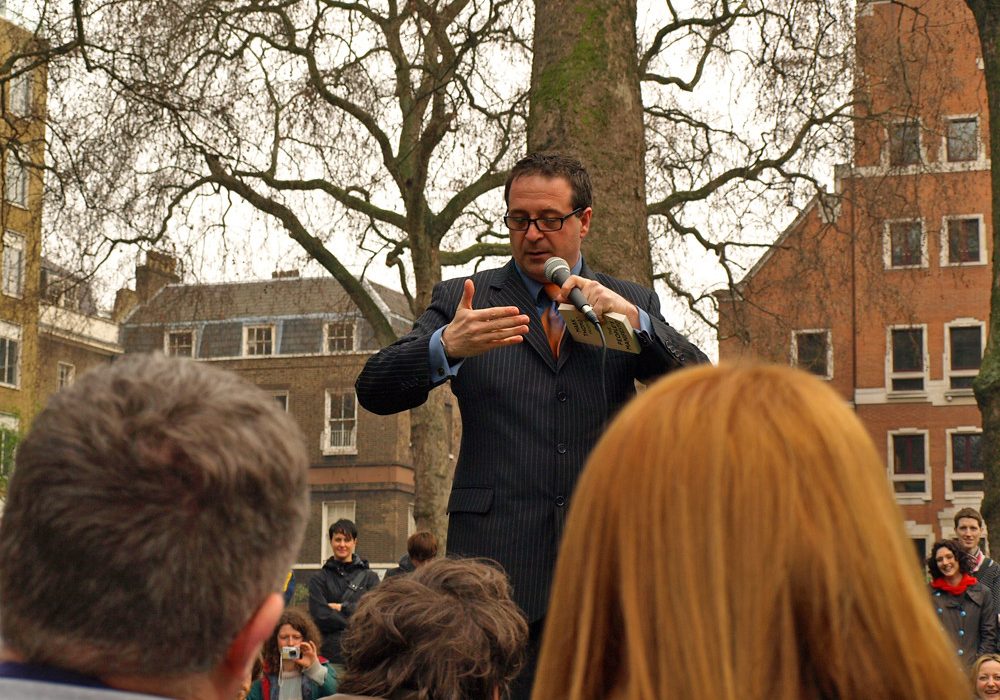 In Conversation with Mark Thomas

A lot of people have come to bemoan comedy as ‘too political’ political and overly preachy in recent years. Mark Thomas has a simple answer to this: “why the f*ck should I care?”

It’s a bold statement that could come across as nihilistic to the unaware, but Thomas, with his unique brand of comedy-activism, is upsetting exactly the right people. So much so that he’s earned himself a spot on the domestic extremist list.

His latest tour, 50 Things About Us, has just kicked off and sees Thomas playing an extraordinary number of venues from Aldershot to Winchester to Leicester Square. Far from a regular standup show that might act as a couple hours of escapism for its audience, the 50 Things tour will ask some big questions about the very fabric of our nation and who we think we are. Thomas promises ‘a show about money, history, songs, gongs, wigs, unicorns, guns, bungs, sods of soil and rich f*ckers.’

And it’s those ‘rich f*ckers’ that Thomas has spent so much of his career trying to get the best of. Approaching the arts from a multimedia standpoint, anti-establishment politics have been at the heart of much of what Thomas has produced over his career that now spans four decades. While some may feel disheartened after so long trying to effect change, Thomas simply says he does what he does “because it’s the right thing to do”, and “it’s the thing that I’m good at”.

That sense of duty came through during a lot of our conversation. Just as Thomas uses his wide array of talents well – with him producing any kind of media one could think of over the years – he believes in the ability of anyone to contribute to society, no matter how small. “People get on and do things”, he quite frankly tells me, in answer to a question about how individuals can best help to change our society.

As a fervent supporter of grassroots movements, Thomas has great faith in their power to inspire people in both art and politics, despite “no idea” where our country’s future political influences are going to come from. He believes the political sentiment within art never goes away, and smaller, community run spaces are the way forward. In the meantime, larger institutions such as the Tate, which Thomas dismissed as a “middle-class Legoland”, “can just get out of the way.”

Instead, more community focused spaces should be prioritised and supported. Thomas praised HOME in Manchester as one such example, also talking about The Foundry in London Bridge, a space that allows anyone to exhibit providing they have a large enough body of work and give one piece to the venue. Such spaces allow people without the instant name recognition needed to ensure mass ticket sales can still have their work seen and their voices heard.

This support for grassroots movements extends very much to politics. Thomas sees our current situation as an “uphill struggle against someone happy to play with race in a way that is really disturbing,” and forsees a very difficult five years ahead. But this uphill struggle is “part of the job” and not something Thomas is alien to.

The people that “get on and do things,” and continue their activism around issues like poverty and the climate, got a lot of praise from Thomas, but he believes there is still much more to be done, and much more that can be done by just about anyone.

“People take different approaches, based on how they live and the kind of people they are,” he says. This very personal, everyman approach to activism is what makes Thomas so popular and relatable to those who consume his content.

Though he himself is not afraid to make moves that most would or could not – such as walking the entire Israeli Separation Border, or leading a campaign against a hydroelectric dam in Turkey – the ‘little guy’, or those without power, are always at the heart of everything he does.

From an early age, whether attending private school with a scholarship, or joining the miners’ strikes in the North, Thomas has despised “those who bully others in a weaker position”, describing those who abuse their power as “morally reprehensible”. This staunch belief in empowering people to right the seemingly insurmountable wrongs of society is what keeps drawing people to his odd brand of charisma, that’s laced with a perfect amount of cynicism.

While being placed on a Domestic Extremist watch list would alarm most, Thomas still had much more to say about the issue of corporate surveillance. There is much to be said for how readily we sell away our privacy to companies like Google, who sell it on to anyone with a big enough wallet.

Thomas also warned about the rapid “privatization of space and private police forces” as we too often focus on worries of an authoritarian state, while those companies we empower with our rampant spending quietly grow more and more influential in aspects of our day to day life.

A man like Mark Thomas is full of wisdom, warnings and musings to make you reevaluate your place in our ridiculously complicated society. Get even more of his insight into our world at his upcoming tour, 50 Things About Us, or scour the internet to find some of his vast array of works across equally vast mediums.