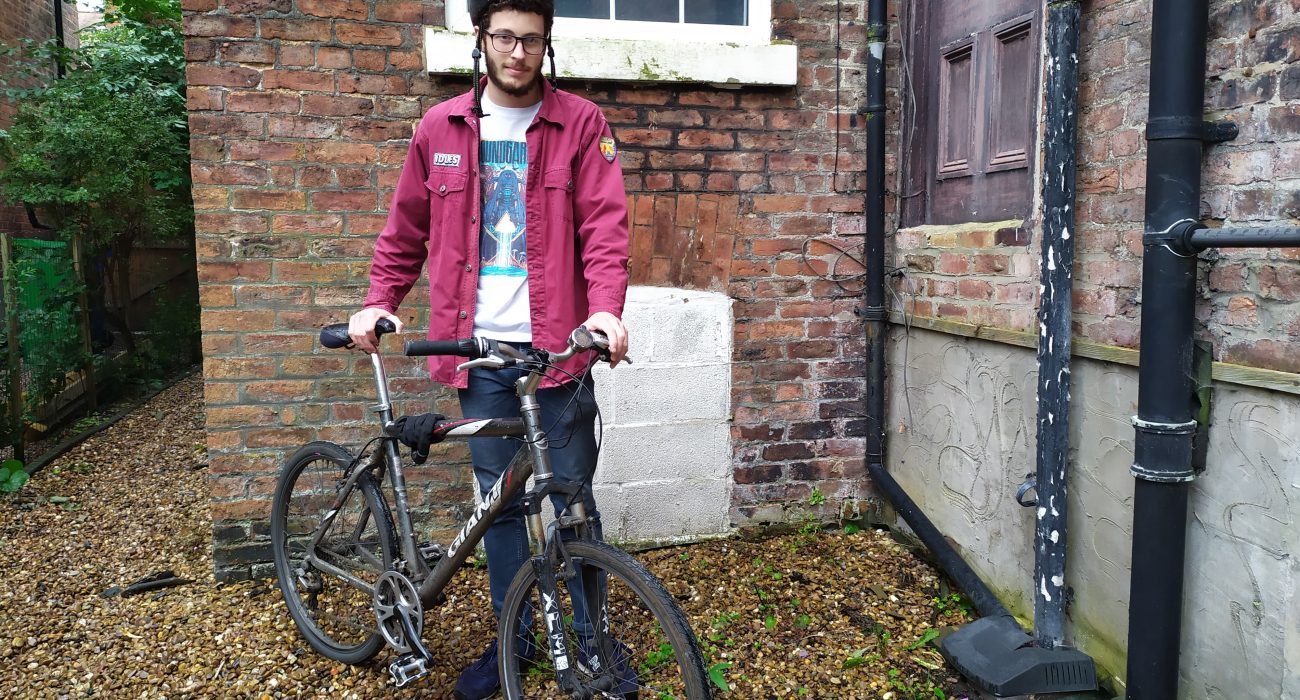 When I started experiencing Covid-19 symptoms – a new prolonged cough and flu symptoms – I filled out the Covid-19 self-assessment form on the NHS website.

I was met with the chilling message: You must self isolate.

I informed my housemates and booked a test for the following morning. The GOV.UK webpage helpfully informed me that a slot was available at 10:30 am at my nearest walk-in centre: Denmark Road Sports Hall in Moss Side, Manchester.

I set off on the 2-mile bike ride at 10 the next morning, without leaving enough time for breakfast. During the booking process, numerous warnings of low availability had left me keen to make it on time. Besides, I had the rest of the day to eat, sleep, and do a whole lot of nothing whilst self-isolating in my room.

I arrived at Denmark Road Sports Hall, and was immediately baffled by the lack of an obvious entrance.

The main door was shuttered, and all the lights were off. I did a couple of loops of the block searching for any signs of life, but to no avail. With a minute to go until my scheduled appointment, I tried the entrance to one of the sports grounds on the side of the complex but found only rubbish bins behind the strangely unlocked gate.

It was at this moment that I realised I had an audience. An elderly gentleman and two young men, likely students, were watching my frantic search for a test centre from the other side of the street. As they too were wearing masks and looking very cautious I called out to ask them if they were also looking for the test centre.

They were. We had all booked tests the day before and had been directed via text and email from the government to make our way to this lifeless sports centre. There was no other excuse for leaving the house with symptoms. As I had a bike I investigated the school across the park, led astray by the astro turf’s promises of a sports centre. When I returned to my fellow isolators our numbers had swelled.

My appointment time had been and gone but plenty more people were arriving for their own tests. At one point there were maybe one to two dozen people with Covid-19 symptoms waiting outside the sports centre, either on the pavement or in their cars. After unsuccessfully looking for a phone number (or any details at all) for the Denmark Road test centre, I called 119, the new NHS phone number for people looking to book texts.

After 5-10 minutes on hold, I got through to an operator. She seemed flustered, and told me that the call that she was on to another man had dropped unexpectedly, and the system had immediately put me on the end of her phone. I waited as she finished whatever she was doing for the previous caller. She had no way of contacting him to let him know that his query had been processed.

As I explained the situation on Denmark Road she tried to escalate my concerns to her supervisor, but was herself put in a queue with 9 other helpline workers. She said candidly that she could be in that queue all day, and instead sent off two emails in full caps to try to bring the situation to the attention of her superiors.

People were still arriving in cars, taxis and by foot – only to be greeted by me and others telling them the centre was closed. Many gave up and went home, and I do wonder whether they will bother with the hassle of isolating for another full day and booking a follow-up appointment.

Whilst I was there, from 10:20 until 11:45, I estimate that roughly 30 people arrived at the centre to be met with a closed door, like me. The phone operator who stuck with me for 30 minutes eventually consoled me with the information that there was another site at Belle Vue, only a 20-minute cycle away. Another man at Denmark Road, also on a call to 119, was told that if he presented his appointment QR code at any other centre he would be given a test. Armed with this information, I made my way to Belle Vue.

I met two men at Belle Vue who I recognised from Denmark Road, so we made our way to the entrance. Two security guards met us. We informed them of our situation and they told us Belle Vue wasn’t ready to open until 2 pm, and even that might have been a difficult deadline to reach as the staff there were being trained as we spoke.

Despite their friendliness, they made no attempt to inform anyone that people were being sent to a closed test centre at Denmark Road, and they told us that we could either wait 2 hours for the planned opening of the site, or make our way to another centre. Whilst we were there a pregnant woman arrived. She had taken a bus to get to Belle Vue from Denmark Road, and said she couldn’t afford to get another bus to another centre. The security gave her a fold-out chair to wait the two hours on the pavement.

I booked myself a slot for 1 pm at the Ancoats testing site in central Manchester and set off from Belle Vue at 12.20. I never received any word about my missed appointment that morning. I finally found the Ancoats site tucked away just off the canal. It was incredibly easy to miss if you were to come from the wrong direction, as I had, and I almost walked into Ancoats Primary Care Unit by mistake. I had symptoms. This was no time to be on a wild goose chase, and certainly no time to be wandering into NHS buildings to ask for directions.

I finally got my test at the Ancoats walk-in site, and it was a mild disappointment given the morning of build-up. The staff there had no time to hear of my ordeal that morning, and shrugged off my concern that dozens of people were being wrongly sent to a closed site.

I made my way back home, knackered and incredibly angry. Throughout the day the only remotely official person that showed any concern for the situation was the 119 call operator – and she was unable to do anything about it. I cycled 13 miles and visited 3 test centres in 3.5 hours just to self-administer 1 test. I dread to think what I would have done had my condition or situation been worse.

I visited Denmark road on the 5th of September and it supposedly opened on the 4th. As of the 10th of September, I still haven’t received any explanation for the events I went through.

Robbie Beale has kindly agreed to let The Mancunion republish this article. He has since tested negative for Covid-19.