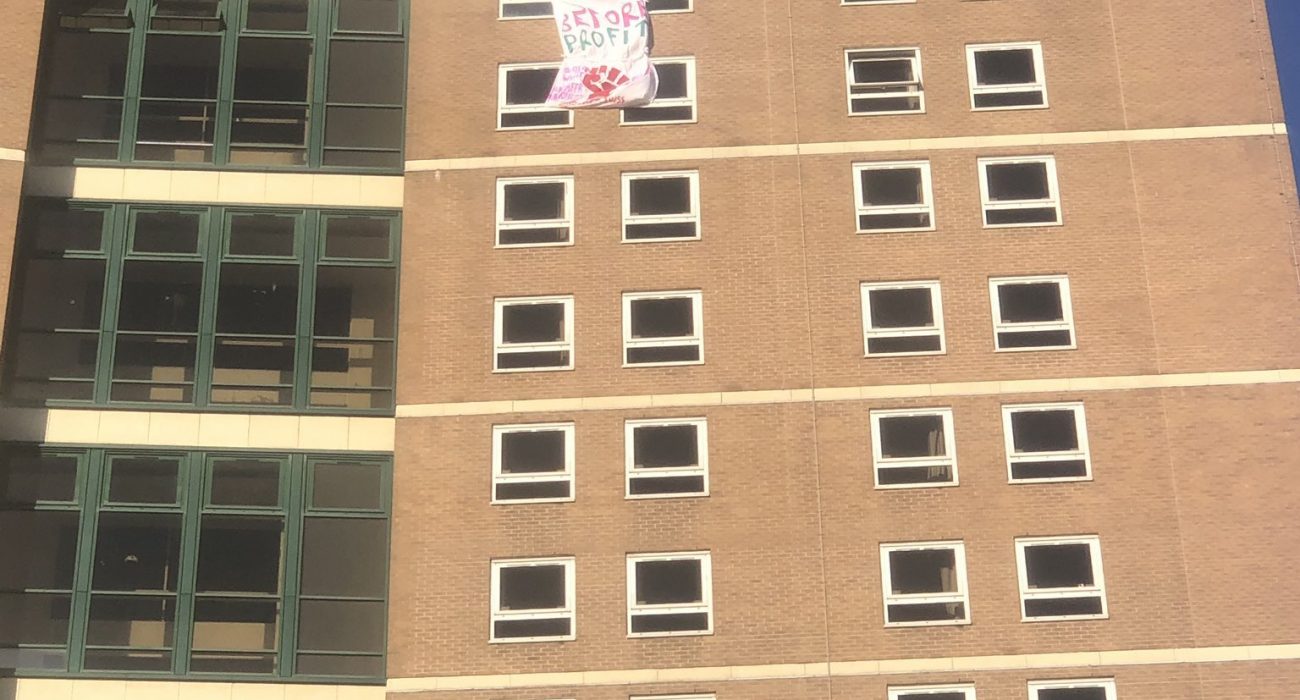 Protestors hung a banner from the windows of the top floor stating "This building is occupied" Photo: @TheMancunion

The format of an outdoor protest organised in solidarity with the Owens Park Tower occupiers has been “reformed” after the police reportedly threatened to arrest students.

The gathering was supposed to take place tonight at 8 pm on Fallowfield campus but SAFER, the student group campaigning for “academic, financial and physical safety” during the pandemic, urged students to protest from their rooms instead.

SAFER said Greater Manchester Police had threatened to arrest and fine students who attended the protest.

Posting on Facebook, the group wrote: “The SAFER committee received a call from the police this morning threatening arrests and fines for the students attending the protest tonight.

“In the interest of student safety, which is our utmost priority, we have reformed the format of tonight’s protest. We do not want to put any students at risk of arrest and financial loss, especially the members of our community who are the more vulnerable to potential arrest.

“We are asking that you remain indoors to protest. The SAFER committee WILL protest tonight on behalf of all students, but you need to help us by staying indoors, staying safe, and making lots of noise to show your support.

“Make signs, posters, hand them out of your windows. Blast music, bang lots and pans. Do insta lives, stories, and posts using our hashtag #safernow so noise can be made.”

SAFER said the authorities had threatened the students because “they want us to back down and lose momentum”.

Earlier on today, members of the UoM Rent Strike began an occupation of Owens Park tower, demanding the university meet the following demands:

The group dropped banners from the top of the tower block which read “this is an occupied building”.

Greater Manchester Police said they were aware of the planned protest and had encouraged organisers to “do the right thing”.

A spokesperson said: “We were made aware of a planned protest in Fallowfield later today and have been working alongside partners at the University of Manchester and Manchester City Council to encourage the organisers to do the right thing to ensure their own safety and the safety of the wider community.

“Thankfully the organisers of the event engaged with officers and have agreed to hold the event in a safe way as to protect themselves and the wider public.

“We continue to follow the national principle of the 4 Es approach and work to engage, explain and encourage before resorting to enforcement where there are blatant breaches of the legislation.”

A University of Manchester spokesperson said: “We are aware of the protest by a handful of students in an empty residential building. We have made it clear to them that they shouldn’t be there and that they may also be in contravention of current national Health Protection Regulations.

“We are already engaging with elected Students’ Union representatives about many of the issues being highlighted by the protestors. The University is fully committed to freedom of expression.”