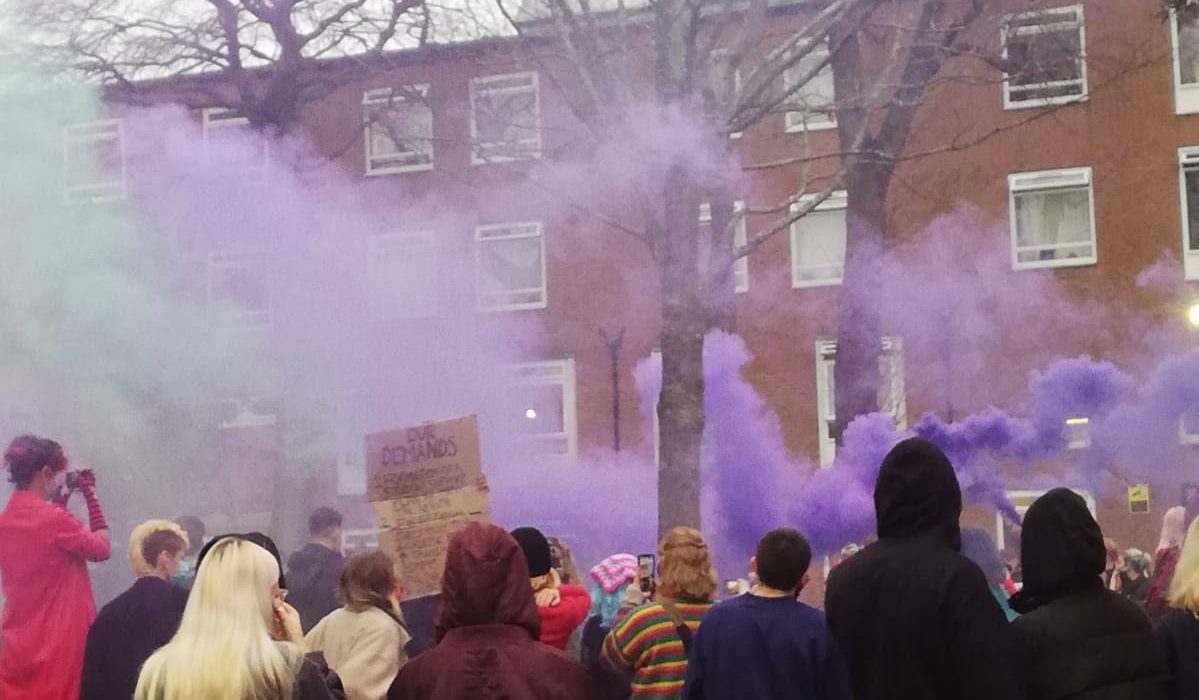 More than two hundred students gathered in Owens Park on Sunday to protest against the “unfair” treatment they have received from the University of Manchester.

The socially-distanced demonstration, organised by the student campaign group S.A.F.E.R., which fights for “academic, financial and physical safety” during the pandemic, had been risk-assessed prior to starting, and all attendees were encouraged to wear masks.

Multiple speakers, the vast majority of them women, took to the stage and aired grievances against the University of Manchester, while students looked on carrying signs reading ‘9k 4 what?’ and ‘U.o.Me’. 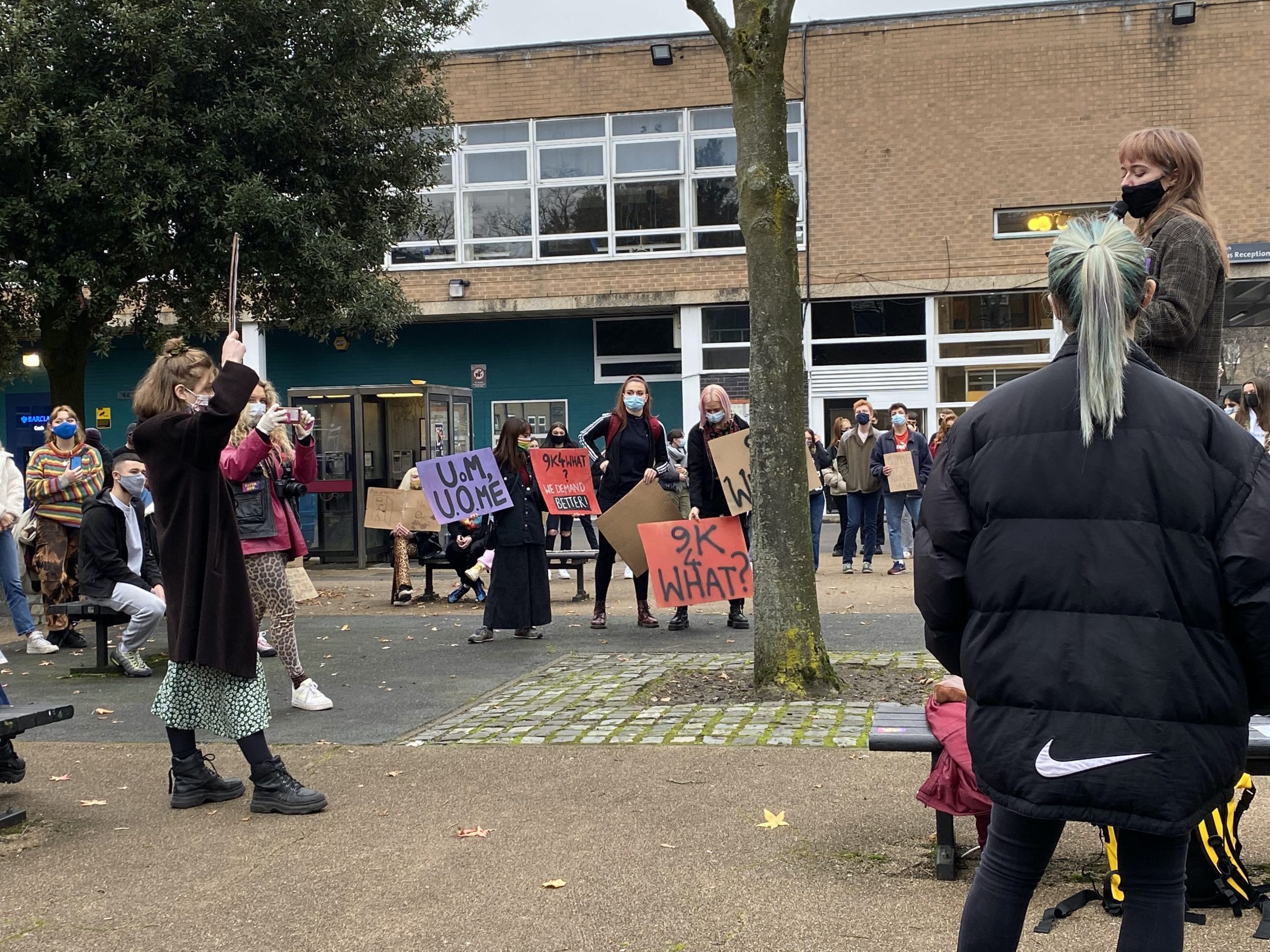 Earlier this week, Owens Park residents tore down 6ft high metal fences that had been erected by the University with no prior notice.

Bosses insisted that students who live on-site would be able to come and go freely, but the incident prompted a widespread backlash.

Manchester University Vice-Chancellor, Professor Dame Nancy Rothwell, apologised for any distress caused by the decision to erect the fences, and said an enquiry would be established to determine exactly what happened. 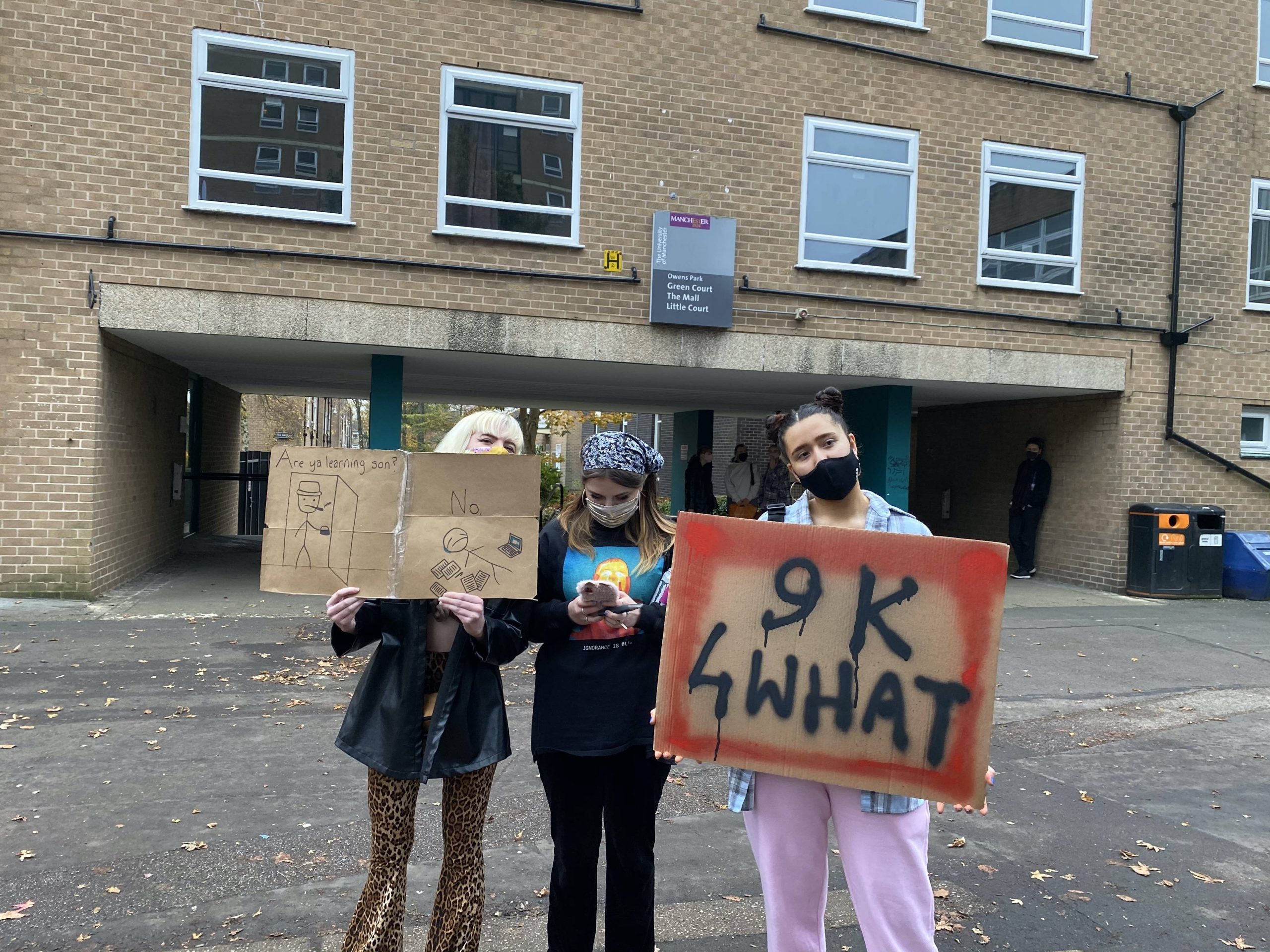 Before Today’s protest, S.A.F.E.R. called for those isolating to “listen and make noise from your windows” and for those attending to “protest safely and responsibly, adhere to social distancing and wear a mask”.

Cathy Wippell, co-president of S.A.F.E.R, was met with enthusiasm as she called for better transparency from the University, and increased communications between students and management.

She also called for the University of Manchester to respond to S.A.F.E.R’s requests for a sit-down meeting.

“This is a callout now,” she said. “University of Manchester, hello! S.A.F.E.R. would like to get in contact with you, and we would like to talk about how unfairly students have been treated, and how the hell you’re going to fix up for us.”

“We would like to talk about how unfairly students have been treated, and how the hell you’re going to fix up for us.

This focus on safety was further highlighted by speakers from the group, who reminded students during their speeches that mask-wearing and social distancing was a must. The vast majority of attendees adhered to these rules throughout the two-hour protest, making sure to stand in household groups away from others.

Throughout the protest, representatives of S.A.F.E.R. handed out leaflets informing protestors of their rights, and reminded attendees of the COVID-19 regulations. 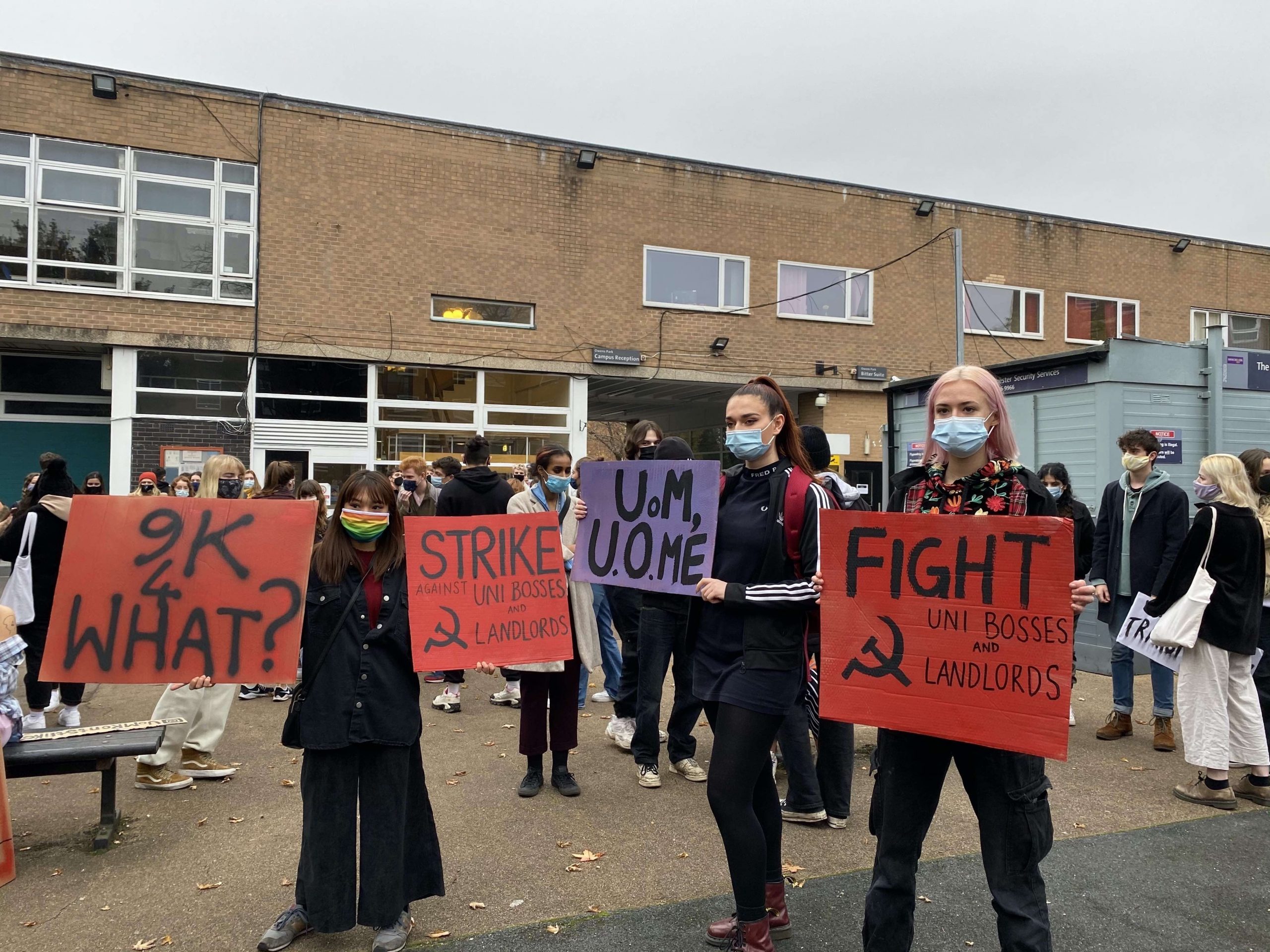 As the protest went on, The Mancunion interviewed various attendees about their experience this semester, and why they had joined the protest.

Laura and Hannah of ‘9k 4 What’ described how angry they were at being “scapegoated and blamed for the pandemic”.

“Students have been trapped in halls with really inadequate support,” they said. “We’re paying £9000, higher than £9000 a year for substandard tuition, online – which is just not the same as face-to-face learning.”

Chris Perrin, a fourth-year student, was also at the protest. When asked why he came, he said: “I’m mainly concerned about the price we’re paying for what we’re getting. It’s a disgrace. Students are suffering and the University is not providing enough support. It sucks being a student right now.”

Photos show the aftermath of Fallowfield protest after Manchester University students pulled down 'lockdown' fencing erected around their halls of residence pic.twitter.com/bAPquIJscx

Demonstrators also heard from Izzy Smitheman of the UoM Rent Strike organising group, who encouraged freshers withholding their rent to continue to do so.

She accused the University of using “tactics of intimidation and lying” to force rent strikers to “give in”, though insisted that this would not be happening.

Smitheman also accused the Vice-Chancellor of refusing to work with UoM Rent Strike, and called for students to continue to resist university management’s treatment of freshers living in “inhumane conditions” in halls.

Smitheman gave an impassioned speech earlier on this week, and told The Mancunion the protests were about much more than the events regarding the fence.

Protestors continued to hear from speakers, along with brief musical intervals, and a minutes silence to mark Remembrance Sunday.

As the protest came to a close, promises were made to continue to campaign in the interests of students, whether through more protests, direct action or petitions and online campaigns.

University of Manchester spokesperson said: “We fully understand that these are challenging and difficult times for our students.

“During the pandemic we have put in place a comprehensive support package for all students who are self-isolating, this includes a partnership with a major food retailer, support on wellbeing and other practical matters.

“This will again highlight the extensive support already in place, introduce a new out-of-hours mental health service and give all students the opportunity to tell us what they are struggling with and suggest enhancements to how we can support them.

“Following recent feedback, next week we will also be announcing increased support for students in halls of residence, with additional online and on-site advice and support available.

“Our University believes in transparency and we publish information about how fees are spent on our website.

“We want to hear students’ ideas for improving safety on our campus sites and we would ask you to write to [email protected] with your suggestions.”