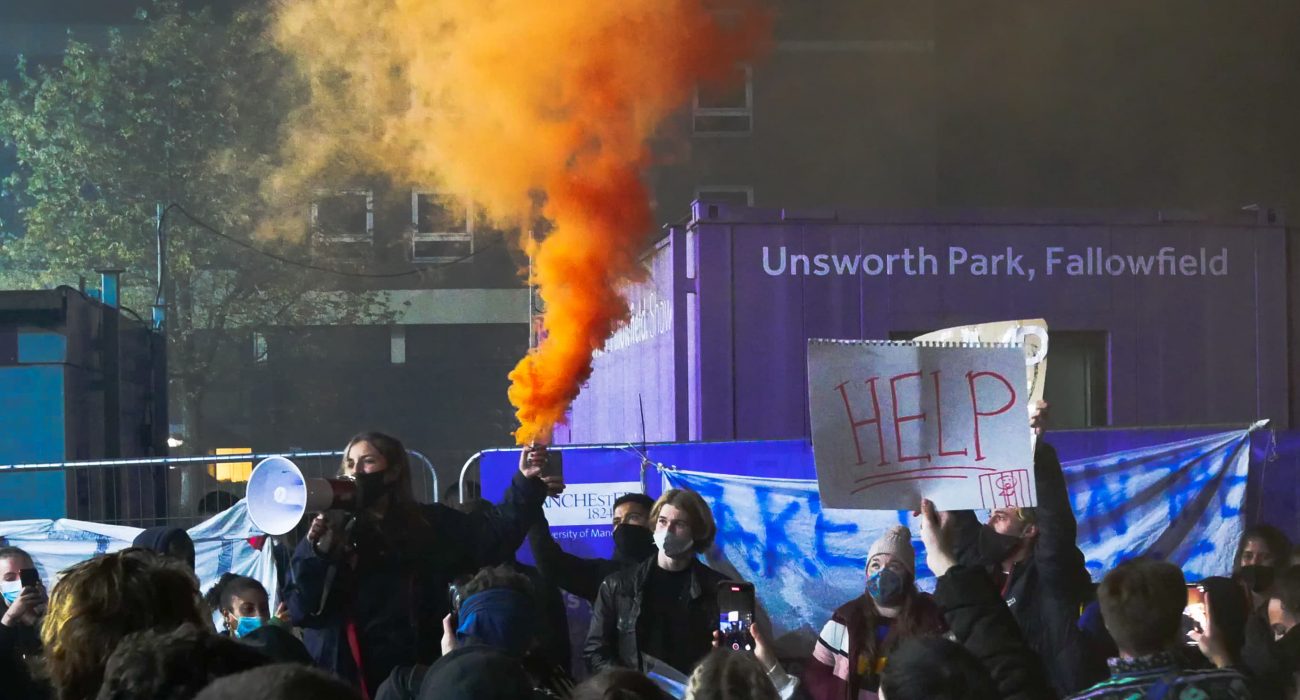 We see no reason,

Should ever be forgot.

Thursday the 5th of November saw the scapegoating of students take on a whole new literal meaning as the University of Manchester chose to fence in students as if they were farm animals rather than actual people. Students are understandably susceptible to feelings of panic when they look out of their window to see fences being constructed around their accommodation, being effectively confined to the space within. As if the walls of our pokey student rooms weren’t oppressive enough, now barriers were being erected in the little pockets of the outside world we’re still allowed to access.

It’s no wonder then that this outrage led to an impromptu in-person protest taking place at the University of Manchester’s Fallowfield Campus. Students were sick and tired of being treated with so little respect and consideration that the university had actually deemed fences an appropriate supposed security measure, and also somehow forgot to inform the students of this decision until the damage was done.

By then it was too late, as the time had come for us, the student population, to unite in taking to the streets (or at least the court outside of Owens Park accommodation) to put up a front against a university which has commodified us and placed profit over student well-being by opening halls this year, despite the ongoing threat of Covid. Expressing her support for the protests, a fellow student reminded me: “You’re a paying customer. The universities forget that. They made this system, they should be made to live with it”. I couldn’t agree more.

If university was a game of chess, then students – cast as the pawns – have been thrust into a seemingly continuous state of check-mate, materialised in the constraining metal edifices around the places we’re supposed to feel safe in. This seems especially fitting considering how much the University is trying to charge us for them. I’d call it daylight robbery, but that would involve actually being able to see any natural light from my ground floor room. Much like a game of chess, in which university is somehow both the king and the queen, possessing the freedom to move anywhere on the board, they seem to have forgotten that we student pawns vastly outnumber these authority figures and more so that it is not one single game but rather a tournament. One in which we will relentlessly persist, round after round after round. If the University wants to toy with our mental health and make our education an overpriced game, well then, let’s play.

Through this chess analogy, the phrase ‘Down with the Monarchy’ gains a new relevance on a bonfire night 415 years on from that of the infamous Gunpowder Plot. With the explosions of fireworks in the background serenading our political activism, we cultivated the sort of revolutionary atmosphere that I’m sure even Guy Fawkes himself would have commended. Thankfully, the fate of Fawkes also allows us to put our situations into perspective, when we consider that at the very least, the only ‘hanged, drawn and quartered’ we have to fear is being hung up on in zoom calls, withdrawn from our courses, and quartered into our student accommodation.

In an attempt to somewhat adhere to Covid-19 restrictions, from what I could tell, the vast majority of the crowd at the protest were wearing face masks. However, given that almost everyone currently residing on the Fallowfield campus has tested positive for Covid by now, that no longer seems as important as asserting our rights as students and demanding better conditions in university halls. Fencing us in so that it not only visually resembled but also psychologically felt like prison hasn’t been the best move the University of Manchester has made this academic year. Although, if nothing else, no one can say they’re not consistent in their failure to communicate fully with students and to do good on their promises, like that of ‘blended learning’.

Perhaps the biggest error the university made in the construction of the fences (supposedly to keep non-students out, rather than to actually detain the students within) was not realising just how quickly a photo or video will circulate among a student community. Especially amongst students and young people who’ve grown accustomed over the last two months to spending what feels like every waking minute in front of a screen. Again to reiterate – blended learning, my arse. 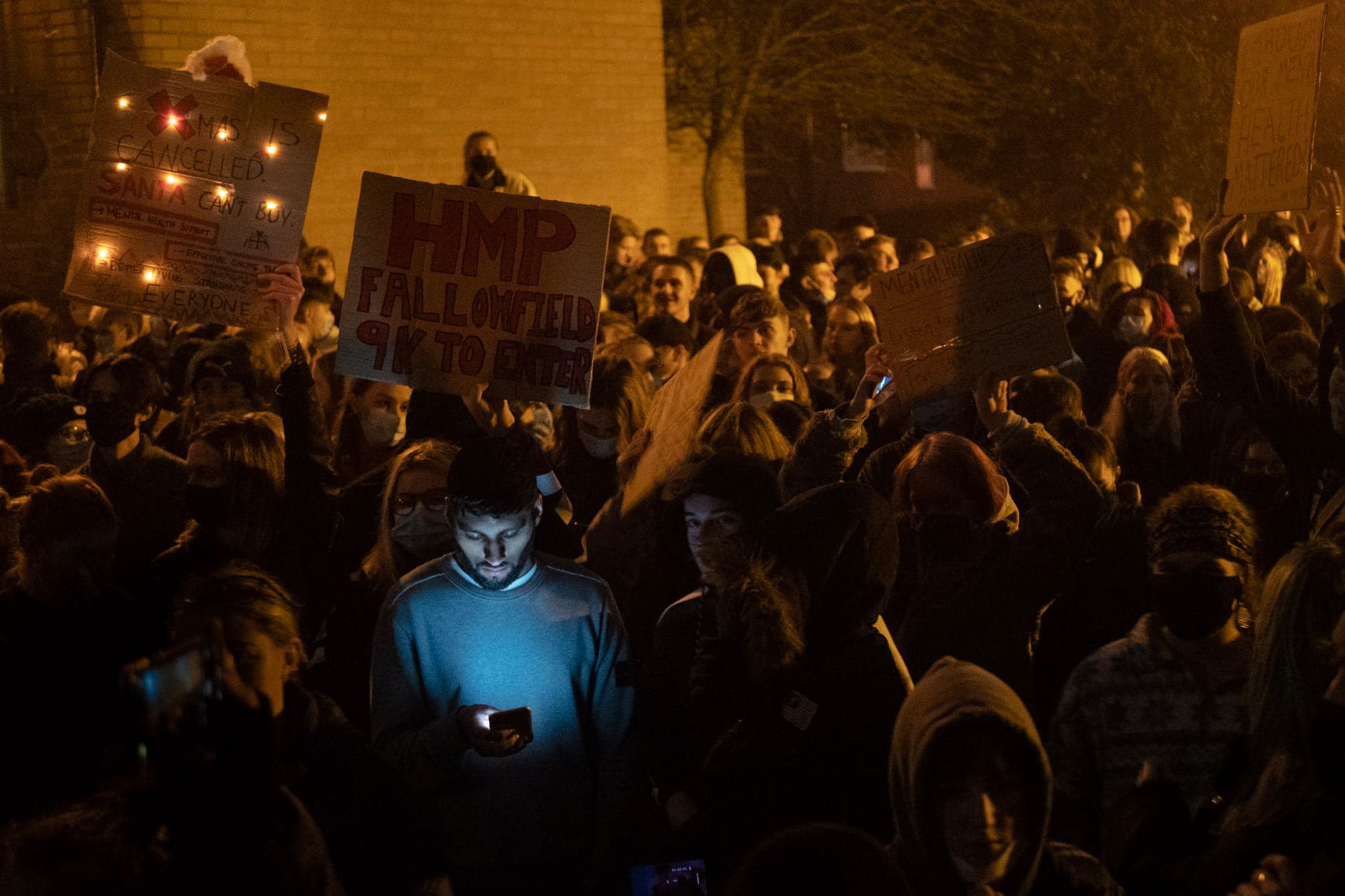 Students protest fences and the University response to the pandemic. Photo: Antonio Ross

The University’s decision to not only erect the fences without any sort of warning but to also respond to a students’ tweet about them before sending out a mass email was just the icing on the cake of ill-judgement. The following email sent later that evening with not one, not two, but three forms of apology was really the cherry on top. Mary Berry could never.

Back to the protest, the girl who spoke to the crowd was incredible in her commandment of the crowd and assertion of the changes we want to see take place as students, as well as in her demands for compensation for the poor handling of our situation so far (see @uomrentstrike). She simultaneously managed to hold the speakerphone, read from her mobile, and keep her mask covering her nose and mouth, which I consider no small feat. Her leadership of the crowd was elevated even more by the contrast between her captivating speech and the absolute ignorance awarded to the boy who clambered up to say a few words after her. By then it was too late, the smoke flares blending with the bonfire night displays, and the crowd was already heading towards the remainder of the fences in order to topple them. For a brief moment, it seemed like we’d irrevocably humbled the university authorities and combated patriarchy, all in one night. Power to the people, am I right?

As far as the fences being supposedly placed for security goes, I’d hate to rupture the carefully constructed masculinity of the fence over-throwers, but I saw a petite female student kick one down just on her own – so much for preventing non-students from entering the campus. One may even equate the ease of scaling a flimsy two metre fence into the Fallowfield campus with the ease with which so many privately-educated students got accepted into university –  due to exam cancellations and algorithm-produced results through class-privilege.

Whilst all this was taking place, two security guards observed from the sidelines. One even kindly ventured at one point to make us aware that we were being filmed. Little did he know that our own films of the protest would appear on BBC news later that night, exposing Manchester’s breach of contract with its students and evoking other universities to join us in solidarity of the lack of support given to students during the pandemic. Perhaps Gill Scott Heron was wrong — maybe the revolution will be televised after all. 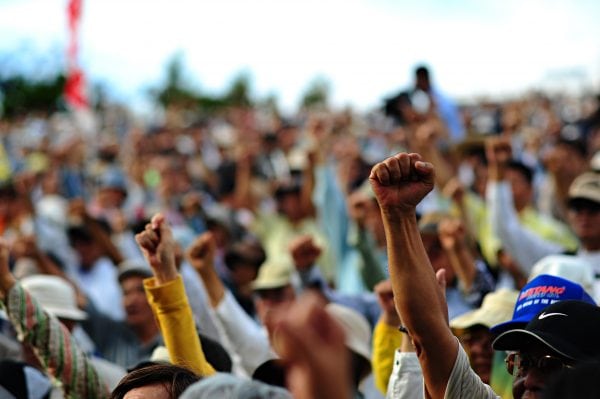 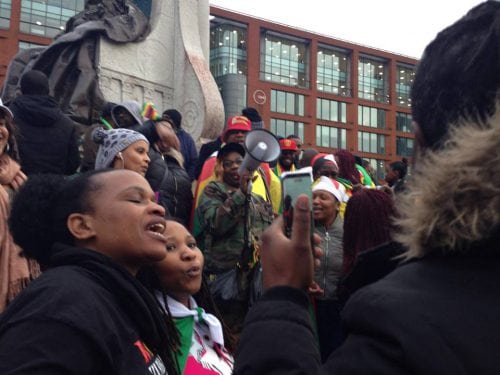