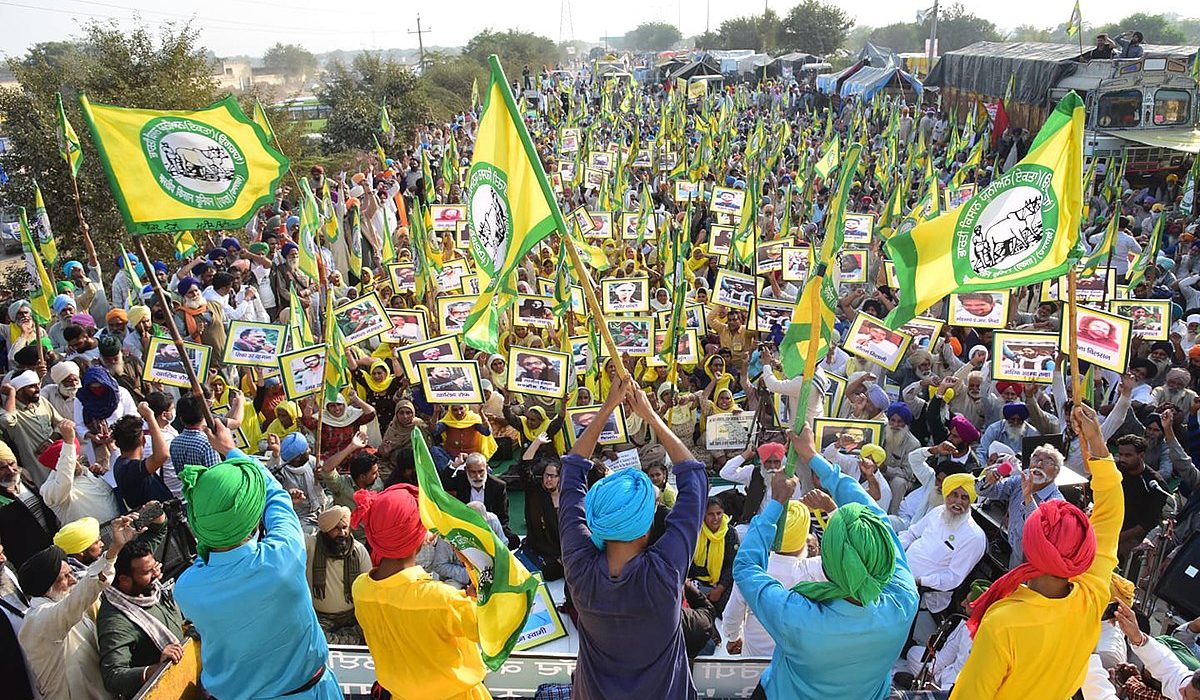 In India right now, there are currently over 250 million people – including 96 thousand tractors and 12 million farmers, along with students and civil society groups – engaging in the biggest peaceful protest in world history. The activists are opposing three new agricultural laws passed by Narendra Modi’s government in September of this year.

And yet, unless you’re a regular subscriber to the Dainik Bhaskar newspaper, it’s not immediately apparent how enormous this movement actually is. Alongside its status as a monumental political event involving the livelihoods of millions of people, I welcome the Indian farmers’ strike as a mental diversion from the relentless (and quite frankly dull) Brexit negotiations here in the UK.

The bills in question are the catchily-titled ‘Farmers’ Produce Trade and Commerce (Promotion and Facilitation) Act’; ‘Farmers (Empowerment and Protection) Agreement on Price Assurance and Farm Services Act’; and ‘Essential Commodities (Amendment) Act’. In enacting these laws, you could extrapolate (perhaps convolutedly) that the aim of the Indian government is to allow the country’s farmers more autonomy.

However, crucially, the ruling powers have overlooked the fact that 86.2% of Indian farmers are marginal and lack the negotiation power to deal with large corporate companies.

At this point, it does seem that an incompetent government overlooking the actual wants and needs of its country’s populace is somewhat of a universal concept. Maybe there’s an inadequacy quota that has to be met, or something.

Particular anxiety hovers around the practicality of these laws, labelled by agricultural workers as ‘corporate friendly’ and ‘anti farmer’. Indian farmers are understandably worried that the government’s retraction of its subsidies, which will allow private buyers more indulgence in the agricultural market, will leave them in a more vulnerable position and at risk of losing their smaller, independent businesses to large scale corporations who only value their own self-interest.

Whilst the Indian government argues that the bills would prevent payment to farmers being kept pending for months, the new laws essentially overlook the farmers’ capacity to manage their own trade. Last time I checked, I don’t think India had managed to break the chains of capitalism, and I don’t exactly see Adam Smith extending his ‘invisible hand’ to the farm labourers.

Even to someone with as little economic knowledge as myself, it’s obvious to me from the annual Christmas family board game that large companies would just try and monopolise farmers who will have no choice but to accept the lowest prices offered to them. Certainly I wouldn’t recommend my tactic – trying to bankrupt myself as quickly as possible so I can escape – as viable for an actual country.

In an already dwindling market economy, thanks to Covid, these reforms have been described by Indian farmers as a ‘death warrant’ in a trade sector in which suicides related to financial struggles are already rife. The commercialisation and privatization of farming will undoubtedly mean that larger companies will get more while the individual workers will get less. I’m not about to support capitalism, but at least you know where you are with it. Predictable.

Prime Minister Modi has described the passing of the bills as a “watershed moment” that will empower masses of Indian farmers. Surely the irony cannot be lost, even on him, that the only water shed so far is the one at the state border between Haryana and Punjab where, having built a blockade to prevent the farmers from entering the country’s capital, the police used water cannons and tear gas on peaceful protestors.

Further irony surrounds the date on which the protest began, 26th November 2020, which marks 71 years since the Indian Constitution was adopted by the Constituent Assembly of India, declaring India a sovereign, socialist, secular, democratic republic which would assure for its citizens justice, equality and liberty, and endeavour to promote fraternity. Apparently the government didn’t foresee this last part applying to a fraternity of 1.3 billion people.

Peaceful protests, as advocated for by India’s figurehead for independence Ghandi, are supposedly protected by the Indian Constitution. However, the country’s leadership seems to have suffered from selective amnesia in recent weeks.

Unfortunately, this isn’t the first time that those campaigning peacefully for their rights and livelihoods have been met with constabulary force and violence. Throughout history there have been numerous examples, such as the Peterloo Massacre of 1819, or the decades long civil rights movement in America.

What’s worse, is that we’ve come to live in a world where one doesn’t even need to be involved in a protest (non-violent or otherwise) to be vulnerable to police brutality. They merely need to be jogging down the street like Ahmaud Arbury, or driving a car like Philando Castile.

Despite the animosity of the police force in India, it’s understandable why these 250 million people, comprising 3% of India’s population, have reason to believe that they will achieve their charter eventually.

Following research carried out by Erica Chenowroth, the professor of Public Policy at Harvard Kennedy School, no government can withstand a challenge of 3.5% of its population without at least accommodating the movement (and in extreme cases, collapsing before it). In Britain, that equates to 2.3 million people actively engaging in a single movement (that’s 2,299,999 more people than there are Boris Johnsons in the UK, just for future reference).

We may look to protests throughout history in which the method of non-violence has proved successful, such as the ‘People Power’ movement in Manila in 1986, in which 2 million Filipinos prayed and protested and in doing so, toppled the presidency of Marcos in a mere 4 days.

Or the case of the ‘Brazilian Uprising’ in 1984-85, which involved 1 million participants peacefully remonstrating against the military government, resulting in a new constitution and a new democratically elected president, Fernando Collor de Mello.

In 1987, Estonia reached the required 3.5% participation to overthrow Soviet rule by way of a ‘Singing Revolution’, and 1989 saw the ‘Velvet Revolution’ (also known as the ‘Gentle Revolution’) in Czechoslovakia, in which 500,000 participants overthrew communist regime and recovered democracy.

More recently, the bloodless ‘Rose Revolution’ in Georgia in 2003, saw demonstrators peacefully enter a parliament session armed with red roses (although I reckon those thorns could have done some real damage), and in 2019, the nonviolent resistance movements in Algeria and Sudan succeeded in ousting their respective unfavourable presidents.

It’s no wonder really, when you consider the population-based success of nonviolent protests, that they have led to political change 53% of the time, compared to 26% of violent demonstrations (out of the cases Chenowroth researched). Because the fact of the matter is, it’s easier to convince more people to join a protest if they’re not in fear of getting hurt or having to cause harm to other people.

They are, as a whole, more accessible and more inclusive as a form of political activism than full-out riots. Surely, if nothing else, this restores our faith in at least 3.5% of humanity, as willingness to participate in non-violent protests paints a largely benevolent and pacifistic human nature in general. Eat your heart out Orwell.

When you think about it, Chenowroth’s 3.5% discovery should come down to simple maths really. Even I can see that 3.5% is surely of a greater value than the 1% (even if the latter do hold 50% of the world’s wealth).

Fundamentally, the current protests in India seem to provide an example of how the ruling powers continually misinterpret the needs and practical desires of the country they govern. And Chenowroth’s research further exposes how hierarchical structures are subconsciously upheld by those considered to occupy the lowest societal tier.

Often in terms of politics and government policies, whilst these groups suffer the worst aspects of inequality, they’re not in the minority and their power, when united, is palpable.