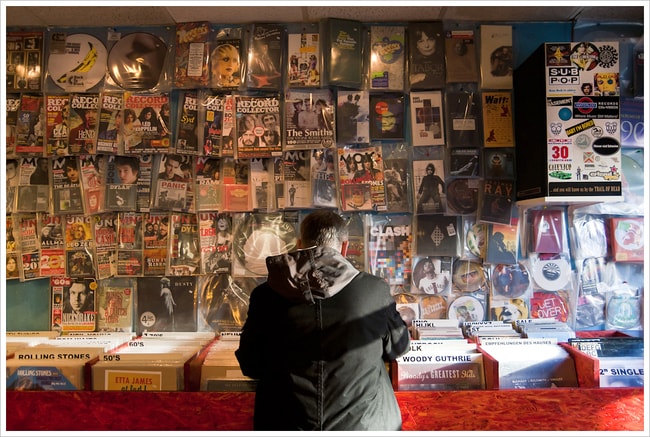 At their most powerful, album covers transcend the music they denote and are art forms in their own right. From the iconic designs of Manchester’s own Peter Saville to the contemporary photography of Vlad Sepetov, cover art can linger in our imaginations long after we’ve stopped humming their associated tunes.

We asked our music and arts teams to share the album cover art that has lingered with them.

“I was familiar with this image before I’d even heard of the Manic Street Preachers, never mind listened to the album. Its design is a triptych painting titled ‘Strategy’ by the feminist artist Jenny Saville.

It depicts a plus-sized woman in her underwear, challenging ideals of beauty. Richey Edwards, the band’s lyricist who has been missing since 1995, approached Saville and requested that the artwork be used for the album cover; she allowed it for free.

The album deals with many controversial and taboo subjects, including body image, and therefore it is a perfect fit. This is both a visually and aurally transgressive record.” – Sarah

“It turns out that I’ve never looked closely before at my favourite covers. I’ve always loved this one – a collage made from National Geographic photographs – and must have looked at it a hundred times, without having noticed myriad details.

For instance, that none of the children crammed into this hot tub with various wild animals look very happy about it. Or their headwear, which includes a revolutionary-era Phrygian cap and a boat made from newspaper.

Yet there’s something spontaneously joyful about this surreal collage, in which all of the children and animals are the same size and look like they’re trying to make the best of an awkward situation.” – Sam

“The story behind the album cover for ‘In The Court of the Crimson King’ by King Crimson makes the image all the more unforgettable. Like all great rock’n’roll, the artwork emerged intuitively. Barry Godber painted what he perceived from the song “21st Century Schizoid Man”.

The face seems desperately sad and insane but once you’ve looked, you can’t stop looking. This ambivalent emotional chaos is at the heart of the group itself. Barry Godber was only 24 when he died, a year after the album was released. In this writer’s opinion, the album cover is unequalled.” – Alienor

“Suede’s 1996 Britpop classic Coming Up will always take me back to the end of a manic first year of university, brought to an abrupt and emotional close by coronavirus.

Tracks like ‘Trash’ and ‘Picnic By The Motorway’ flawlessly embody the spirit of having the best of times in what could be pretty dire circumstances (anyone who has had the pleasure of visiting an Oak House kitchen can attest to this).

The album’s artwork – beautiful models lounging on an old mattress – is a perfect fit. It was designed by Mancunian legend Peter Saville (responsible for Joy Division and New Order album covers), and walking past his mural in Withington is a nice reminder of simpler times.” – Robbie

“Gorillaz’ second album ‘Demon Days’ is one of the first albums I owned. As a child in the 2000s, I was excited by this visually striking virtual band and continue to enjoy their work to this day. The cover is divided into four panels, featuring an illustration by Jamie Hewlett of each band member’s side profile.

Each character seems to be in despair and this emotion is reflected in many of the album’s tracks which touch on issues ranging from war to climate change. The band later referenced this format on 2017’s ‘Humanz’, but with more vibrant colours, indicating a tonal shift in their increasingly eclectic discography.” – Sarah

“This dreamlike photograph of a semi-naked flamenco dancer was apparently inspired by lead singer Black Francis’ father’s topless Spanish bar. Pixies were the first rock band I felt I ‘owned’ as a teenager, and this, their first album cover, symbolised defiance and rebellion for me.

To this geeky and confused teenager, it said ‘weird is cool, and even sexy.’ Looking at it now, my eye is drawn less to the dramatic bolt of black cloth behind her – which blows up the tossing of her hair to epic proportions – and more to other carefully-arranged surreal elements.

The floating, severed guitar head. The fish(?). What could just as well be cigarette burns or bullet-holes in the wall. Just like a dream, on closer inspection, it was weirder than it seemed at the time.” – Sam