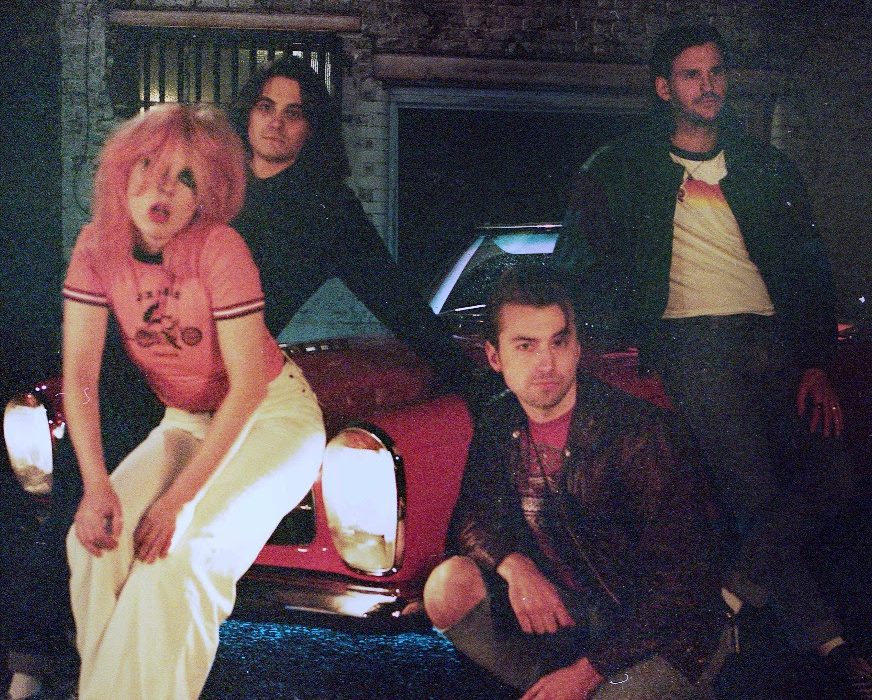 Empowering indie rock band Black Honey are yet to disappoint with their enormous powerhouse of a new album. In a constant lime-light of the feminist gaze, Black Honey inspire female independence with their wanton disgrace and criticism of being referred to as a ‘female-fronted band’, as Izzy B has famously shouted ‘female is not a genre’.

Their ever-evolving, effortless style screams ‘punk rock feminism’. Greeted with poetic lyricism and dizzying guitar solos in perfect harmony, they take on styles made famous by Lana Del Rey and Blondie and truly make it their own.

“I made this record for young women to feel invincible.”

Welcome to the future of indie rock, written and directed by Black Honey…

Written and Directed follows on from Black Honey’s stellar eponymous debut album, released in 2018, which features fan-favourite tracks such as ‘Dig’, ‘Midnight’ and ‘Hello Today’. Their knock-out debut gained them a loyal fanbase and a new-found confidence, which showed them strut around the UK on numerous tours.

Written and Directed acts almost as a mission statement to empower female fans and encourage women take a stand, in true ‘RIOT GRRRL’ fashion (hats off to Bikini Kill’s Kathleen Hanna). With their new album and an amalgamation of gleaming tracks, the Brighton four-piece are back, and better than ever.

The album opens with ‘I Like The Way You Die’, and in true Black Honey fashion, this fully-loaded track takes an egalitarian stomp on male egotism through the criticism of alpha-males – a witch hunt lead by the feminist power of front-woman Izzy. With underlying gothic and gruesome themes, this track pinpoints the ‘anything-goes’ attitude (also reminiscent of their awe-inspiring stage presence) that the band are portraying in this 10-track masterpiece.

This brand-new album is as much a cinematic feat as it is a musical one, with its hyper-visual elements and entrancing accompanying videos.

The second track, ‘Run For Cover’ demonstrates an effortless, yet revolutionary, evolution in Black Honey’s classic style, exploring her power, sexuality and femininity through the gripping, attitudinal and sensual lyrics – all written from a man’s perspective. Created in collaboration with Royal Blood’s Mike Kerr, this riotous track is, more simply put, Black Honey on steroids – ‘all my pride walked, so run for cover could run.‘

Speaking to Music Is To Blame, Izzy described the single: “Imagine it’s like a 1950’s rocker-billie hand jive, ballroom dance – it’s the party of your life. It’s the most ‘Black Honey’ thing we’ve ever made.”

Inspired by one of America’s most legendary bands, The Beach Boys, with a nostalgic blend of playground antics and staple guitars, the next track ‘Beaches’ encapsulates everything Izzy stands for; nonsensical lyrics and 60’s vibes – think cowboy hats and polka-dot bikinis meets retro rock vibes and upbeat harmonies.

“I like it because it’s the most nonsensical that I’ve written and there’s not necessarily a story line, it’s about being a bit mischievous I think and living your best life, being feminist and not giving a fuck.”

Fast paced and energetic, ‘Back of the Bar’ makes a segway between two hit singles. Reminiscent of summer-days and filled with hazy vocals makes this perfect driving-away-into-the-sunset soundtrack. Offering a dreamy escapism, Black Honey have transitioned from a dark pop team to one able to create sunny landscapes of bubbly vocals and longing filed lyrics.

Black Honey use track five, ‘Believer’, to release all their glamourous character, resulting in a dazzling mid-album swinger. An unlikely pair of religious satire and western themes find their home in this coming-of-age track which produces a spiritually tantalising teaser for the rest of the album.

The latest single to be released ahead of the album, ‘Disinfect’ serves as a stark reminder of current world affairs, and almost as a premonition, having been penned before the pandemic even thought about taking hold. This end-of-the-world scenario come commentary piece is an honest and thought provoking look at society through politically charged lyrics and the news-clip montages of the accompanying music video.

Screaming electric guitars, fuzzy bass lines and Izzy’s sultry, seductive voice, open up ‘Summer ’92’. Punk-infused and utterly brilliant, we see Black Honey go back to their roots of ‘Spinning Wheel’ in their eighth track – a truly amicable display of their evolution as a band, without straying too far from their start. Layered, echoey vocals almost have you stomping your feet and clapping your hands in true hoe-down fashion.

Finishing off with melancholic ‘Gabrielle’, the simplistic yet mature track rings reminiscent of ‘Corinne’, a lost-love ballad filled with longing. Carefully plucked guitar strings compliment soft vocals in this acoustic wonderland and pull together a sonically astounding second offering .

The quartet have come leaps and bounds since their previous album and I can only hope they continue on this smooth, psychedlic, punk-rock journey.

One listen to their revolutionary sophomore album and you will come away feeling empowered and invincible… trust me on this one. I, for one, can’t wait to see which direction their trajectory takes them in. Sink your teeth in and digest all of the anything-goes powerful attitudes.