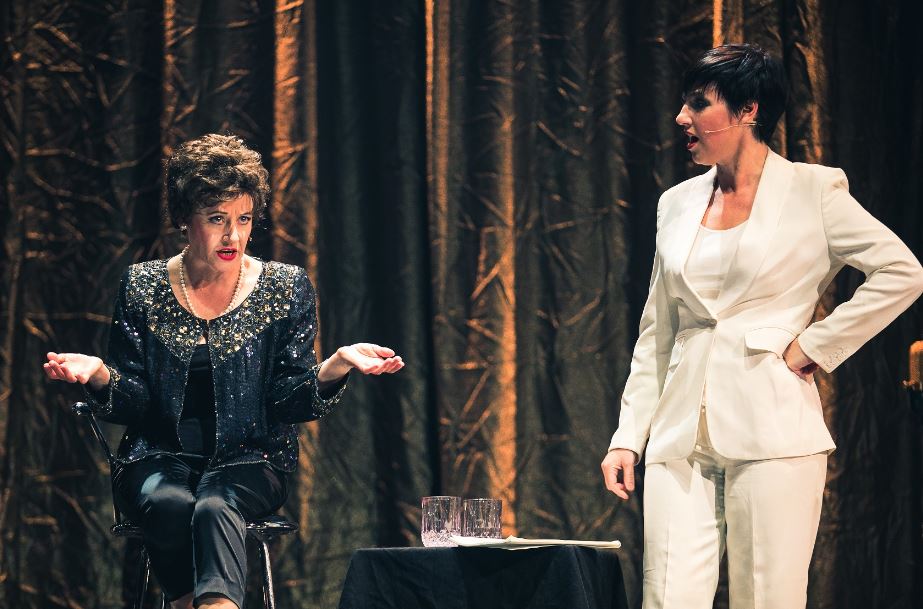 There has been many a notable mother-daughter duo. Jada and Willow. Kris and Kim. Goldie and Kate.

Few, however, are as notable and incredible as Judy and Liza. Heck, they’re both so legendary, people often forget that they’re mother and daughter.

At 75, Liza Minnelli (Cabaret) is older than her mother, Judy Garland (The Wizard of Oz), was when she died. Garland died of a drug overdose, aged just 47, leaving behind three children, including Liza, who was just 23 years old at the time.

I was not sure what to expect with this show. I wondered whether it was a tribute concert, a concert musical, or a biographical musical.

The show is billed as a bio musical, but it could also be considered a concert musical, for the show is essentially Judy and Liza putting on a concert in which they sing their classics and talk about their lives.

Theatre in the time of Covid

HOPE FEST was a three-week festival – a programme of arts and cultural events – by the acclaimed, ever-growing Hope Mill Theatre.

Rather than taking place at Hope Mill Theatre, the festival took place inside a large theatre tent, with a (socially-distanced) 250 capacity, not far from Hope Mill.

We were seated on picnic benches, which was cute and different. It made for a very relaxed experience.

I wouldn’t have liked to have been sat on these benches for too long, but it was fine for a short (and chill) show like this.

The benches were placed so that the seats ran parallel to the stage. This saved people from having to turn their heads to see the stage, but it might become a little tricky if there’s more than two people on the benches. This would mean that some of your party would have to sit on the other side of the bench, so not only were they unable to lean on the table but they also might have blocked the view of the people on the other side of their bench.

Luckily for us, it was just me and my aunty, Cristina, and social distancing meant nobody else was placed on our bench, so we had a pretty good view of the stage.

The ground was not sloped, however, and the stage was not that high, so a little leaning to either side was required.

Judy Garland was played by Helen Sheals, who has worked extensively in theatre and television. Some people will recognise her as Mrs. Wigan in the iconic TV show ‘Downton Abbey.’ She’s no stranger to the role of Judy, having played her in the West End musical Judy!

Liza Minnelli, meanwhile, was played by Emma Dears, who also has a long list of theatre and television credits. She recently starred as Crone in the critically acclaimed ‘It’s a Sin.’ Dears is also the writer of the musical.

As one can imagine, the show was pretty emotional at times, but the script made sure to include plenty of heartwarming comedy.

A memorable moment happened early on in the show when Judy asked the audience what song they should sing next. A prerecorded voice shouted out “Somewhere Over the Rainbow,” which Judy hilariously shut down. She said something along the lines of “oh, not yet”; her delivery was brilliant.

‘Somewhere Over the Rainbow’ was sung, by Judy alone, at the end of the first act. Admittedly, it was not the vibrant performance audiences had been hoping for, for it was sang by an older Judy, whose voice had been damaged by excessive substance abuse.

The musical wanted to stay true to reality. Having Sheals sing the song to the best of her ability would have been masking the sad, dark reality of what happened to Judy. As the show made clear, Judy was pushed on to pills by TV executives and remained addicted to them for the rest of her (short) life.

I’m glad they placed the song here, when Judy was older, and not when she was talking about The Wizard of Oz. The desperate lyrics of the song resonate much better with Judy at this stage in her life.

The only problem with this performance was that Sheals was sat at the edge of the stage, which was not that high, and the audience were seated on a floor that was not sloped, so much of the audience could not even see her face. Not being able to see Sheals’s face really took away from the emotion of the song.

Dears gave an incredible performance of ‘Cabaret,’ but her best song was a rendition of one I’d never heard before: ‘Liza with a Z.’ This song is a real tongue-twister, especially because it is sang at such great speed. Dears did not trip on her words even once; the audience were in awe of her talent.

Dears showed great emotion when talking about Judy’s death; both actresses masterfully covered both lady’s highs and lows. The smooth ease in which they switched from joy to despair is applaudable.

Bio musicals often end by bringing the deceased main character back to life. The musical TV show ‘Smash’ follows the creation of a musical called ‘Bombshell,’ which tells the story of Marilyn Monroe. The musical’s writers realise that audiences do not want to see a musical which ends with Monroe dying, so they decide to end it with Monroe (a ghost, of sorts) taking to the stage and begging the audience not to forget her – the real her – in a powerful final song.

Later, I saw the wonderful musical ‘Dusty’ and was unsurprised that it ended in a similar way: after Dusty died, she came back to the stage, glamorous once again, to perform ‘You Don’t Have to Say You Love Me.’ It was not clear whether this was a flashback or spiritual, but it worked, either way.

The audience was left to make our minds up about what was happening – were we seeing an old performance of the mother-daughter duo, was this Liza singing with the ghost (or a memory) of her mother, or did the writers just want to end the show with both women taking to the stage for a joint performance?

The final song was a medley of ‘Somewhere Over the Rainbow’ and ‘Maybe This Time,’ two beautiful songs with similar themes – most noticeably, a yearning to finally achieve happiness.

The song was a summary of the show: Judy and Liza both faced a lot of hardships and heartache in their lives – for instance, tumultuous lovelifes.

After the (deliberately) breathy and tired rendition of ‘Somewhere Over the Rainbow’ that closed Act 1, the audience seemed delighted to be treated to a more powerful and energetic version of the song.

Whilst the musical had become quite emotional, especially after Judy’s death, this medley seemed to signal that Judy is at peace, at last – somewhere over the rainbow…