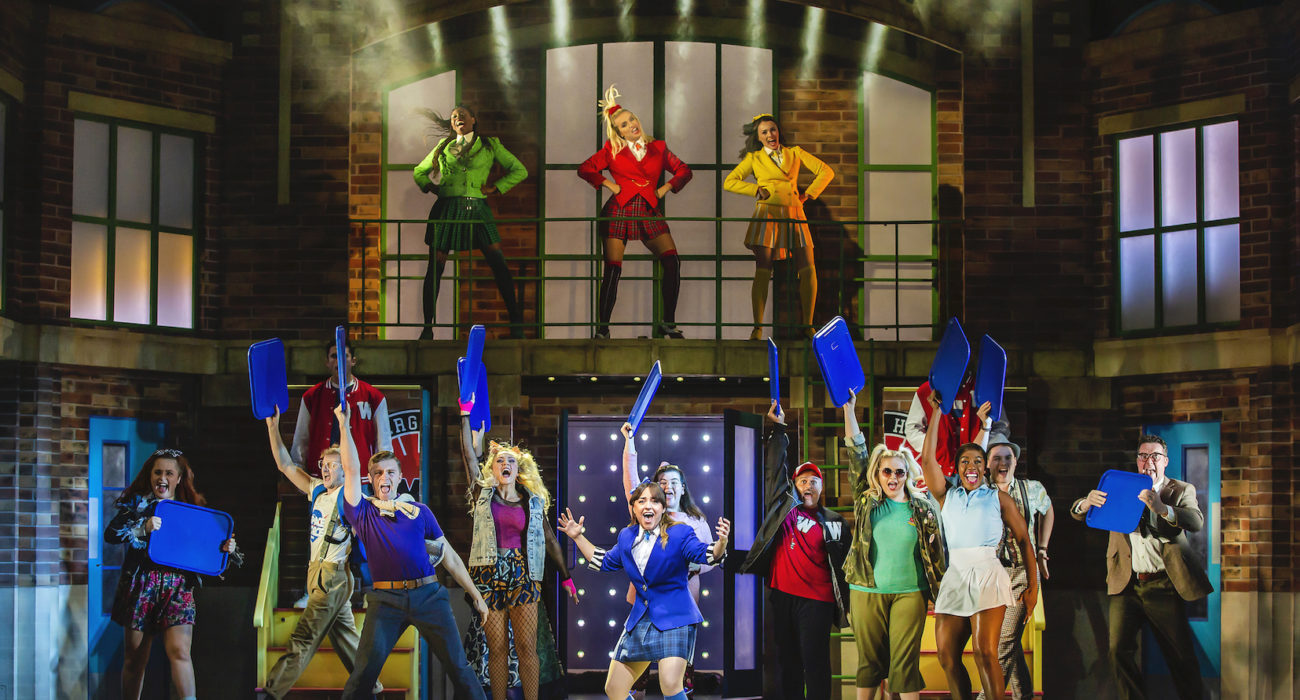 Welcome to my candy store! This review contains countless spoilers. Proceed at your own peril…

There seems to be so many musical adaptations of films in the West End at the moment. I recently caught The Prince of Egypt and Pretty Woman in the West End and Dirty Dancing in Manchester. Manchester is soon welcoming Grease and the debut tour of Bedknobs and Broomsticks.

Based on the cult classic of the same name – starring Hollywood icons Winona Ryder, Christian Slater and Shannen Doherty – Heathers finally arrived in Manchester as part of its first ever UK tour.

Whilst Dirty Dancing and Pretty Woman were mainly unchanged, aside for the breaking into song, Heathers crafted something new. It was easier to do this with Heathers. It’s a cult film, not a well-known classic or a household name like the other two.

I knew I’d love Heathers. I just knew it. Yet, it ended up being even better than I anticipated. Along with fellow rock musical Bat Out of Hell, which I caught a few weeks back, it is one of the best musicals that I’ve ever seen. Even better – it makes up for the travesty that was Dirty Dancing a week prior.

Set in an American high school in the 80s, Heathers has three title characters (villains), the mean girls of the school.

But that is essentially what the titular Heathers are: Mean Girls but deeper, darker and deadlier (oh, and deader).

As soon as the musical started, I knew it was going to be good. Rebecca Wickes was extremely likeable as the protagonist (and at times, anti-hero), Veronica.

It’s not easy to play a character made famous by Winona Ryder. Or even follow Annaleigh Ashford’s first performance, first debuted in the US. Let alone follow none other than British musical theatre’s sweetheart, Carrie Hope Fletcher! But Wickes’ talent and charm enabled me to quickly forget about the famous faces to take on that role.

The hellish introduction of the Heathers in the opening song was deliciously villainous. Right away, the musical wanted us to know that these are not high schoolers; they’re demons in human flesh – at least that’s how the other students saw them.

This metaphor continued with Veronica referring to the main Heather as a “mythic bitch” and a “demon queen” – and envisioning her as a devil in her nightmare.

This rock musical is jam-packed with memorable bangers. Such as the Heathers’ main song, ‘Candy Store’, and Veronica’s main solo, ‘Dead Girl Walking’ – which is beautifully reprised in the second act.

Heathers and Les Mis could not be more different. They do have one thing in common: the show is stolen by a character who dies early on. Whilst Fantine returns towards the end of Les Mis, the character who meets a grisly fate early on in Heathers never seems to leave the stage after her death.

The musical explores many social issues in the microcosm of a high school. As J.D. (Simon Gordon), the musical’s male lead and Veronica’s love interest, notes: high school is not a product of society; it is society.

Whilst the trials and tribulations of high school test the characters’ loyalty, the musical also has us, the audience, questioning our loyalties. The Heathers are cruel and calculating, but we love them – even before we know the reason why the secondary Heathers are the way that they are.

J.D. is introduced as a secondary protagonist, but we soon learn that he is not the hero we thought he was. Whilst lots of genres can have you rooting for the baddie, only musical theatre can get you to love a lead character that is, essentially – BIG SPOILER – a school shooter. There’s no business like showbusiness!

J.D. was recently played by Jordan Luke Gage in the West End – who I interviewed prior to the world premiere of & Juliet. A sweetheart of British theatre who first garnered recognition as the lead in Bat Out of Hell.

It’s not easy to step into a role that was recently performed by an actor adored by the girls (and the gays). But Gordon played J.D. to perfection.

A particularly memorable moment in the show was when Heather Duke decided to take over Heather Chandler as the “Demon Queen” of Westberg High School.

It was cathartic watching her steal the stage with her number ‘Never Shut Up Again’. Especially after Heather Chandler told her to shut up when she attempted a solo riff in ‘Candy Store’.

I’m a sucker for a costume change, and Heather Duke’s during this number has to be one of the best that I’ve ever seen. Members of the ensemble literally ripped the green off of her, revealing a red version of her outfit underneath: she has transformed into Heather Chandler.

Yet, her green stockings and heels remain on her for the rest of the show. This symbolised even though she has stepped into Heather Chandler’s shoes, she’ll never be able to fill them; she’ll always be the second Heather. Whilst Heather Chandler was a tyrant, she ensured rule and order; without her at the helm, the school erupts into chaos.

Heather McNamara finally got her big moment with the solo song ‘Lifeboat’ – a beautiful redemption for a troubled teen and a scared little girl masquerading as a big, bad bitch. We all know a Heather McNamara – a lonely, insecure person, who tries so hard to appear strong and confident that they come across as rude and obnoxious.

McNamara’s ballad was rivalled with Martha’s ‘Kindergarten Boyfriend’. The most likeable and sympathetic character in the show – and perhaps the only one who truly deserved to be liked. It was lovely for Martha to finally get to speak (or sing) herself instead of be spoken over or spoken for.

Perhaps the audience’s favourite number was the one that opened the second act. I’m often a little tired by the start of the second act, so kicking it off with a big, memorable number is a clever creative decision.

Whilst Kurt’s dad (Andy Brady) expresses shame and embarrassment. Ram’s dad (Kurt Kansley) defends their son’s against his homophobia – to woops and applause from the audience.

They then perform the number ‘Dead Gay Son’. I’d seen merch with that line printed on it during the interval; I presumed all would be revealed in the second act.

The number ended with the revelation that the late boys’ dads used to be gay lovers!

This big, gay number received a stellar applause from the audience. It played with gay stereotypes in such a clever, creative (and fabulous) way, neither distasteful or offensive, as is sometimes the case. But a celebration of all things queer and a love letter, of sorts, to the many queer fans of musical theatre – and the film Heathers.

The ensemble number ‘Shine a Light’, lead by Ms. Fleming (Georgina Hagen), was a highlight of the show. The number began with Fleming revealing that she is having an affair with a member of the audience. She made the poor, shocked man stand up, called off their relationship, and joked about his hair.

Hilariously, the man was bald, so she joked about him forgetting his hair or leaving it at home. I’m not sure if this was impromptu, or if she often looks for a bald man, but her timing and delivery were perfect.

Whilst ostensibly very funny, this number was part of the musical’s attempt to reveal the disingenuity of people when it comes to serious issues, such as mental health and suicide. This song explores how people use serious issues and tragic events to their advantage. This was especially relevant given the era of performative activism that we are currently living in (ech-hm, black squares on Instagram).

The musical is very relevant with the themes it tackles, but some themes felt all the more relevant right now, such as the scene in which Kurt and Ram attempt to rape Veronica.

The audience loved it when the guys stripped off into their undies, revealing washboard abs – even though we knew that they were about to commit an egregious crime.

There seems to be a lot of naked, ripped men in Manchester musicals lately – Falco (Rob Fowler) in Bat Out of Hell and Johnny (Michael O’Reilly) in Dirty Dancing both treated audiences to their near-bare bodies. Some might consider that the highlight of Dirty Dancing, but let’s stop with the Dirty Dancing hate…

Whilst the attempted rape scene contains a lot of humour, it was a little uncomfortable to watch in the aftermath of Sarah Everard’s trial – and, more broadly, in a post-Me Too society.

I’m glad that the scene was not removed, or even sanitised, as is increasingly the case. This scene was never about making light of sexual assault; the musical cleverly uses dark comedy to tackle important issues.

There’s so much more I could talk about – the set, the costumes, the music – which were all incredible. I was particularly fond of the lighting, especially when the Heathers were lit by spotlights in their corresponding colours. I must also give a nod to the punky conductor – have you ever seen a conductor with a mohawk before?! It was very fitting for this musical.

I’m sorry for all of the spoilers in this review, but I did put a disclaimer. At least, for those of you who thought that the film Heathers was just Mean Girls before Mean Girls, you won’t be so shocked when the protagonists start killing!

During the interval, Georgina and I met a couple in the queue – that I later realised was celebrity chef Andrew Nutter and Manchester Confidential’s Georgina Hague! Whilst he was the one who wanted to see the show, he had never seen the film upon which it was based, so he was pretty shocked when the musical took a dark turn.

Similarly, a colleague of mine from The Circle, who absolutely loves musical theatre, but did not know what Heathers was about, had just expected it to be like Mean Girls.

But then the killing started…

I cannot recommend Heathers enough. I’m used to being one of the youngest people in the audience, but this was possibly the youngest theatre crowd I’ve ever seen – and also one of the gayest!

Loads of people dressed up, and the queue for merchandise was pretty crazy – which was annoying – but it just goes to show how much people love this musical.

Whilst the merch was some of the best theatre merch I’ve seen, walking around with a tote bag that says “My Dead Gay Son” on it might put you at the receiving end of a few strange looks…

Heathers tours the UK throughout 2021.