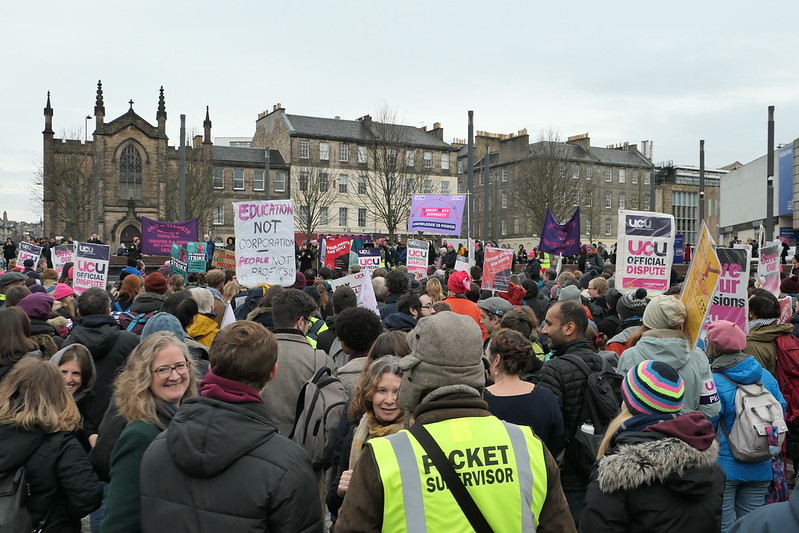 Faculty staff at the University of Manchester will strike this term after a ballot over pay and working conditions returned in favour of action to be taken. The ballot has been referred to as the ‘four fights’ as the ballot concerns: Inequality, Casualisation, Pay, and Workload.

Balloting over strikes began last month over two issues, the first of which was a dispute over pension cuts which did not meet the threshold of legal required returned ballots in order for strikes to take place. However, on Friday evening a ballot over strikes on pay and working conditions returned meeting the threshold and voting overwhelmingly in favour of the action.

UCU Manchester have released this statement:

Staff across Higher Education are in dispute with management because of our concerns about rising workloads, insecure contracts, growing pay gaps, and falling pay and pensions benefits, and the national results of the UCU ballot on these issues suggest a continuing pattern over the last decade of increasing or sustained voter turnouts, and percentages overwhelmingly voting for action. We know that these issues affect students too, because our working conditions are your learning conditions. We want University managements to change to treat staff and students with respect, and to put education and research first, over fees and rent. Whatever happens with the ballot results, we will continue to fight for a better university for you, your siblings and kids, and for current and future staff. If University managements continue to ignore the concerns of lecturers, tutors, librarians, technicians, and other staff in our negotiations, we will have to take further action. But if and when we do, we will do everything we can to communicate clearly to you what it means for our interactions, classes and degrees.

The reasons for striking constitute the previously mentioned four fights, which had been exacerbated by the Pandemic. With regards to inequality the UoM gender pay gap equates to 17.2%, as of 2019 and the ethnicity pay gap equates to 17.9%. On casualisation, 2455 out of 5150 are on fixed term contracts. On workload, 85% of staff said that they often had to put in extra time to meet the demands of my workload.

The strike action ballot has come as the union say that the strikes come in response to ‘pensions cut of 35%, pay down by 20%, a gender pay gap of 20%, nearly half of teaching staff on insecure contracts and increasing workloads.’

For the universities who voted yes to strike action over pensions, meetings will be held on 12th November to discuss next steps and organise what strike action will involve.

The University of Manchester have been contacted for comment.