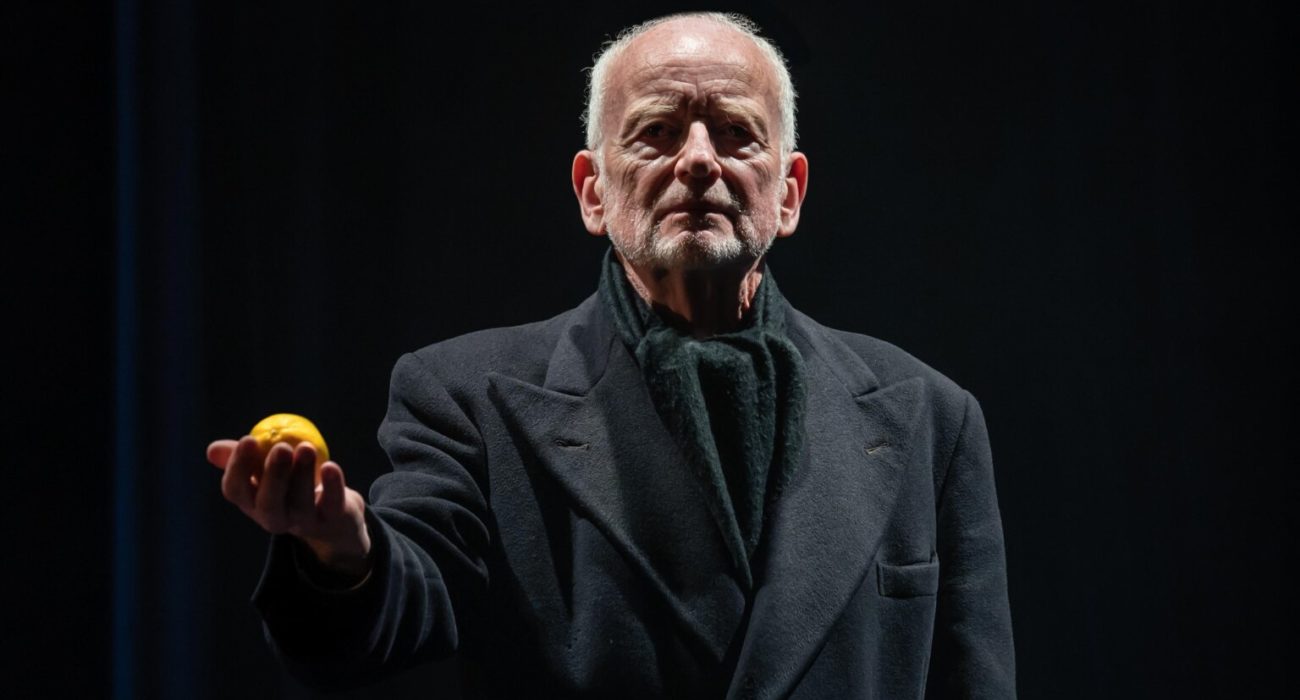 Ian McDiarmid’s new one-man show, The Lemon Table, is an insightful, exhilarating look at age, mortality, and the power of silence.

The Lemon Table consists of two plays, each of approximately 30 minutes, based on short stories by Julian Barnes included in his collection of the same name.

Vigilance centres around a frustrated concert-goer whose trials and tribulations consist of people talking loud, coughing, and unwrapping sweets. He laments that the experience isn’t the same anymore, musing that he’s unable to enjoy the concert due to the distractions of the audience.

At times, this first half felt like a stand-up routine. McDiarmid was mesmerising. His command of the stage had an almost spell-like effect over the audience. Whilst his body language was strong and use of the space impressive, McDiarmid’s greatest asset is clearly his voice.

Best-known for his role as Emperor Palpatine in Star Wars, McDiarmid’s voice is synonymous to many as a cackling, ghoulish villain – the personification of evil, anger, and hatred.

Here, however, his voice guides the audience through the highs and lows of a man obsessed with silence. Displaying a range of tone, pitch, and volume, McDiarmid’s vocal range is truly impressive. His ability to inhabit, not just project, a character makes it all the more effective – and entertaining.

The true highlight of the first performance was the way McDiarmid engaged with the audience. Barnes’ Vigilance is a story that relies on the relation between a live audience and the performer. There’s something almost sacred about the time spent in the theatre watching a live performance, where you are not just an abstract, detached viewer to be entertained but a person to be performed to and impressed upon.

In relation to The Lemon Table, this is doubly important. The way McDiarmid elicited laughs and shocks to the audience as he told the tale of the cantankerous concert-goer was as important as the lighting and sound. His engaging narration, coupled with a simple but effective set, allowed an image of the concert-goer to form in the audience’s minds, giving us a portrait of a flawed man who values art above all else.

Another driving force behind Vigilance is the subtlety in storytelling. Included in the man’s monologue are glimpses into his personal life and relationship with his partner, Andrew. Key to these parts of the play are the comments on growing old. Both Andrew and the concert-goer are described as having specific quirks and eccentricities, with the former’s being collecting firewood and swearing at motorists in the play’s funniest sequence.

What is most powerful, however, is the commentary on age and relationships. From the brief snippets of descriptions afforded to us, we begin to construct an image of their lives. One fraught with drama, regret, love, and resentment.

The key to The Lemon Table’s success, and the reason behind its brilliance, is the way these complex themes are implied to the audience, particularly in this first play.

Following a brief break, with only time for a costume change, McDiarmid treats us to the second of the two plays. Entitled The Silence, this one sees McDiarmid take on the role of the composer Sibelius during his final days.

Sibelius’ story in The Lemon Table is another musing on life, death, and growing old. We meet the composer towards the end of his life – drunk, miserable, and full of anger aimed both at himself and the figures in his life.

Here, McDiarmid’s performance is much more physical than in Vigilance. He paces the stage in anger and frustration, lamenting to the audience about his challenges in life, particularly his case of writer’s block.

The principle prop is a single bottle of whiskey, both the source of Sibelius’ inspiration and pain. Once again, McDiarmid gave a tour-de-force performance. His use of space was excellent as the small theatre aided the sense of claustrophobia the audience felt.

Additionally, the simple set allowed McDiarmid to showcase his talents, taking full advantage of the small space he climbed on the table in a way that never felt melodramatic.

Oftentimes, performers and directors will use props and sets to heighten the drama and make big, bold statements to the audience but instead McDiarmid feels small and meek. The drama isn’t one of explosion, but one of implosion. The audience can’t help but feel pity for the artist on his deathbed, despite his rude and caustic nature, because his struggle is so human. The desire to create is intrinsic to human nature, and one that everyone in the audience could relate to.

Now, praise here must also be given to the team of creatives behind The Lemon Table. Michael Grandage and Titus Halder’s direction is clever and subtle. Their staging is simple yet subtle whilst Frankie Bradshaw’s set looks beautiful despite consisting of a table and two chairs. When taken altogether, these elements, alongside Paule Constable’s lighting and Ella Wahlströhm’s sound, create a melancholy tapestry brought to life by an impeccable performance from Ian McDiarmid.

Ultimately, the themes explored in The Lemon Table are nothing new because they are as old as time itself. However, the power of McDiarmid’s performance and the way he brings these flawed men to life are what makes the play so exhilarating to watch. The creative elements also facilitate this exploration of mortality and age, allowing the audience to enjoy a simple yet wholly effective treatise on what it means to be human.

Returning to the theatre after 18 months of absence made the theatrical experience even more enjoyable, and this was the perfect play for it.

The Lemon Tree closes at HOME this weekend before ending its run in Malvern next week.