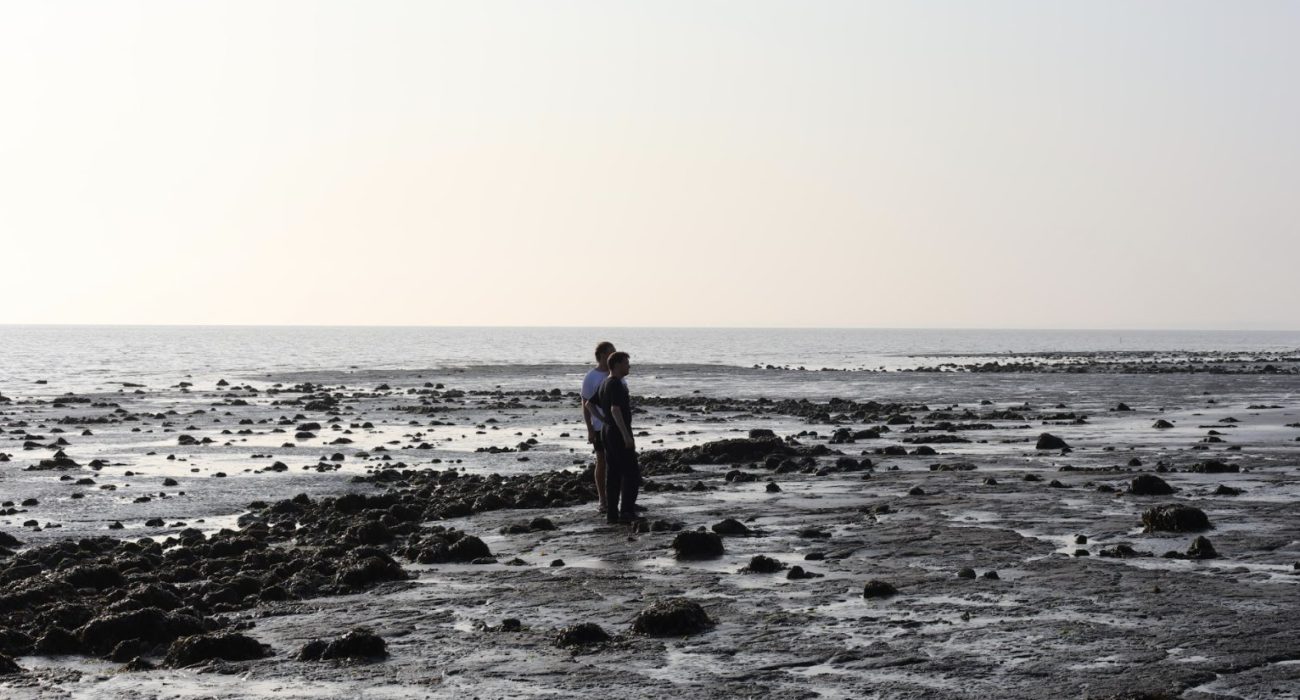 caroline are an 8-piece band from London. Their music is melodic and cathartic and is almost hypnotising in live performances and their recordings. The band started with just 3 members: Casper, Mikey and Jasper.

But they expanded more through finding more sounds and instruments they wanted to incorporate into their music. caroline are currently working on releasing their debut album which is due to be released via Rough Trade next year, but have already garnered plenty of attention and critical acclaim through the release of several singles.

Last week I spoke to Mikey, Jasper, and Ollie of caroline whilst they were on their way to play at Oxford’s Fusion Art Centre. On 8th October they played a fantastic gig at The White Hotel in Salford before continuing through the UK.

How has the first tour been? Have you been enjoying it?

Jasper: It’s been good. We’ve been in London and Manchester, Birkenhead on Sunday, and Oxford tonight. Bristol tomorrow. We haven’t taken the songs to many places outside London, so it has been nice to play to some new people. Obviously because of the pandemic we’ve been waiting forever to go and it’s relieving for it to finally come around. We’ve met some nice people too, so it’s been really fun and I think it’s going well.

Am I right in thinking a couple of the band members, including yourself, went to the University in Manchester? Was it nice being back at the White Hotel? Did you used to go yourselves as students?

Mikey: Yeah we did, I think it opened towards the end of our time in Manchester. We used to go to the club nights there and I’m not sure they even did gigs initially. We didn’t go to any shows there, just club nights. Just me, Jasper and Ollie went to Manchester and that’s where we met. We had an amazing time up there and the music scene was great. It’s really nice to be back and we have some old friends who are still in Manchester, so it was really nice to see them there.

I saw your improv set with the three of you at The Windmill in July. Is that reminiscent of your earlier sound before the rest of the band joined?

Ollie: I think it’s similar in the sense that it was just me, Mikey, and Jasper. But I think it’s kind of an evolution as when we first started playing together in 2017 we weren’t really as into improvisational music then. Since then, Jasper has been going to Café Oto more and setting up improvisation evenings. As a wider group of friends we’ve gotten more into playing that sort of music together. And over the pandemic when we were writing a lot of this album. Us three played more together and played more freestyle. So, the thing you saw at The Windmill was more along those lines. We developed a style of playing that was playing off one another but in a bit more of a messy way that we really enjoyed and want to do more of in the future.

Café Oto is a music venue in London that is known for the performance of more experimental music that might not necessarily fit into the mainstream. It’s also a place for free improvisation.

The idea of broken loops features a lot in your music. How did that first come about and is that something you’re going to be playing on more with the album coming up? Or is it an idea you’ve kind of had your fun with for now?

Jasper: No, I think that is most relevant in ‘skydiving on to the library roof.’ We definitely want to develop more and there’s elements of that in the album that’s coming out next year. I think in many ways, for me personally, I’m limited in what I can play on guitar, so playing loops and repeating things is something I can do within those limitations. So I’m definitely going to carry on doing that. But as a band I think it’s something that we like the sound of. Breaking and cutting things up. We’re looking to continue to explore that.

Where did you get the idea from originally? Did it happen naturally?

Jasper: It’s difficult to phrase. When it comes to ‘skydiving on to the library roof’ we definitely enjoyed playing repetitive things and building up the dynamic arch of the song.

You’ve been inspired by Appalachian folk? What’s distinctive about it and how does that influence your sound and songs?

Ollie: Compared to European folk music it’s done in open tuning so you can get away with long drones. A lot of the Appalachian folk instruments were quite rudimentary. Not the same precision as more Western styles of music at the time, like Western classical. It filters down into Irish and Scottish folk which is a bit more precise. So that messier style plays into our music. It lends itself to the improv that we do with caroline.

I was wondering about the functions of vocals in your music, do you consider them another layer of instrumentation or a personal element?

Jasper: Primarily an instrumental textural layer is how we think about it. But they function differently in different songs. There isn’t always a particular lyrical focus. It varies a bit. Sometimes the lyrics are important but most of the time they are an element in the composition just like the other instruments. Or they’re just a sound instead of lyrics and words if that makes sense.

Do you play the cello and the drums a bit as well? I saw that you switch drummers in sets. Is that for a particular reason?

Jasper: Just because we always did it like that. I originally wrote the drum parts so I still do sometimes.

The band started as just the three of you right? How did you grow into the 8-piece you are today?

Mikey: I don’t really remember. It happened so casually. There were no specific plans to keep expanding. We probably started when we thought ‘ah yeah this sounds really good with a violin.’ I think there was a song where we wanted Jasper to play the cello but we wanted a drum part as well, so we asked a friend to come and play drums for it. It was also just kind of what we needed and then it sort of solidified into a band after a while.

Is there a conductor of sorts or someone leading it when you perform?

Mikey: Kind of a mix. Often someone is sort of leading depending on the songs. I guess it depends on what part that person is playing. It always changes and evolves especially when we are doing a burst of shows.

When I’ve seen you play, you have quite a unique performance style, performing often on the floor rather than the stage and in a circle all facing each other, why is that?

Mikey: It’s a functional thing but I think we’re aware that it’s a cool way to experience watching a band as well. We did a few shows in a line but it was so weird. We couldn’t see each other. Until we performed in a line we didn’t know that it was a requirement that we needed to all see each other. It was weird because we couldn’t actually communicate like we normally did. The way we performed had to be completely good and we needed to do it how we rehearsed. Often stages aren’t big enough so that’s why we started going on the floor. It’s definitely a bonus that it’s a nice way to experience the music. Now we focus all our energy into one point in the middle of the circle that you can kind of feel when you’re playing it. It sounds weird but it’s so different to playing in a line. I never want to do that again.

Yeah and definitely from the audience’s perspective. I’ve really enjoyed it and I think it creates a more immersive and intimate experience.

Mikey: That’s really good to hear, I hope so. The only difficulty is that it makes the sound engineering quite hard. It’s been good on the tour because we spent a lot of time tweaking things. But it used to cause us a lot of problems before we knew what to ask for or knew we needed to spend a longer amount of time on it before a gig than we were willing to. Sometimes it means we can’t be as loud as we want.

Great chatting to you guys and hope the rest of the tour goes just as well!

If you want to listen to some of caroline’s work check out their EP ‘Skydiving onto the library roof’: